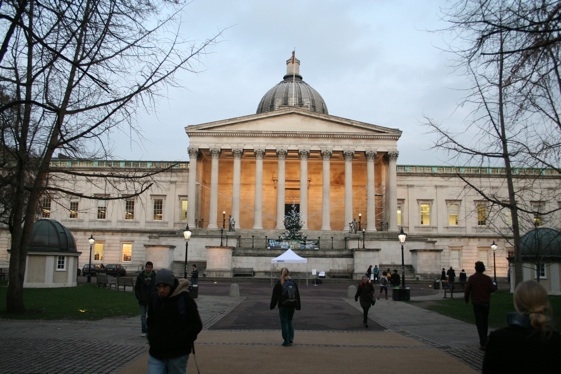 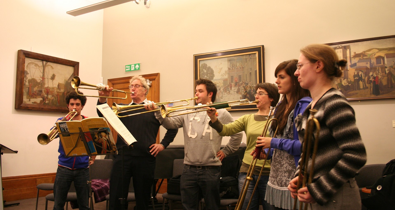 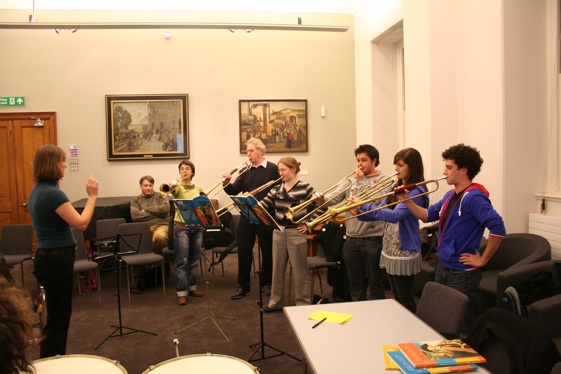 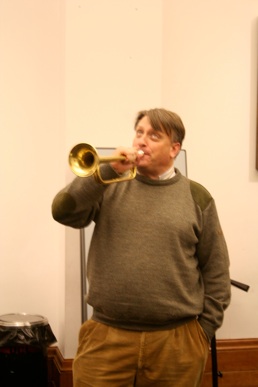 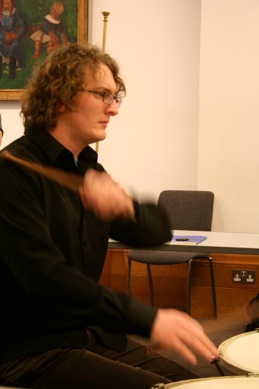 Stephen Burke - We were very fortunate to have a “Bass Natural Trumpet player” (otherwise known as a Timpanist) in the form of Katie’s Husband. 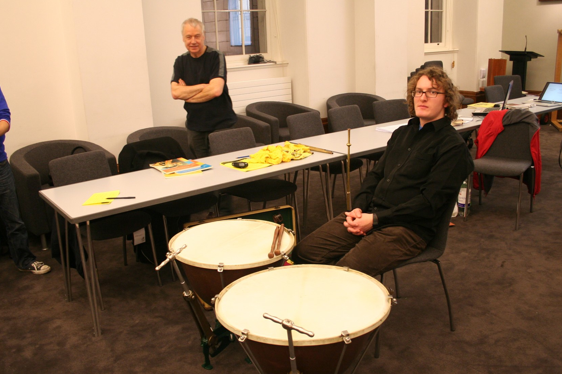 Katie Hodges and I were asked to co-present a talk for the University College of London (UCL) Music Society. Bill Tuck (who we met in Edinburgh in July (See Lituus Project) had arranged a performance of Handel’s Messiah (amongst other things) which would use “ventless” Natural Trumpets (Natural Trumpets without finger holes). As this is a rare occurrence in Britain, it was decided that we should give a lecture about it too, a fantastic idea.

Bill delivered a brilliant lecture on the iconography and posture of trumpet players over time. He looked at trumpet players from Chris Botti to Valentine Snow (and many in-between) and analysed their stance from  both in a historical and musical perspective. It was a most interesting and informative lecture.

Our lecture was entitled “Original Instruments, Original Ears?” in which we talked about the history, use, symbolism, tuning and articulation of the true Natural Trumpet and compared it to the Modern Trumpet, as well as Piccolo Trumpet and Baroque Trumpet (with finger holes). We gave practical demonstrations where possible, played duets and played recordings of J-F Madeuf (Katie’s Natural Trumpet Teacher in Basel, CH) and the Baroque Ensemble De Swaen (Mike Diprose).

After the lecture we had enough trumpets between myself, Katie and Bill to provide enough to do some larger ensemble work with Timpani. During the workshop we played larger ensemble pieces by Dauverné and C.P.E Bach’s “March to the Arc” - which we did in two choirs (as we had six trumpets and trumpeters). The results were fantastic in a relatively short space of time. It is hoped to do similar events in the future as it was enjoyed by all who attended.

The following Tuesday was the performance of the “Glory to God” and “Hallelujah” (Chorus) from the Messiah with ventless Natural Trumpets. Myself, Katie, Bill and Steve performed the “Sinfonia and Gavotte” from Atalanta and later Katie played fantastically in Purcell’s “Sonata No.1” for Trumpet and Strings. We also played some Carols on the modern Bb trumpet as well as Vaughan Williams’ “Fantasia on Christmas Carols”

I thoroughly enjoyed the opportunity to perform without holes and would like to thank Bill Tuck (in particular) and those who attended at UCL for contributing to such a fantastic event! 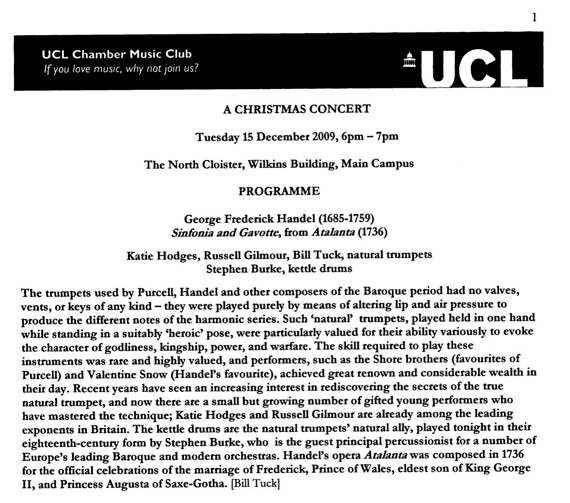