Wednesday, 24 Mar 2021, 20:00
Prof. Dr. Edward Hankins Tarr (b.15/06/1936 Norwich, Connecticut, USA - d.24/03/2020 Rheinfelden, Germany) was a pioneering performer and one of the most esteemed modern scholars of the natural trumpet. His research, editions, articles, dictionary entries, and books are indispensable to any student of the trumpet or natural trumpet. His translations of Bendinelli, Fantini and Altenburg’s treatises, his book 'The Trumpet', and his numerous performing editions are notable among his extraordinary output. Obituaries were featured in the New York Times, Historic Brass Society and International Trumpet Guild, among many other tributes.

It has now been a year since Ed’s death. The extensive time I have spent at home over the past year has brought the opportunity to read or re-read many of the books on the bookshelves at home. Resultantly, I have studied so many of Ed’s publications recently, and I have realised what a debt I owe to this great scholar. Although I would be the first to acknowledge that I did not know Dr. Tarr all that well, it felt remiss of me not to have written a little something about him on my website, by way of a personal tribute:

I had the chance to meet Ed during a Bach Christmas Oratorio tour in December 2010 with Le Concert Lorrain; my first substantial tour as a professional musician. We performed in Saarbrücken, Metz, Frankfurt, Lorient, Lyon, Lutry, Basel, and Burgos. [It was also a memorable December on account of the heavy snowfall across Europe that month, which often made our arrival at any venue, against all travel adversity, nothing short of miraculous. Flying was incredibly unreliable that December, and there were so many travel dramas on that tour!]

On the morning of our performance at the Stadtcasino in Basel on 20th December 2010, David Staff had been in contact with Ed (they were old colleagues). The then 74-year old Ed had invited the three of us in the trumpet section for that evening’s Christmas Oratorio (David Staff, myself and Stephen Gilbey) to visit him at his home. Ed lived near Rheinfelden to the east of Basel, just over the German border - in the hills of the Rhine valley. The Schola Cantorum Basiliensis (where he taught between 1972-2001) and the Bad Säckingen Trumpet Museum (where he was the first curator, from 1985) were equidistant.

During our visit, we played natural trumpets [i.e. without holes] together in Ed’s trumpet studio, a combined practice room, instrument store, office and library. He showed us some of his instruments and we discussed interesting items from his library. I remember handling one of his original 18th century Haas trumpets, which was very heavy indeed; we joked that you would need a tripod stand to rest it on while playing it!

Ed, Steve and I played through some of the Bach books together. David was very sensibly saving himself for playing first trumpet in the Christmas Oratorio performance that evening. We played through several pieces. I remember playing first trumpet in the Himmelfahrtsoratorium [BWV 11] in Volume 3 of the [Carus, Stuttgarter Bach-Ausgaben] Bach for Brass books - edited by Edward H. Tarr and Uwe Wolf. Steve Gilbey played second and Ed Tarr played third trumpet. In the final chorale [No.9] ‘Wenn soll es doch geschehen’, we played through the first two pages counting just one or two bars rest at each printed rest. Bar 50 approached at the bottom of the second page. This tricky passage (D, F#, A, G, B, A, G, top D, A, C, B, A, B, C, top D) immediately precedes one of the few awkward page turns in the entire set of these Bach editions. We played bar 50, and as soon as I had played it, I remember thinking: ‘I couldn’t do that (so well) again!’ - It just sort of jumped out, in one of those rare, unrepeatable triumphs of musical dexterity - something of a clarino moment. We were all slightly taken aback, and we all completely missed the next entry. In fact, Ed neglected to turn the page for the next entry, so it ground to an immediate halt. Ed turned and looked along the section towards me. He said something like ‘that was exceptional, Russell’ and gave the first of several approving smiles. He apologised for missing the page turn, and we carried on playing. I’ve fixed that particular page turn in my book by turning the page early, and writing out the preceding bars alongside. Every time I have performed that piece of music since, I think of Ed’s beaming smile, and it reassures me before I play that particular bar!

After playing a substantial chunk of the Bach books together we retired to the living space in Ed’s ‘H’-shaped home. As I remember, he and his wife had their own workspaces and music studios in the vertical sections of the ‘H’, and the shared living space was in the horizontal crossbeam-like connecting annex. We went downstairs into a reception room, and Ed sat at the grand piano. A rendition of ‘Ain’t She Sweet’ began playing on the player piano - which had been ‘programmed in’ to the wax paper by the pianist Fred Pearson [or Fred Pierson?] at the turn of the 20th Century. Ed looked down at the unravelling paper scroll. He pointed out the words as they passed, sang along occasionally, and showed how to adjust the tempo. The keys of the piano depressed themselves and the sound recreation was, of course, entirely acoustic. This was the best ‘recording’ I had ever heard. Ed was clearly so proud of this acquisition, and he seemed to love that we loved it too. He joked that he liked to sit at the piano as his guests came down the stairs, so that he could pretend that he was playing. I took a short video on my iPhone. This was in the relatively early days of iPhone videography, and I wasn’t sure if I was being rude by filming it. I’m glad I did film it though, as the footage captured one of Ed’s aforementioned proud, radiating and beaming smiles. 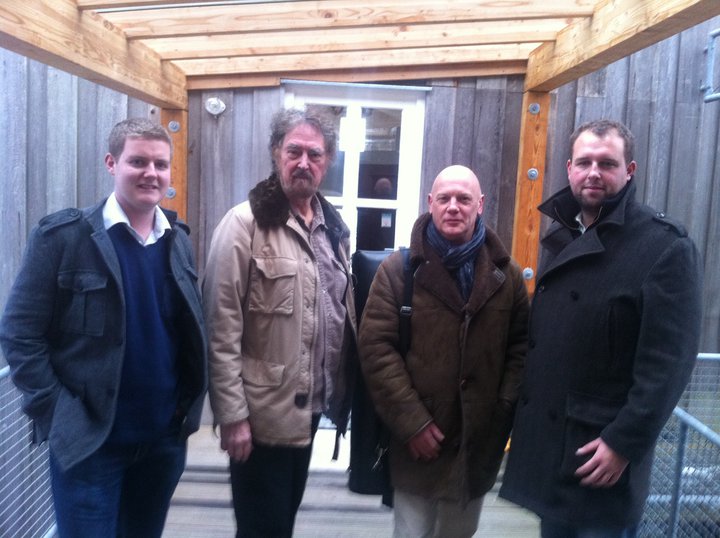 (L-R: Russell Gilmour, Edward H. Tarr, David Staff & Stephen Gilbey)
As we left, Ed said “I’d like to congratulate you all on being such thoughtful trumpeters” and gave us another beaming smile.

During our time together I had asked Ed whether he had any plans to do an edition of the Hummel Trumpet Concerto. (Since I moved to London in September 2010, I had developed something of an obsession with Hummel’s manuscript. I was especially fascinated by the different coloured inks used in it. I had been to view it [Shelf Mark: 32222] in the British Library on numerous occasions.) He replied: “Well Russell, I think I might have something that will interest you on that matter.” After the Christmas Oratorio tour, Ed and I exchanged a few emails on the subject of Johann Nepomuk Hummel’s trumpet concerto of 1803. He was interested to know what I thought, as I had visited the manuscript in person. I believe Ed had only studied the microfilm of it remotely. He kindly let me read his commentary before it was published:

“...to reward you for your curiosity and interest - I am sending you the English version of my Hummel commentary. You can probably figure out the musical examples for yourself. Obviously I hope you keep this to yourself - and I also hope the final published version will find enough interest to have justified the project in the first place. If you have any comments to make, now is the time.” - Edward H. Tarr - 22/01/2011

Ed asked for my thoughts on his final draft, before he published his critical edition, and a facsimile edition of the manuscript score. This resulting colour reproduction of the manuscript is one of the finest books I own; the attention-to-detail is remarkable. Ed even went to the trouble of copying, and positioning in-situ, two glued-in flaps of paper (as per the original) - showing what was replaced and what lay beneath.

I had nothing to add to Ed’s already perfect writing, other than to ask further questions that could only be answered hypothetically or conjecturally. However, Ed was kind enough to say:

“It is very nice indeed to discuss this with you. So often an editor writes his wise words without having a chance to consult with anyone …” - Edward H. Tarr - 10/02/2011

It was a great pleasure and privilege to meet Edward H. Tarr. A kind, gentle and modest man, and truly one of the great pioneers and advocates of our instrument.