Tuesday, 14 Jul 2009, 19:00
The project is the result of a collaboration between the Schola Cantorum Basiliensis and the University of Edinburgh. The project has involved a great deal of research into this forgotten early brass instrument. Traditional methods and the use of specialised software to model the bore profile have been used to build a pair of Lituui, which were brought to Edinburgh by Mike Diprose from the Schola in Basel.

I was very fortunate to ‘have a go’ on the Lituus and found them to respond beautifully. The bore profile and design of the instruments was constructed by Ph.D. students from Edinburgh University with Arnold Myers, constructed by profiling similar instruments from the Reid Hall Collection. I believe that software was developed to make sure that the Alphorn maker (who had been commissioned to make the two Lituui) would be able to get the instruments ‘right first time’. 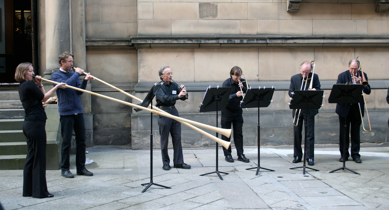 L-R: Katie Hodges (Lituus), Mike Diprose (Lituus), Murray Campbell (Cornetto), (Alto Sackbutt),(Sackbutt), Arnold Myers (Bass Sackbutt)
The group pictured above (in conjunction with a chamber choir) performed Bach’s ‘O Jesu Christ, meins Lebens Licht’ (BWV 118) outside the Reid Hall in Edinburgh (July 12th, 2009).
This curious piece was originally intended to be performed at funerals, where trumpets, which were traditionally associated with celebration, were not played - for obvious reasons. As you can see in the above example, the Lituus parts use the notes of the natural harmonic series (as does the natural trumpet). Cornett and sackbutt music has long had an association with funeral music. The warlike sound the natural trumpet is capable of producing is not appropriate in this setting. So, Mike Diprose and his colleagues set about reconstructing a possible solution to this enigma, basing the research on a range of historical and ‘surviving’ sources (for example: wooden alphorns).
The Reid Hall was an excellent venue for the talks about the Lituus and lectures on acoustical and instrument sciences.
A few days later (14th July 2009) Mike Diprose, Frank Tomes, Bill Tuck and I, traveled towards Glasgow to take part in the inaugural BRaSS project. Brass Research and Scholarship in Scotland (BRaSS) took place at the Royal Scottish Academy of Music and Drama under leadership of Professor John Wallace. The day consisted of talks from Trevor Herbert, Reine Dahlqvist, Verena Jakobsen Barth, Rui Pedro De Oliverira Alves, Sandy McGrattan, Arnold Myers, Raymond David Burkhart, Mike Diprose, John Wallace  and John Webb. All of the lectures were really good and were on widespread subjects from the ‘Bach Trumpet in England’ (McGrattan) through to ‘Cornet and Trumpet Quartets in the United States (c.1872-1939)’ (Burkhart) as well as Mike’s contribution ‘Getting on with it. The “real” natural trumpet: its practical assimilation into current Historically Informed Performance (HIP)’ (Diprose). I was lucky to be assisting Mike in his contribution by playing the Natural Trumpet. We performed some short duets to demonstrate how two players can create three sounding frequencies by playing in Just Intonation (JI). He couldn’t do this alone, so I became his assistant (also helping start and stop the sound recordings).
John Webb was the last person to deliver his contribution, which particularly captured my imagination. His lecture was entitled ‘Signalling Brass’ and he covered a lot of information and had the instruments with him to demonstrate. At the end he invited us up to have a closer look at some of the instruments. I had a go on his Soprano Keyed Bugle (which was a beautiful example) and to his surprise I started playing ‘British Grenadiers March’ on it. I’ve never played such a good keyed bugle before, or since!
I was very glad that I attended the two events and would like to thank everyone involved for their tremendous hospitality. I met many interesting and like-minded people and will definitely be interested in future events! Attending the BRaSS and Lituus project have shaped the way I am going to approach my major dissertation for my final year of Undergraduate studies at the RNCM. 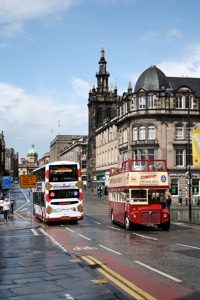 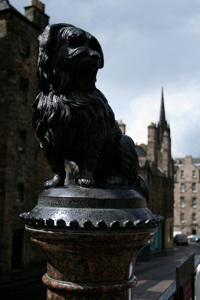 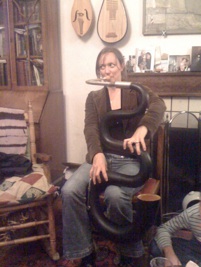 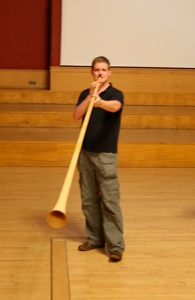