Saturday, 8 Feb 2020, 21:30
Performing Berlioz’s Symphonie Fantastique with the Aurora Orchestra was one of the most enjoyable projects I participated in last year. It was great to return to play with the orchestra in February 2020 for music by Beethoven and Mozart.

The orchestra rehearsed Beethoven’s Symphony No.1 in C [Op.21] on Wednesday 5th February 2020 at Morley College in London. We regrouped at London’s Heathrow Airport early on the morning of the 6th. After several hours of delays (due to fog) our flight departed for Geneva in Switzerland. 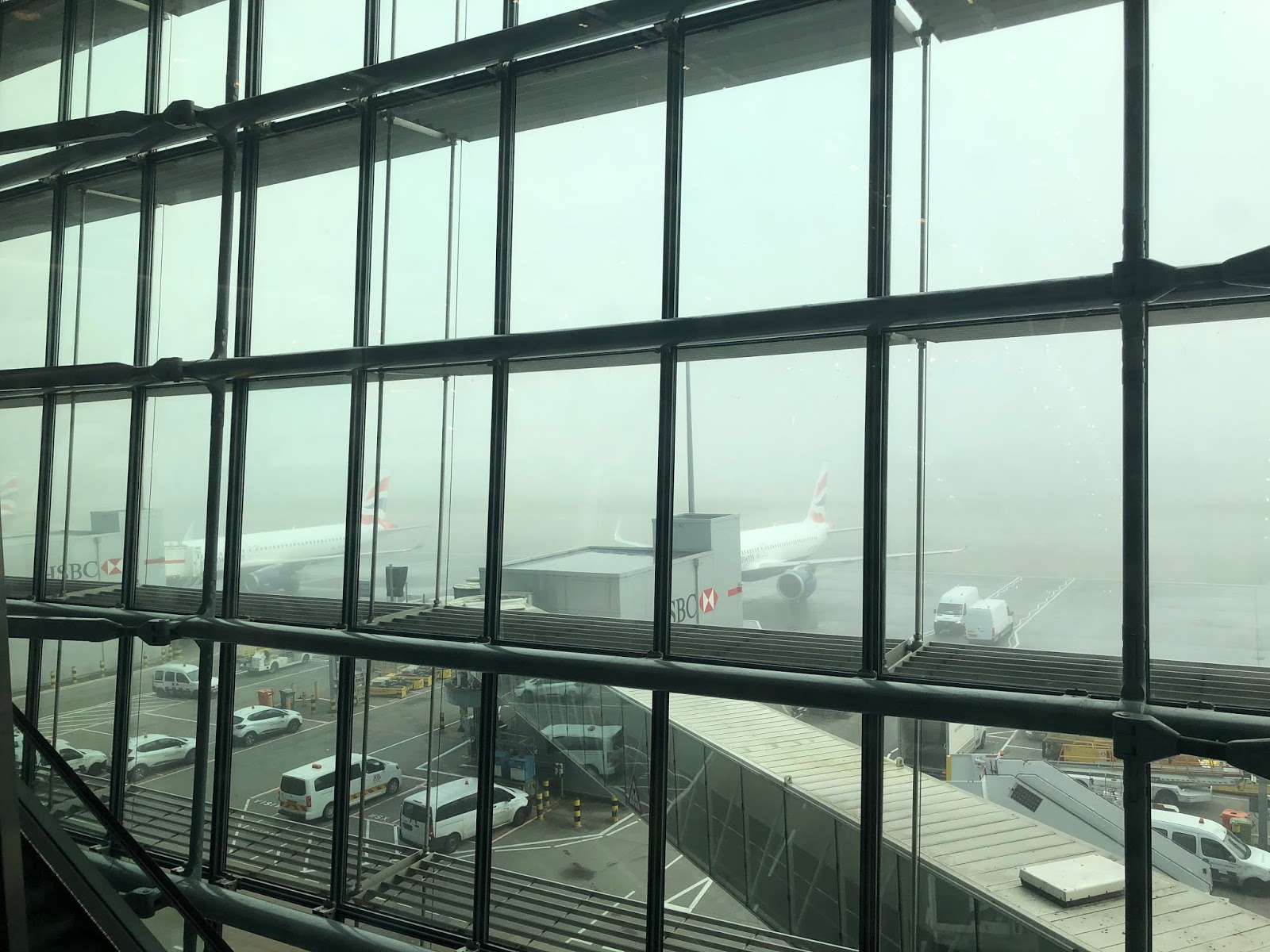 Upon arrival we were greeted by a gentleman wearing a music-themed tie who would drive the coach and trailer containing the larger instruments around Lake Geneva towards Gstaad. The scenery on the route was stunning. We stopped at the Roc et Neige Hotel in the snowy village of Château-d’Oex to rehearse Mozart’s Piano Concerto No. 24 in C minor [K. 491] with the American piano soloist Nicholas Angelich. His piano playing was immaculate. 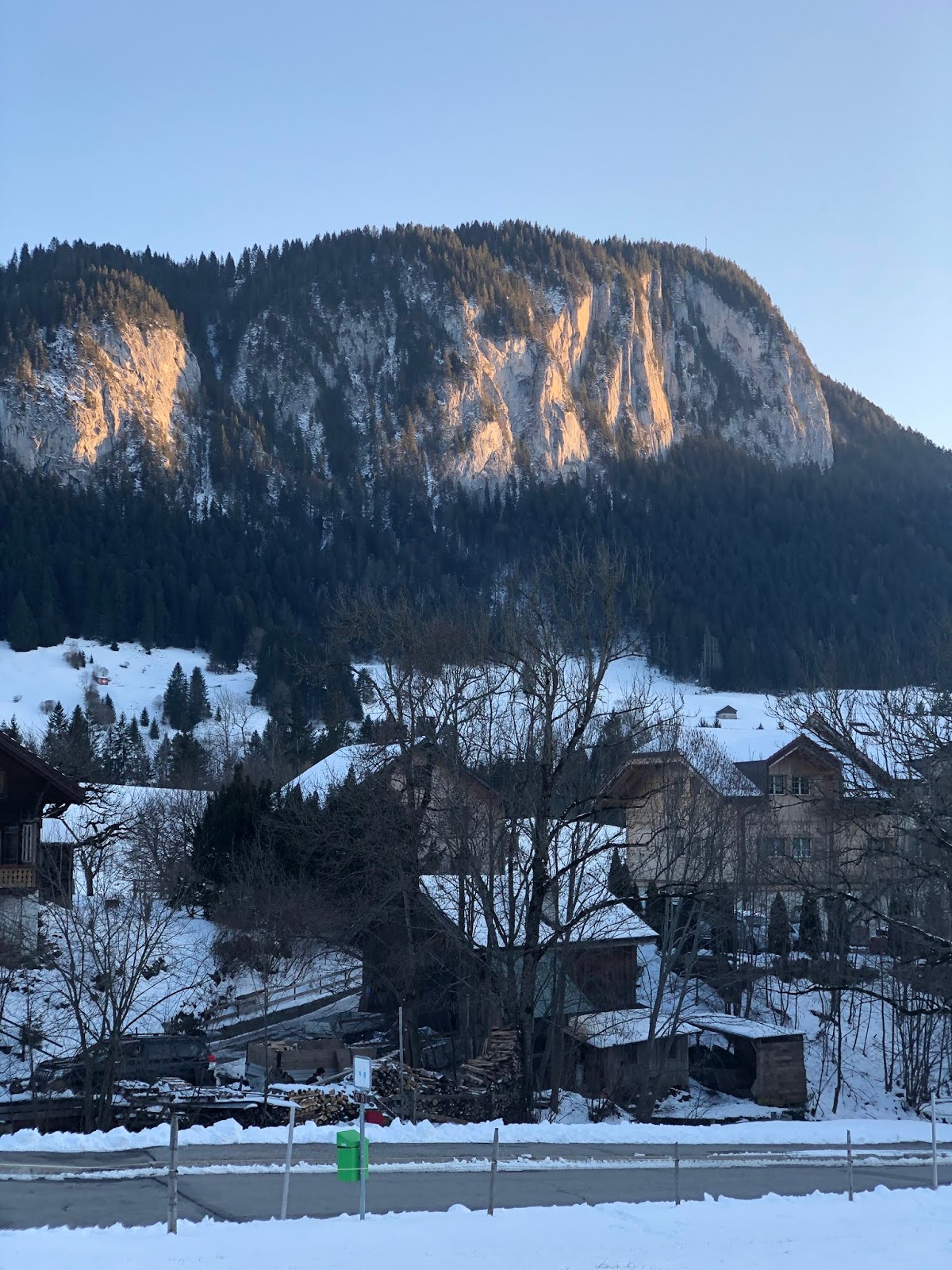 The two natural trumpet players (myself and Imogen Hancock) enjoyed an entire programme free from crook changes, which is something of a rarity when playing Classical repertoire on the natural trumpet. Despite this, Imogen and I did have to keep our concentration levels high during the rehearsals and performances as we had 203 bars rest in the first movement of the piano concerto, before a short piano cue and a trumpet entry. Teamwork paid off; we confirmed the count with each other at 50-bar intervals.
The coach driver listened to our rehearsal with great interest and he was most curious about the natural trumpets, and a lovely chap. He was an incredibly skilful driver too; able to effortlessly negotiate tight corners on these precariously icy alpine roads. He was also able to reverse the coach and the trailer with amazing precision, even beneath the overhanging gabled roofs of quintessentially Swiss chalets. 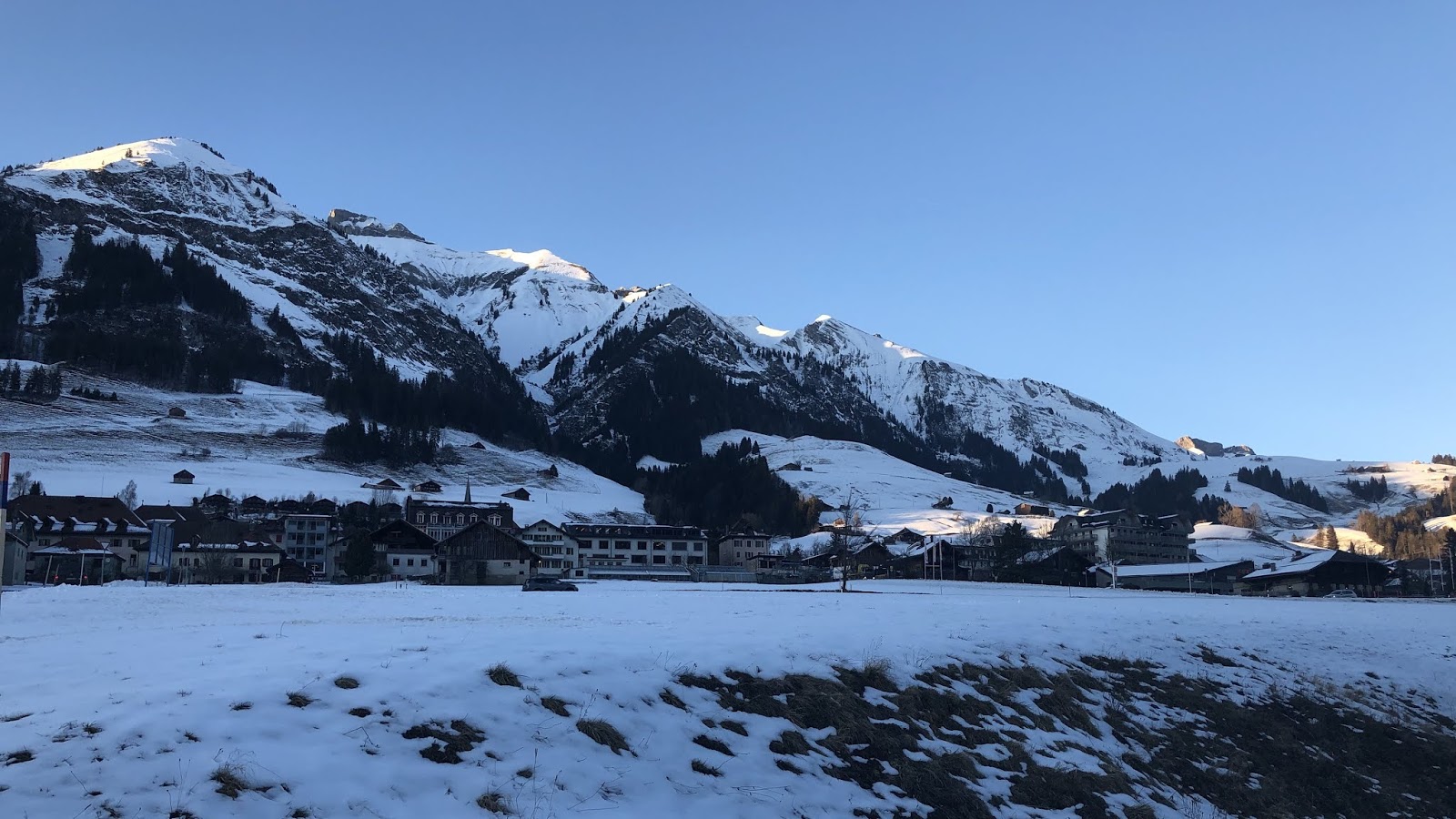 Fortunately the delayed flight had no significant impact on our schedule, and we continued on to a post-rehearsal dinner at the Hotel Landaus in Saanen. After a lovely evening, half of the orchestra (myself included) returned to the coach to travel a few miles to the Alpine Lodge Hotel, situated halfway between Saanen and Gstaad.

It had been a good idea to travel out the day before the concert, and it meant that we could enjoy a leisurely morning and early afternoon before a late afternoon rehearsal and evening concert. A group of us walked from the Alpine Lodge Hotel to Gstaad. From there we walked to the cable car base in the valley (at an altitude of 1050m). We each bought tickets (33 CHF) and took the Gstaad-Eggli cable car to the summit at an altitude of 1557m, enjoying stunning panoramic views bathed in glorious sunshine. We formed a group of 10 in Gstaad when we met up with the conductor, Nicholas Collon who was celebrating his birthday. All 10 of us fitted perfectly into one cable car and we ascended the mountain and spent time soaking up some sun, taking in the alpine views, and watching passing skiers or snowboarders. 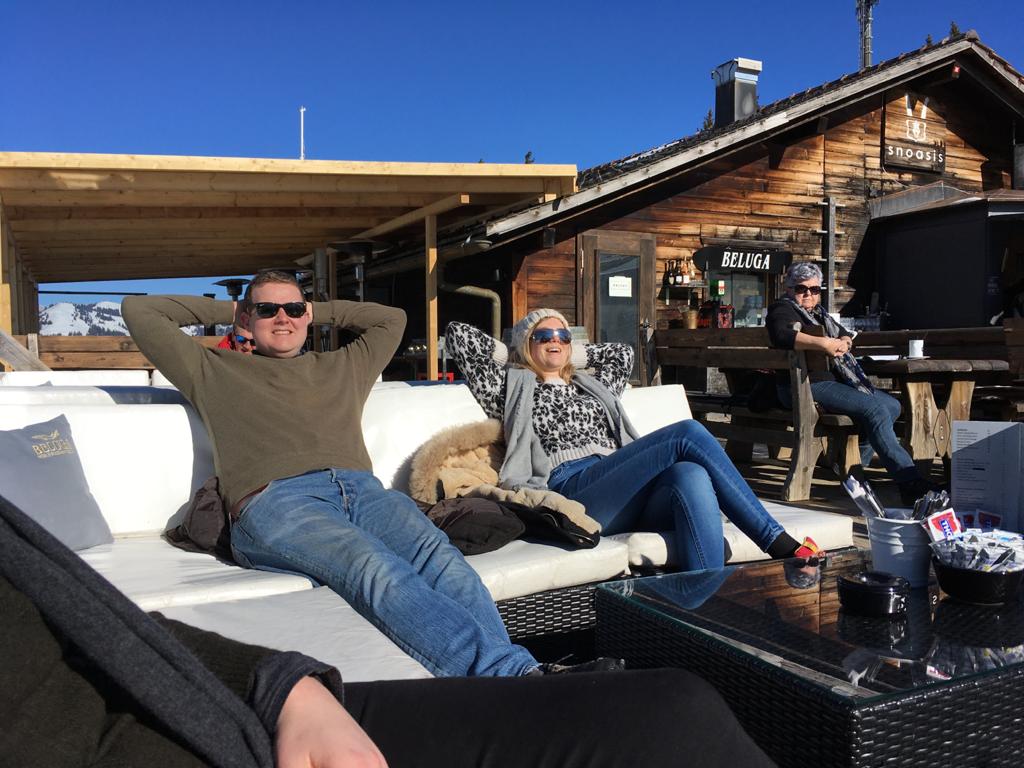 Aurora’s own Concerts Manager is clearly an accomplished skier. She had been particularly looking forward to this trip as she had organised to hire ski equipment for the morning. We saw her briefly at the top of the Gstaad-Eggli cable car before she attached her skis and skilfully slid off to the piste, which impressed our dectet, none of whom had ever skied. 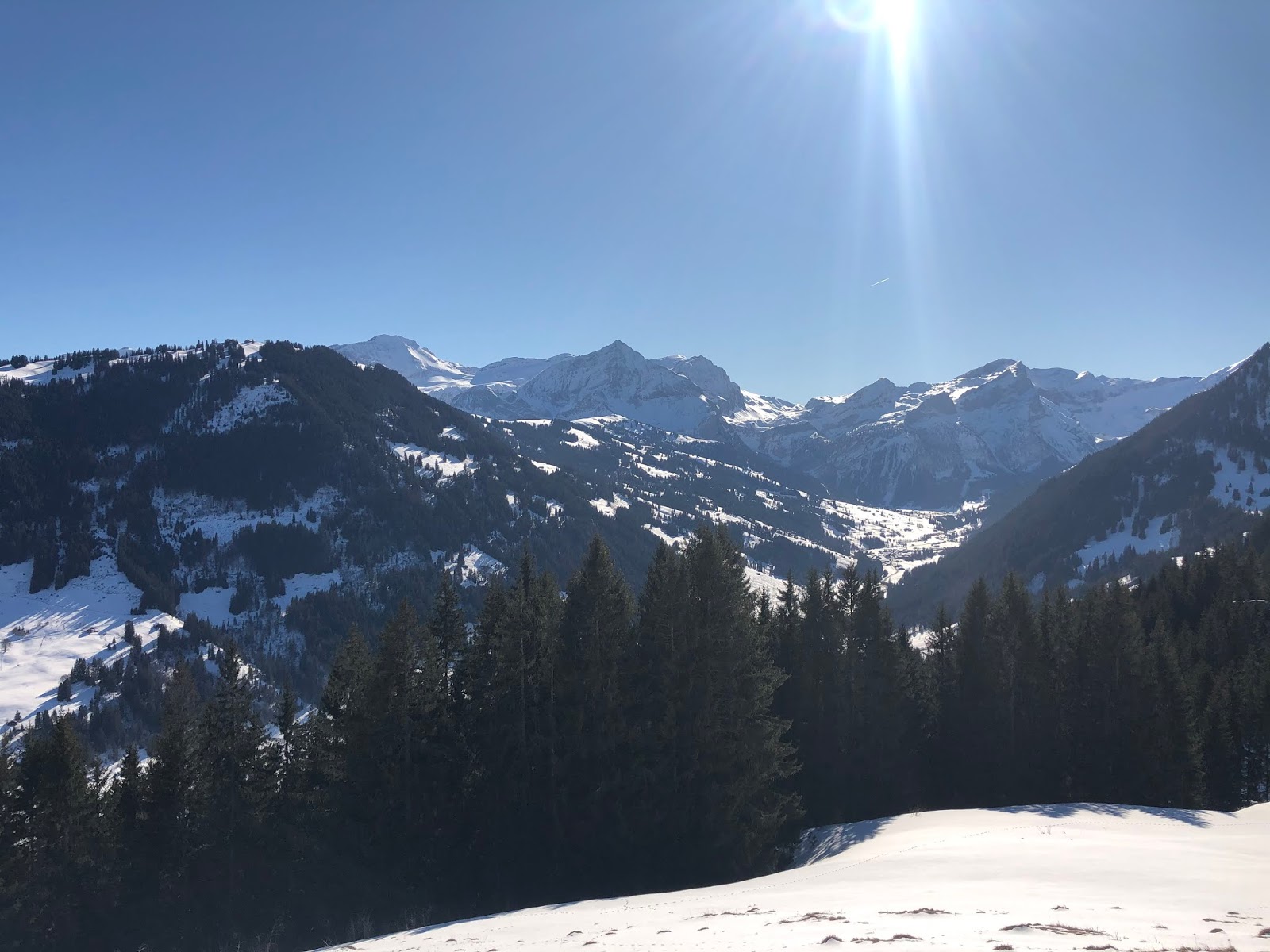 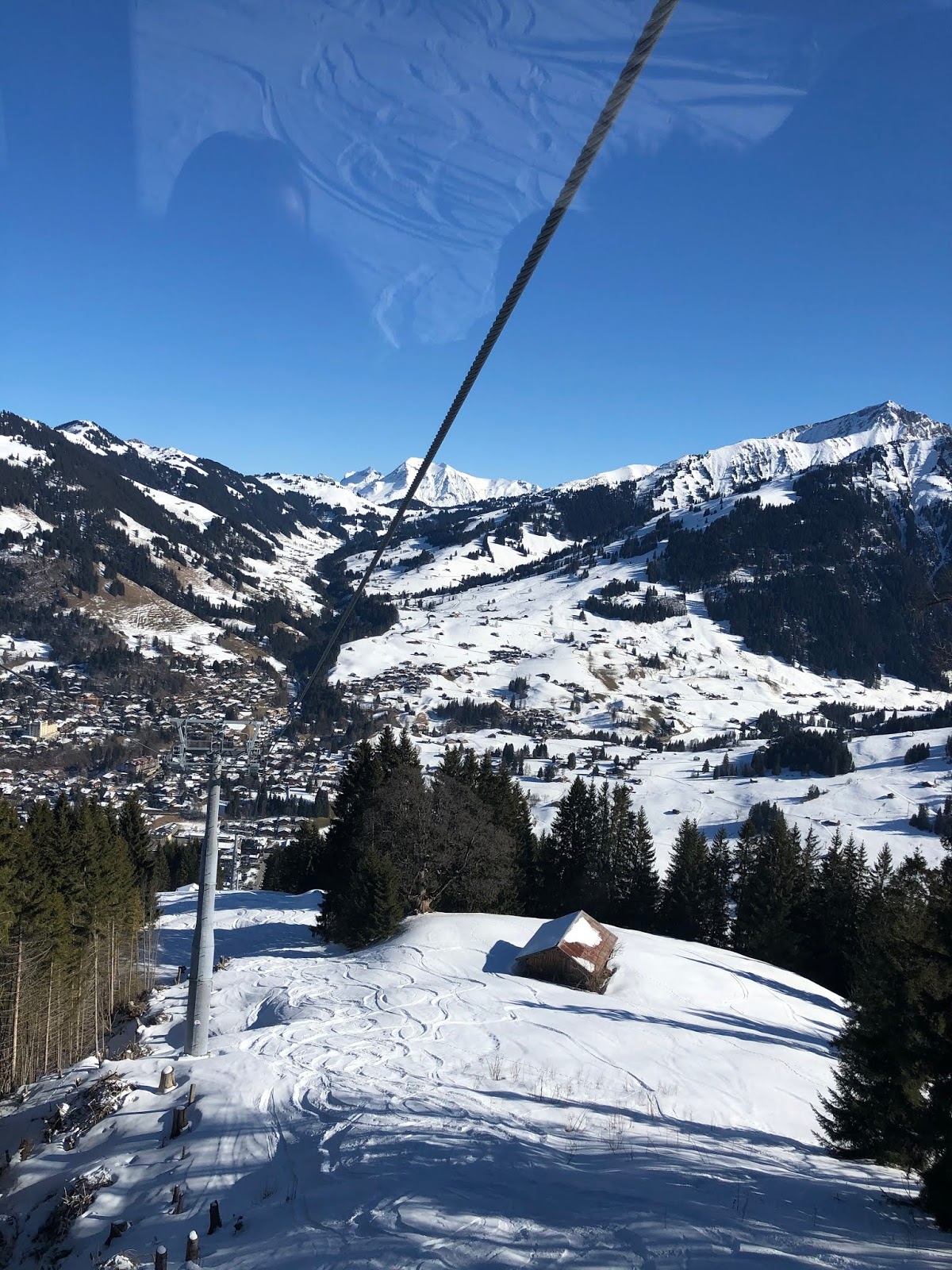 After a late lunch, we returned to the hotel and took the coach to the Église de Saanen where we would be performing. 17th-century murals adorned the walls, with interesting depictions of [perhaps single-slide] trumpeters. As I arrived, I looked at the concert poster for the 20th Sommets Musicaux de Gstaad Festival. I realised that I had narrowly missed seeing my friends in the Orchestra of the Eighteenth Century yesterday. They had been performing Mozart’s Requiem nearby while we were having dinner at the Hotel Landaus in Saanen. 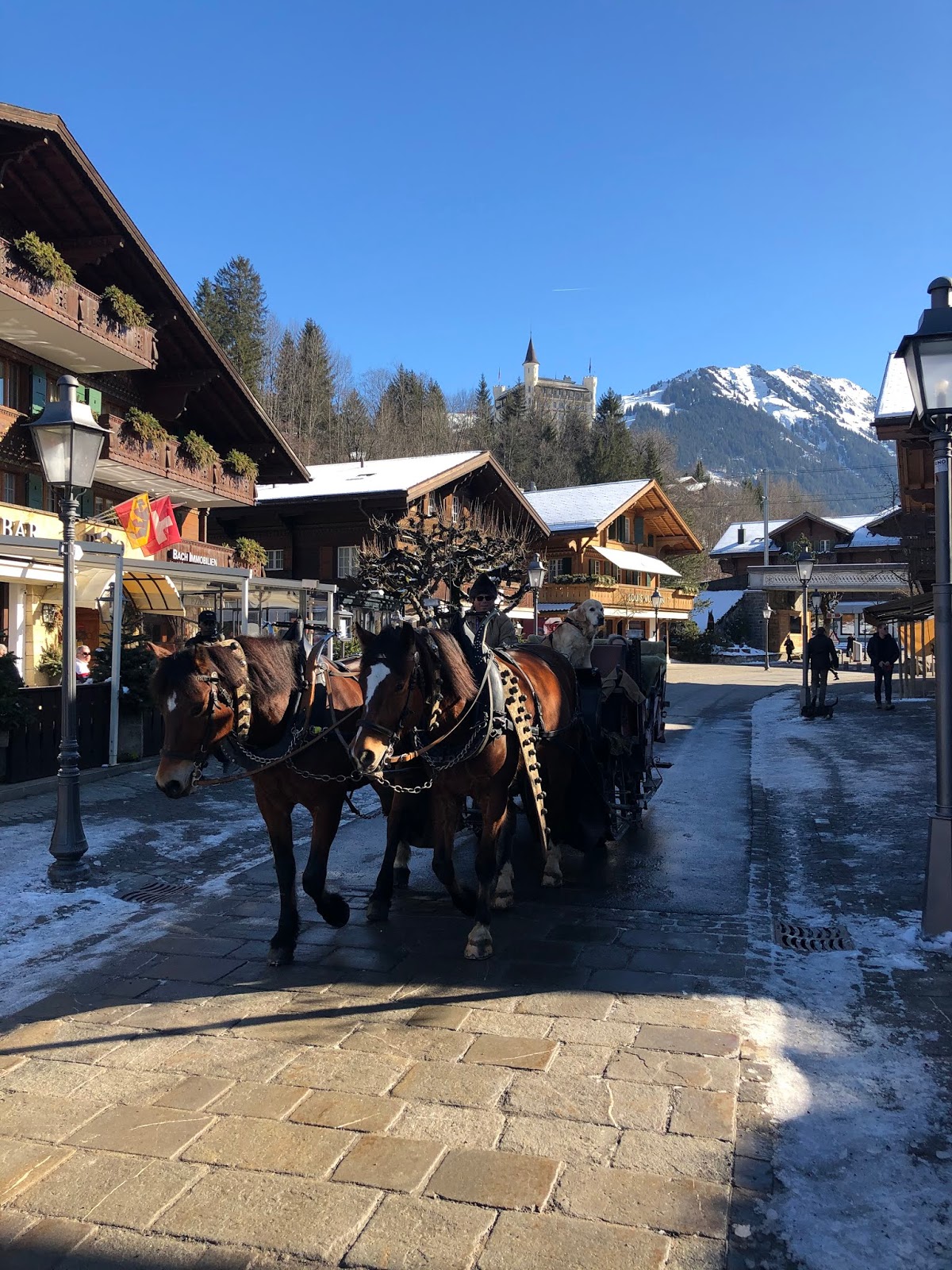 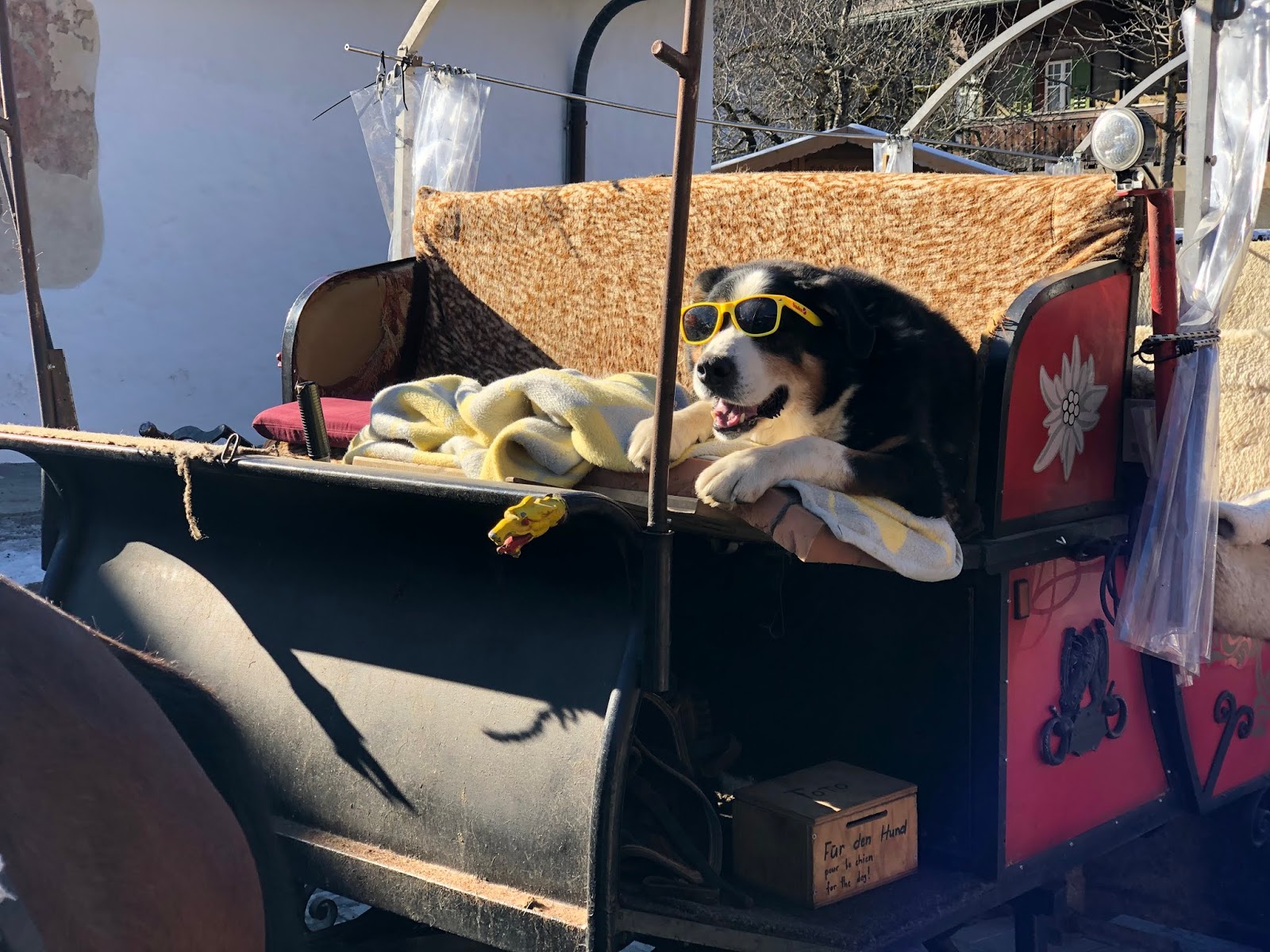 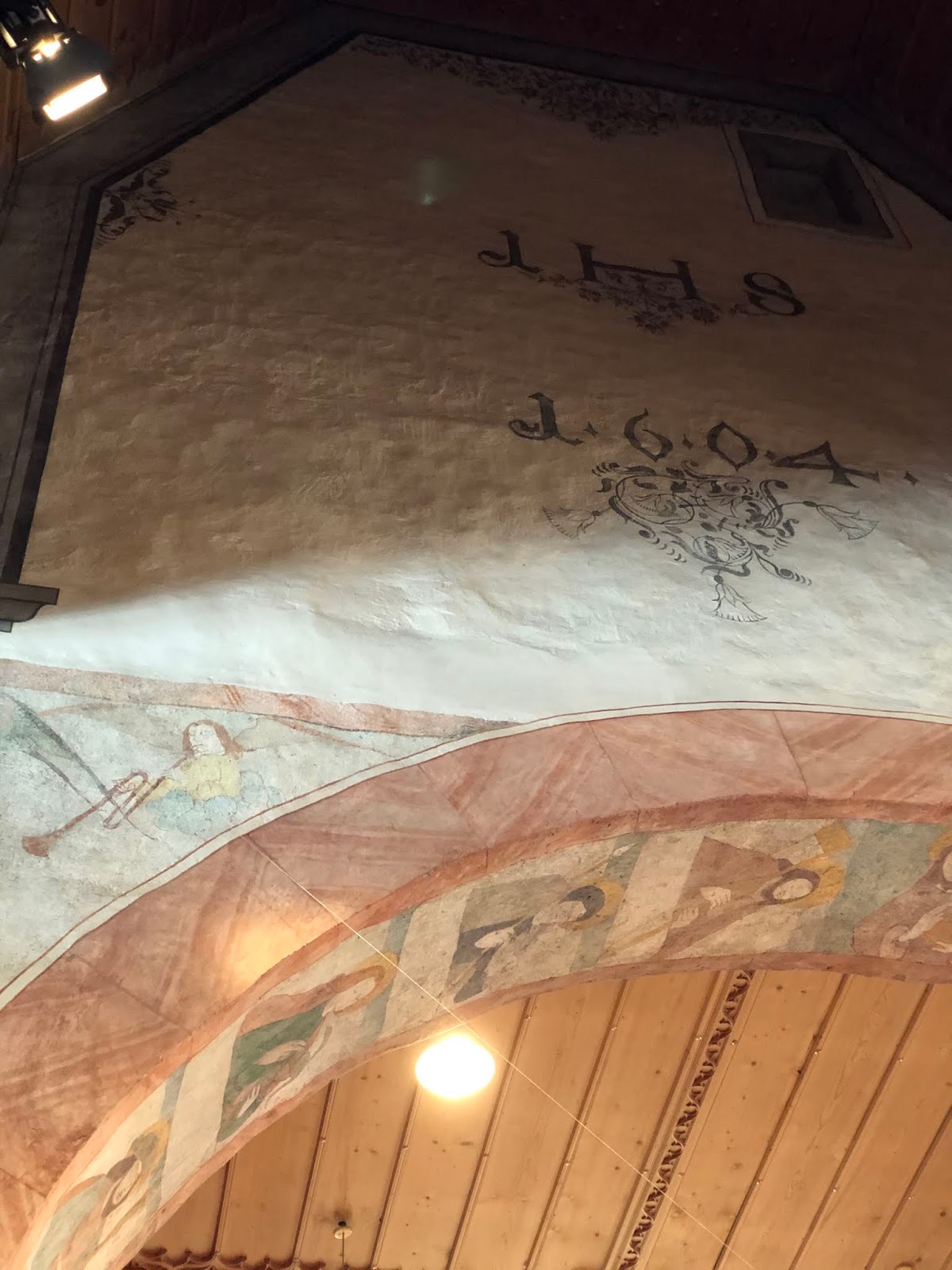 The orchestra was set up on the long and relatively narrow stage in the church and began rehearsing in situ. Technicians placed microphones in preparation to record the concert for a deferred radio broadcast on Wednesday 19th February 2020 on the Swiss radio station SRF2 Kultur. We surprised the conductor in the rehearsal with a rendition of 'Happy Birthday' in place of the second subject in the first movement of the Beethoven symphony!

The concert in Saanen was most enjoyable. The hearty applause after the concerto invited a solo encore from Nicholas Angelich. He played Robert Schumann’s Kinderszenen (Scenes from Childhood) [Op.15].I - ‘Von fremden Ländern und Menschen'. This piece transfixed and transported the audience (myself included). Hearing this piece reminded me of a video I used to watch (Milo & Otis) as a child at my Nan’s house on sick days off school. I don’t remember hearing it since I was at primary school. The piece ended; a satisfied, relaxed and nostalgic sigh preceded the applause.

After the concert, most of the orchestra visited a restaurant for a late dinner and those who had been on-piste all morning had a well-deserved après-ski. With alarms set for 05:30am local time (effectively 04:30am GMT), I went to bed as soon as I returned to the hotel.

In the morning a few of us waited outside the hotel to enjoy the last few moments of Saanen’s crisp air before boarding the coach for Geneva Airport. I stayed awake to watch dawn break over Lake Geneva on the trip to the airport. The orchestra flew back to Heathrow, and then dispersed. We still had a rehearsal and performance that evening, but there was enough time for some people to go home and others would manage to fit in a few hours of teaching. I opted to go straight to Kings Place. I travelled on the Piccadilly line with some of the viola players and we hatched a time-killing plan to go to the fantastic Dishoom (a much-loved Indian restaurant franchise, inspired by the old Irani cafés of Bombay) for lunch. It was absolutely fantastic.

I returned to Kings Place, undoubtedly in a haze of garlic and in a state of chilli-induced euphoria, and there was still a little bit of time before the rehearsal. As I was descending on the escalator towards Hall 1, I noticed artworks by the Isle of Man-born artist Bryan Kneale MA (b.1930) in the gallery entitled Nature Unwrapped. This gallery complements the concert series of the same name. I had also seen the posters outside advertising some 80+ concerts under this title, with so many fantastic artists involved - including dear friends from Vox Luminis and I Fagiolini.

We rehearsed the programme and the orchestra’s fantastic team ensured there was room for everyone on the compact stage. The orchestra would play in three different formations for three different pieces in this concert. The Kings Place concert began with an all-strings piece, entitled ‘Dawn’ by the Bulgarian-born composer Dobrinka Tabakova and it featured Alexandra Wood (solo violin) and Sébastien van Kuijk (solo cello). For the Mozart, the piano was placed at the front of the stage behind and to the left of the conductor, and the wind players were placed to the conductor’s right where the second violins would normally be. This worked very well for this piece, which has so many woodwind interjections with the piano.

Before the piano concerto, I waited backstage while the stage was being reset. Moments later, I found myself tying a bow tie around the neck of the piano soloist. Tying a ‘manual’ bow tie is difficult enough on yourself but it is exponentially more difficult to tie one around somebody else’s neck, and under time pressure. After a few stressful minutes I had tied a not-too-shabby bow tie around his neck. I left the dressing room, was handed my trumpet back and I went straight on stage in a state of mild panic which fortunately subsided quickly. As Nicholas Angelich entered the stage, I strained in my seat to check that the tie was still tied and acceptable in appearance. I thought no more about it until the end of the concerto, but I had visions of it untying and dropping onto the keyboard or something! Fortunately it was still in excellent condition at the end of the concerto. After the performance, Nicholas came over to me and thanked me profusely. The orchestral manager later told me they had found a pre-tied version soon after but didn’t want to disturb us again!

After the interval, the stage was reset yet again for the Beethoven symphony. The chairs were removed and we performed the symphony with the whole orchestra standing up. Even though this was not a memorised performance, it still maintained all of the other hallmarks of Aurora’s excellence.

The Kings Place concert was an absolute thrill throughout, and the symphony in particular felt invigorating. Benjamin Zander talks about being around people with 'shining eyes' and Sir Ken Robinson’s talks about those who are 'in their element'. The musicians in the Aurora Orchestra certainly both of these things.

I had enjoyed a fantastic few days playing in these two brilliant concerts. I really liked the formula of the project and although the last day had been something of an endurance test, it did not detract from the final performance at all. It was really great to finish the project with an exciting concert in London, rather than to finish the project at the luggage carousel at Heathrow Airport (as so many other projects tend to culminate in that way). I will be back playing with the Aurora Orchestra later in the year, and I’m already looking forward to it immensely.
Aurora Orchestra, Beethoven, London, Natural Trumpet, Switzerland, Touring
Russell Gilmour