Sunday, 4 Jun 2017, 22:00
I performed with Solomon’s Knot in Halle (Saale) and Regensburg in Germany. We performed the Dublin version (1742) of Handel’s ‘Messiah’ in the Dom zu Halle as part of the Halle Händel-Festspiele on Friday 2nd of June. Two nights later we performed in the Dreieinigkeitskirche in Regensburg as part of the Tage Alter Musik festival.

Rehearsals took place in London and the group worked to become accustomed with the Dublin version, which differs subtly in places and differs drastically in others. Once again, the singers of Solomon’s Knot performed ‘off-copy’. I played first trumpet, and I had decided to perform ‘The trumpet shall sound’ from memory. There was an open rehearsal performance on Thursday 1st of June at St. Michael’s in Battersea.

"The full-length 12/8 version of 'Rejoice greatly' was a pleasure to discover, and some unfamiliar cuts and truncations, as well as a complete new chorus ('Break forth into joy') kept us on our toes with this old favourite." - http://www.solomonsknotcollective.com

We flew from London Heathrow Airport Terminal 2 on the 1st of June. By then we had received news that the bass soloist from the rehearsals and the open rehearsal performance could not travel with us as his partner was now immediately expecting their baby to be born. He made the right decision not to travel as we received news during one of our rehearsals that his baby had been born, for which - many congratulations! His replacement was the Berlin-based bass, Simon Robinson - who did an excellent job. 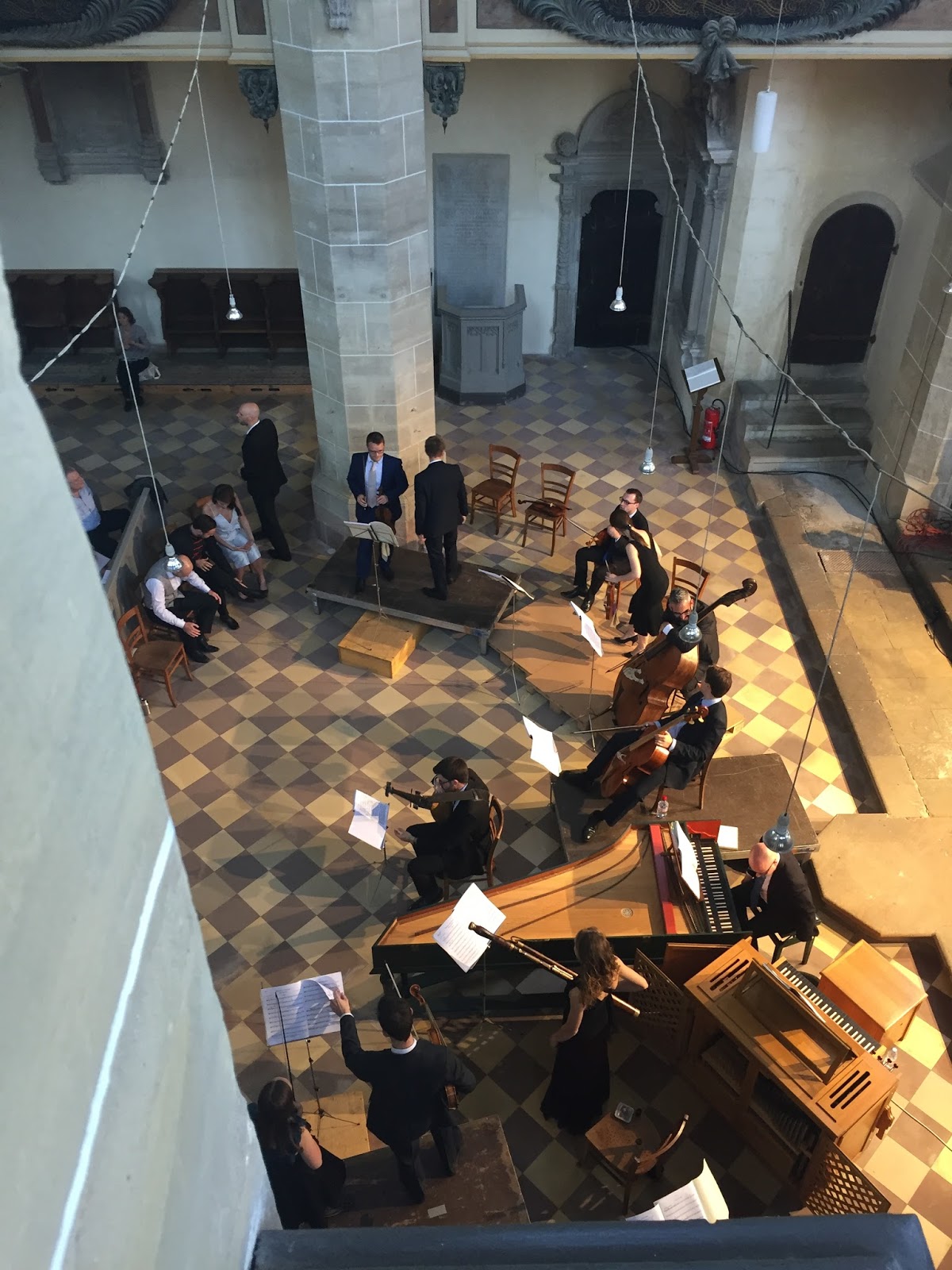 The first concert was in Halle, the birthplace of Handel. We enjoyed rehearsing in the Dom and discovering all that this wonderful place has to offer. I had visited twice before, firstly with FestspielOrchester Göttingen in 2014 and again last December to play the Christmas Oratorio. The performance of Handel's 'Messiah' was brilliant, I enjoyed listening from the gallery before playing "Glory to God" from the balcony. (We played from the stage for Parts 2 and 3). It was a real pleasure to perform in the Dom and the audience gave us a long-lasting standing ovation. 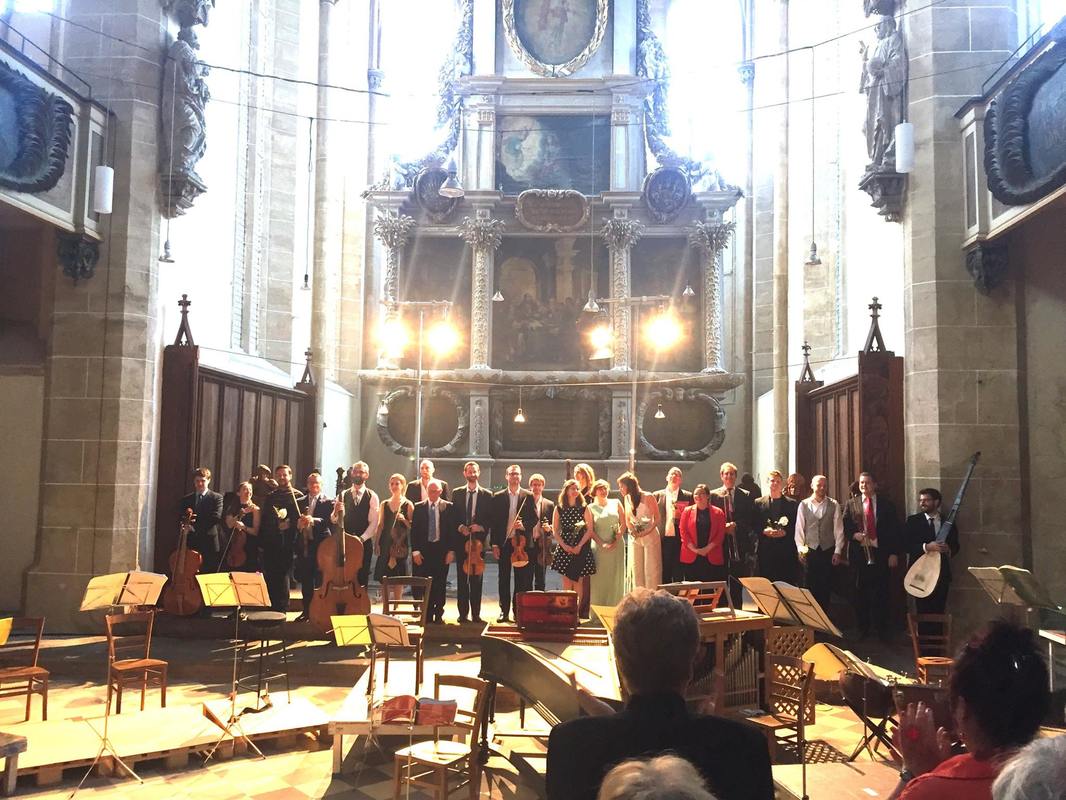 After the exciting performance, the group retired to the Hallesches Brauhaus on Große Nikolaistraße. Sadly, I couldn't stay for too long. The next day would be a travel day for Solomon's Knot but I unavoidably had to return to England for a different performance on the day in-between. I flew to Regensburg via Munich on the 4th of June to rejoin Solomon's Knot. Resultantly, I didn't get much chance to enjoy sightseeing in Regensburg - I didn't even get as far as seeing the Danube in Regensburg! All I did establish was that Regensburg would be an excellent place to revisit on an occasion when I have more time. It is a beautiful medieval city. I did manage to have a brief walk around the historic centre and I was awestruck by the scale and intricacy of Regensburg's Cathedral. 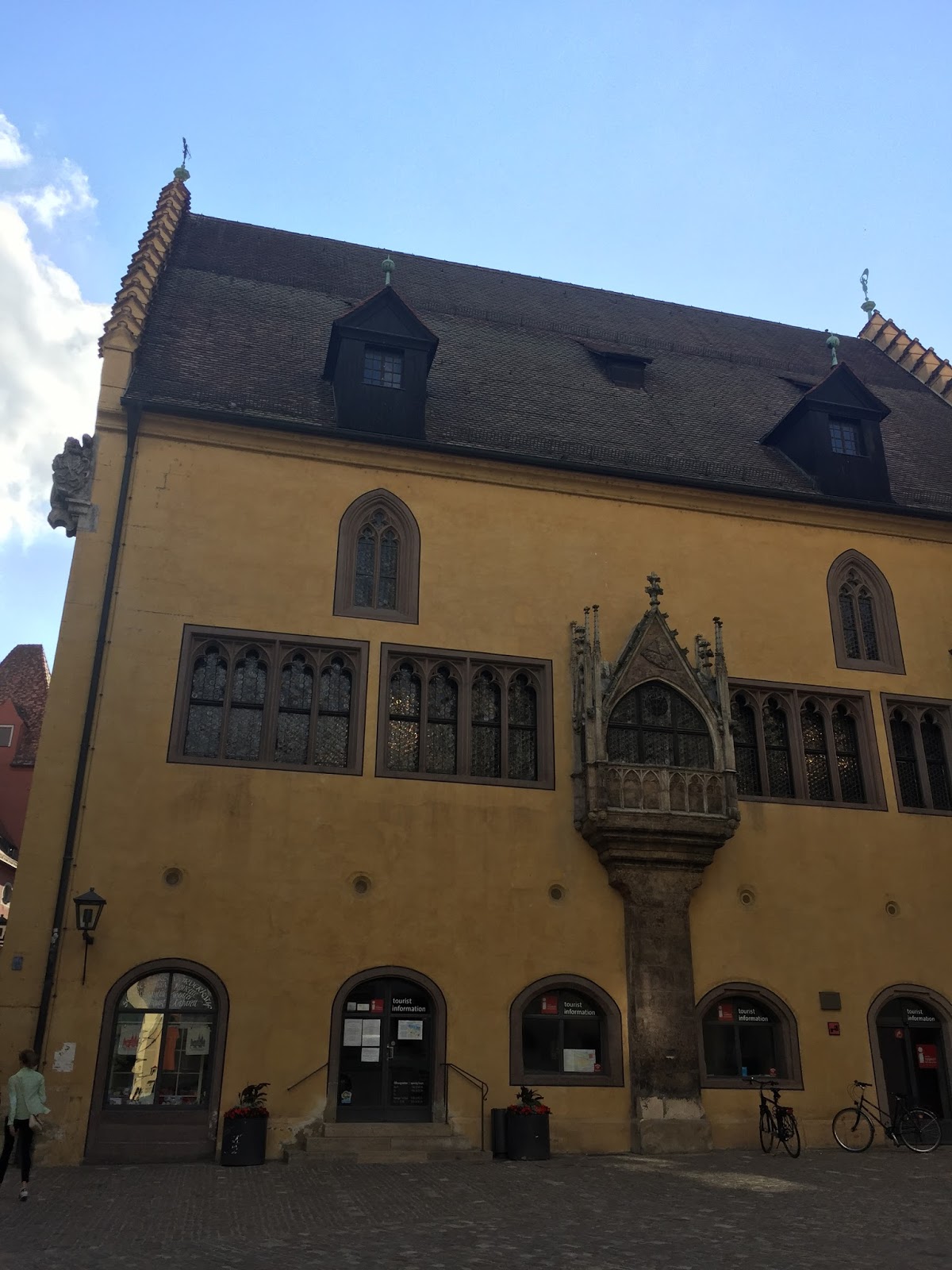 We rehearsed, and subsequently performed, in the 1631 Dreieinigkeitskirche (Holy Trinity church) which was also rather imposing and certainly recognisable in the Regensburg skyline. We rehearsed the Messiah quite methodically, curiously omitting the 'Hallelujah' chorus. It was suggested that we should play it at the end of the rehearsal. When we did, the idea came that we should swap instruments, for fun. 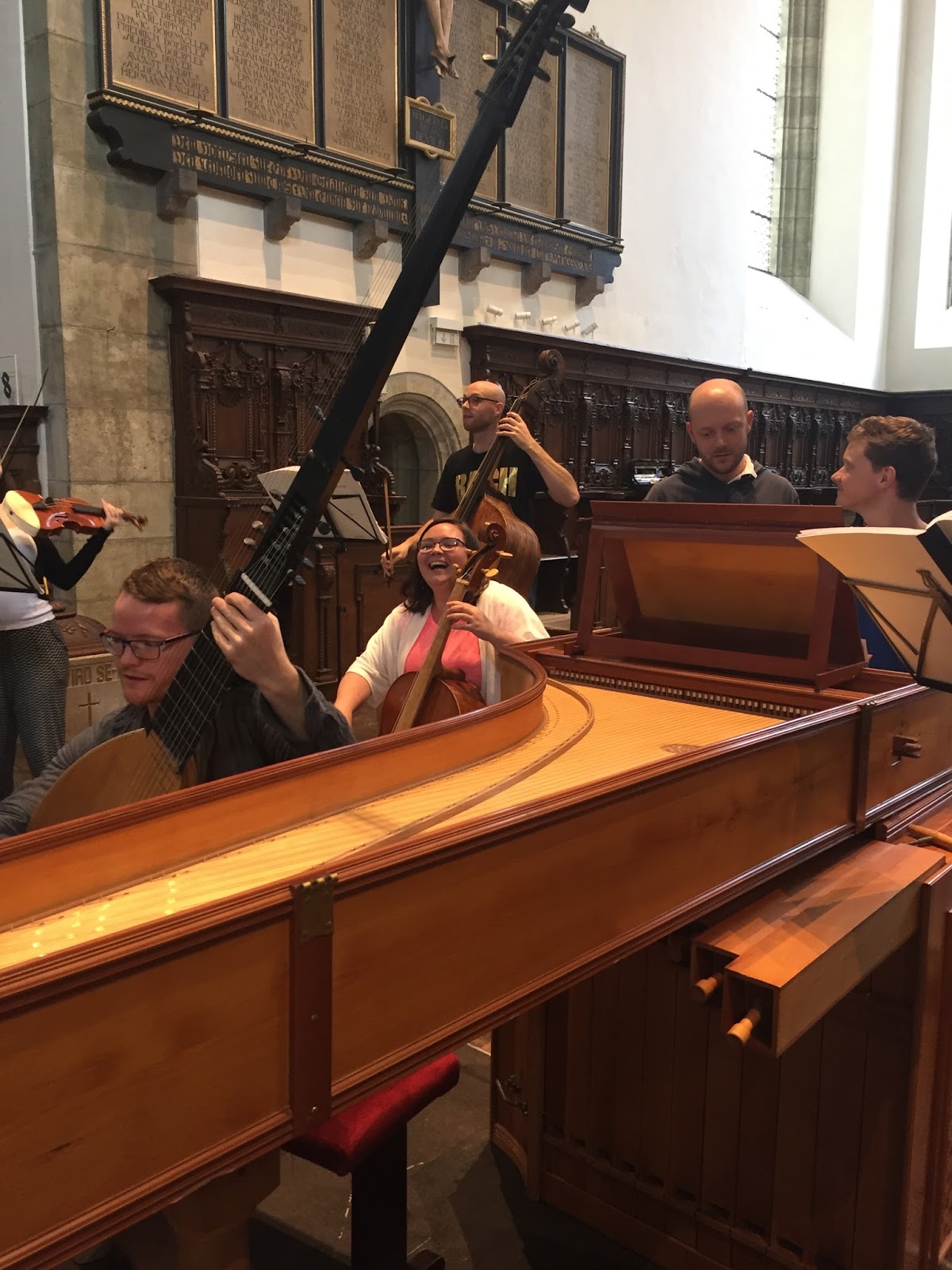 Amazingly, nearly everyone in the group has a second 'string to their bow' and the singers and instrumentalists of Solomon's Knot scrambled for the instrument or vocal part that they wanted or thought they might have an aptitude for. Several of the other players and singers in the group had played modern string instruments before (presumably they hadn't played on gut strings before). I made a beeline for the bass soloist who had mentioned that he played the trumpet when he was at school, so we swapped roles. It was great fun! The quote of the exercise came from James Toll, who is usually the lead violinist but on this occasion he was moonlighting on the theorbo. After we played and sang the whole chorus, James joyfully announced "I've found an A!". It was a very fun way to relax before the performance and it became a real talking-point within the ensemble.

The actual performance in Regensburg was remarkable. One reviewer referred to the "miracle of chance" that beams of warm evening sunlight should enter the Dreieinigkeitskirche during the bass aria 'the people that walked in darkness have seen a great light', which was sung by Jonny Sells, prompting headlines such as "Heaven opens over Regensburg"- Onetz.de. Another reviewer commented:
"It was almost eerie: just at the moment when British bass Jonathan Sells had arrived for his aria from Handel's 'Messiah', where the biblical prophecy promises "a great light", the evening sun fell through the church window so that the soloist was blinded by a celestial spot. A few bars later, at the "shadow of death" a black cloud slid in front of the beam, obscuring the singer. No professional lighting could have done better."
"Es war fast unheimlich: Genau in dem Augenblick, als der britische Bass Jonathan Sells in seiner Arie aus Händels "Messias" dort angekommen war, wo die biblische Weissagung ein "großes Licht" verheißt, fiel die Abendsonne so ins Kirchenfenster, dass der Mann wie von einem himmlischen Spot erfasst und geblendet wurde. Wenige Takte später, beim "Schatten des Todes", schob sich eine schwarze Wolke vor den Strahl und verdunkelte den Sänger. Kein professioneller Beleuchter hätte es besser machen können." - http://www.sueddeutsche.de
Performing 'The trumpet shall sound' without the safety net of having the music in front of me was a liberating experience, although initially a daunting one. I've played the aria more times than I can remember - certainly more than any other aria or piece. I know it. However, it is remarkably long (at around 9 minutes) and there are some phrases or ideas that return in slightly different guises, with dangerously similar ideas to earlier phrases in the aria. I had to really keep my mind on exactly which version was coming next to eliminate doubt. Add the Dal Segno into the mix (crucially, not a Da Capo), and the order of events is different on the repeat. Confusion could have arisen at any moment. Even when using the music I have, on the odd occasion - I have to admit, looked away from the page and managed to look back at a different place in the aria because it has some very similar-looking phrases - it is easily done.
During both performances, but especially the first performance in Halle, I felt apprehension dawn on me as the group finished Part 2 and re-tuned before Part 3. However, I sat back in my seat and listened to the soprano aria 'I know that my redeemer liveth' sung by Zoë Brookshaw. She sang purely and effortlessly, with such reassuring ease that I forgot all of my former apprehensions. She was staggeringly good and set an excellent precedent and trajectory for the remainder of the Part 3.
I really enjoyed performing 'off copy' and I put my trust in the ever-reliable players that I have known for years, particularly the leader James Toll. He was playing the first time I ever played the natural trumpet while we were both studying at the Royal Northern College of Music. That kind of trust takes years to build up and it is invaluable in such situations.
The Regensburg performance was also very well received and gained a standing ovation. The Mittelbayerische Zeitung declared it "a great benchmark performance". It seems that Solomon's Knot has (deservedly) gained an excellent reputation in Germany. It is a fantastic, close-knit group of singers and players to work with and it was a great project in two fantastic festivals.