Saturday, 7 Mar 2015, 23:00
On Saturday, I revisited the conservatoire where I studied for my undergraduate degree - the Royal Northern College of Music, in Manchester. This time I was there to perform in the newly-refurbished concert hall as the leader of a section of three natural trumpets (myself, Will Russell and Gareth Hoddinott). We played Bach’s Magnificat in D with Manchester Baroque.

With all three trumpet players travelling together, we had decided to leave London early in order to be able to stop off for lunch on the way. I suggested a gastro-pub in Macclesfield called Sutton Hall, which was a little bit off route but I assured the others that it would be worth leaving earlier for. It is about 25 miles outside of Manchester. I used to cycle there when I was a student at the RNCM. The food is sensational and both Will and Gareth loved it too. It is a real gem, and I was pleased to see it is as good as ever. The weather was also fantastic - and I can’t think of many better places to enjoy what is probably the first really good day of weather this year. Making this stop at Sutton Hall broke the drive up nicely and made it feel like a relaxed day out instead of a mad dash to Manchester and back.

We left Sutton Hall feeling suitably refreshed and continued the few remaining miles of the journey to the Royal Northern College of Music where we had a rehearsal. 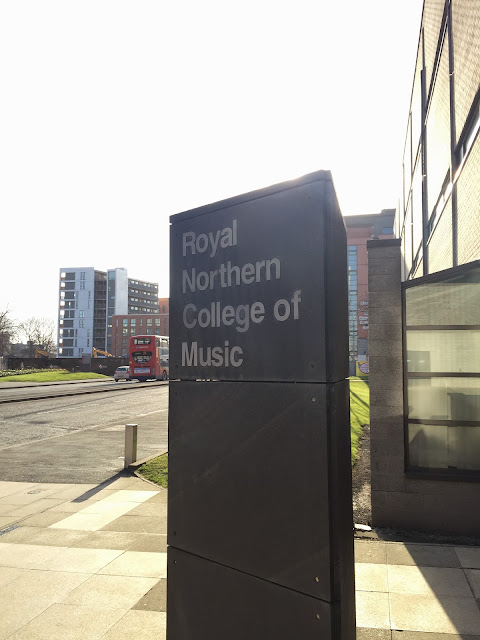 The Royal Northern College of Music’s concert hall has recently been improved. There is now a second tier inside, which is quite high up above the downstairs tiered seating. It has been done very intelligently, connecting all the original balconies with steel structures and steps up to the higher balconies. The acoustic of the hall is still just as I remember and just as good as ever. It is still an excellent hall to play in. Phew!

The visible improvements in the concert hall were good, but the newly-improved backstage area was absolutely excellent. The dressing room facilities are now fantastic, with enough room to accommodate a very large choir and a sizeable orchestra without any queuing or waiting. This was thanks, in part, to a stage manager who was excellent at performing her duties and who was a real pleasure to be dispatched onto stage by. She gave us everything we needed without us asking for it, she was very kind, polite and light-hearted with us. People like her can really make the difference between a good performance and a bad one.

I realised that the inclusion of the second tier in the concert hall has not just added more seating to the hall - I noticed a new social space / ICT suite at the top of one of the staircases leading into the hall as well. This space used to just be a high ceiling above the wide corridor next to the percussion studio. There was also some kind of sound and lighting studio at the back of the concert hall - something that was definitely missing in my day. I was really impressed by the improvements that the college has made to the facilities - and I was relieved to hear that the acoustic in the concert hall was just as good as I remember.

Manchester itself has also changed a lot. The BBC building has gone from Oxford Road. It is now temporarily a car park. What used to be ‘KRO bar’ is now a Tesco shop. Because the conductor rehearsed the choruses first in the rehearsal, we had quite a long time to explore Manchester. Will hadn’t been to Manchester since his audition at the Royal Northern College of Music (about 13 years ago), and Gareth had never been before. So I gave them a guided tour, along Oxford Road to the Bridgewater Hall - a quick photo on Trumpet Street, then along to the Beetham Tower, along Deansgate to the Cathedral and Chethams then back through the town centre to the town hall square and then finally back to the Royal Northern College of Music. 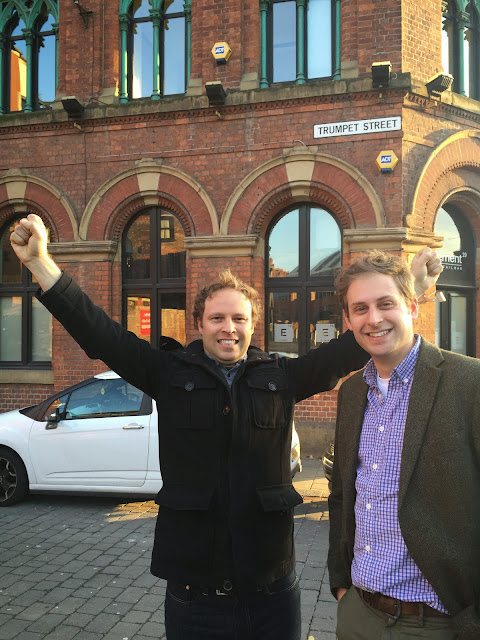 (L-R): Gareth Hoddinott and Will Russell on Trumpet Street in Manchester. Photograph taken by Russell Gilmour.
Being back at the Royal Northern College of Music brought back many memories for me. The last time I performed in the concert hall was in my final recital, about 5 years ago - and I reminisced about the various anecdotes and people I remembered from my time there. I am sure if it had been a weekday that I would have seen many more of them. I also remembered the good times I had studying at the RNCM. It really is a space that you can thrive in, there is always something going on. (For instance there was a luthier setting up a workshop on the concourse while we were there!) Compared to my studies at a conservatoire in London (which I also enjoyed) - it has so much more space inside the building. Additionally, when I studied at the Northern, the guest tutors who visited seemed to spend longer with us than they did during my studies in London. There is something about London that makes people rush around and there is something about Manchester that makes people (comparatively) more relaxed. I mean this in a positive way. When visiting teachers came to Manchester they usually stayed for a few days and gave classes spread over the time - whereas in London, they might give a class at the Guildhall, then rush off to the Academy for an afternoon class and then give another workshop at the RCM in the evening! Of course, I’m generalising - but that was how I remember it being. It was only when I left the RNCM that I realised this. I really enjoyed my time studying there and it was really great to be back. I also visited the noodle bar over the road that introduced me to loving all kinds of Asian food - it is called ‘Umami’ and it serves a fusion of dishes - Thai, Chinese, Japanese and others. It was definitely a hit with the other members of the orchestra as well.

The concert was good fun, and the audience were very enthusiastic. The trumpets got a good cheer during the applause when we were asked to stand by the conductor - which is always a nice feeling.