Since I first played with the FOG (five years ago, in 2014) I have tended to spend the interim months (with other distractions in the meantime, it must be said) eagerly anticipating the next festival! I wrote the following about the FOG after my first time playing with them:

“I have been amazed by the Festspiel Orchester Göttingen (known colloquially as FOG). The quality of the music-making has been incredible. I was impressed with the string section in particular, as the repertoire gave them a chance to show their unbelievable and unanimous dexterity. The brass, wind and continuo are also truly excellent and the orchestra really does contain a hand-picked selection of the best period instrument players in the world.” - Russell Gilmour, 'Göttingen International Handel Festival 2014'

That is still just as true now as it was in 2014. It is also heartening to be reassured that it is not just ourselves, the players, who have such an appreciation for the FOG. Jens Wortmann, a reviewer from Kulturbuero Göttingen, wrote this after our performance of Handel’s oratorio Saul [HWV 53] on Saturday 18th May 2019:

“…a high quality of the participants is a prerequisite. That was undoubtedly given. There is also something that can perhaps be called the Göttingen "Handel Spirit". It is embodied primarily by the Festspiel Orchester Göttingen (FOG) and the artistic director of the Festival Laurence Cummings. In this unique sounding body, a special spirit blows and sounds. For years, the conductor and orchestra have played together - the weeks in Göttingen are something very special for the musicians as well. And this spirit makes something of Handel's music: it sounds youthful and fresh, it pulsates - and it is contagious to everyone involved, both the other contributors and the listeners.” - Jens Wortmann, Kulturbuero Göttingen - 'Händel-Spirit in Hannoversch Münden', 2019

I’m so glad that the FOG’s joie de’vivre in performance is so starkly apparent to the audience. In that paragraph, Jens Wortmann has managed to capture the essence of FOG and this fantastic festival and the remainder of his article shows his astute attentiveness.

Jens Wortmann wasn't the only writer to review the performance. Sandra Bowdler wrote of a 'Magnificent Saul in Göttingen Handel Festival' for Bachtrack, awarding ★★★★★:

"From the start, Cummings and the FOG had the audience in the collective palm of their hands, beginning with a lively rendition of the opening Allegro. Every nuance of the symphony was exploited, and every instrument could be heard with limpid clarity. The opening ritornello of the first chorus, with the requisite three trombones, two trumpets and kettledrums, broke over the audience in an exuberant wave..." - Sandra Bowdler, Bachtrack - 'Magnificent Saul in Göttingen Handel Festival', 2019

"Many bouquets must go to the FOG, as a consummate team, including many highly talented soloists, too numerous to name all individually. To the rock solid continuo group comprising as ever Phoebe Carrai (cello), David Tayler (theorbo) and Haneke Proosdij should be added organist Martina Fiedler, and mention must also be made of the versatile Proosdij’s turn on the famous carillon. Margret Kröll enchanted on the harp."  - Sandra Bowdler, Bachtrack - 'Magnificent Saul in Göttingen Handel Festival', 2019

The Stadthalle in Göttingen would be the usual venue for the FOG oratorio performance but as it is currently being refurbished the decision was taken to relocate to the spacious St. Blasius-Kirche in Hannoversche Münden (Hann. Münden), 27km southwest of Göttingen and 17km northeast of Kassel. 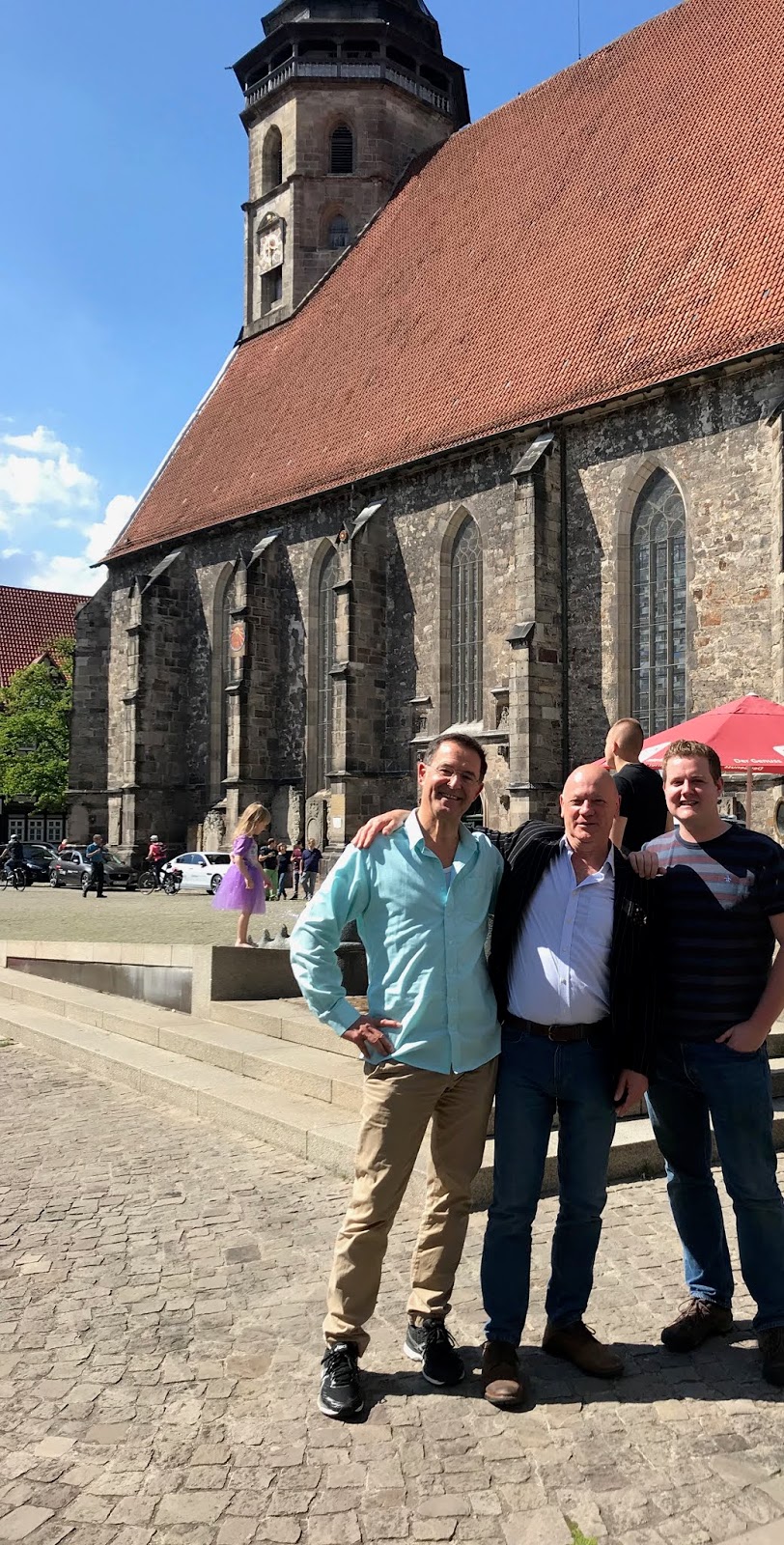 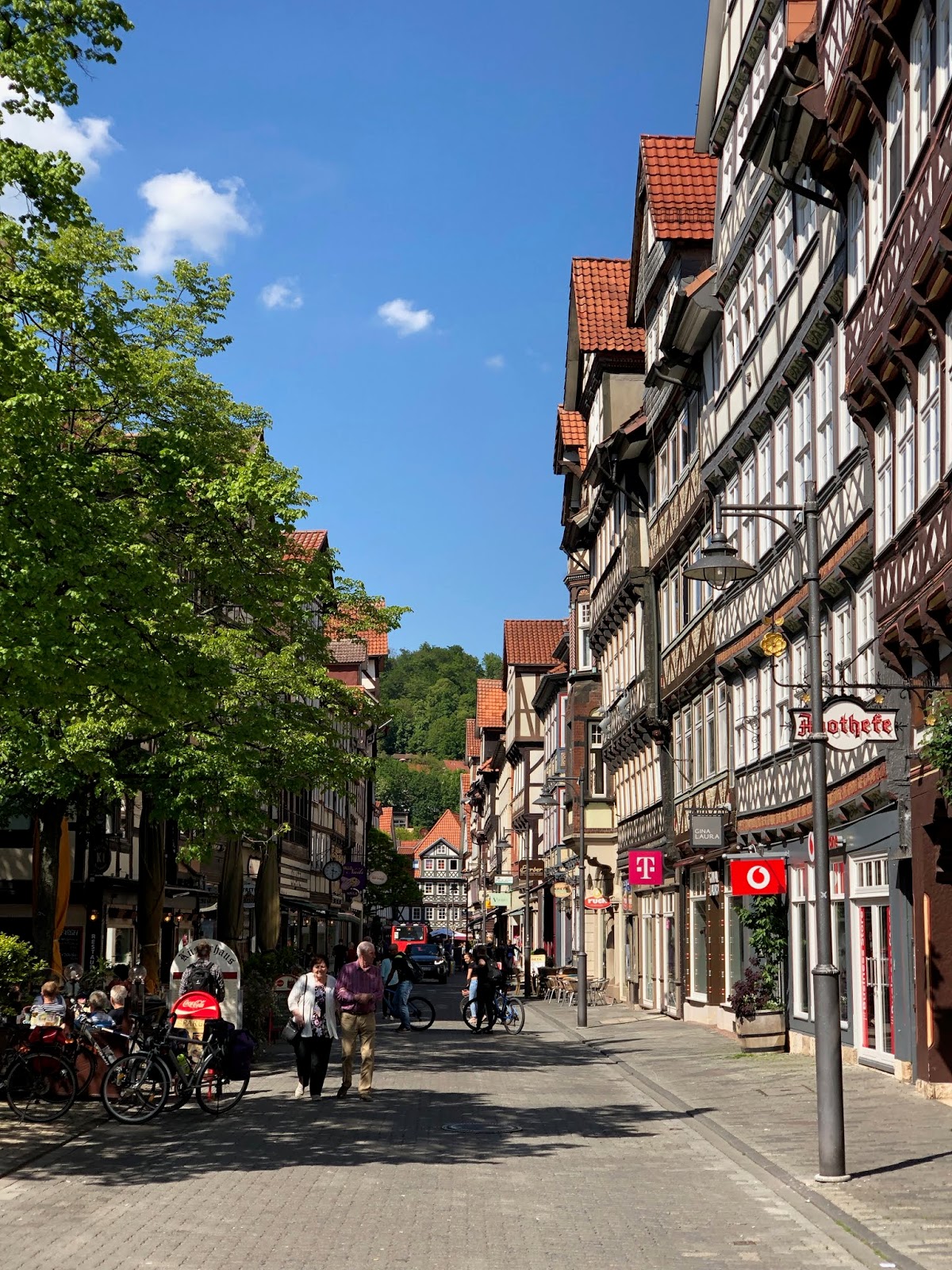 I had visited this historic half-timbered town in 2014 on one of our days off from the festival and it was great to return to perform here. The town is bordered by the Fulda and Werra rivers, which merge to become the Weser at the confluence - indeed Münden means confluence in old German. Around 700 half-timbered medieval houses survive, in excellent condition - many are over 6 centuries old. Hann.Münden is a picturesque place amid rolling countryside, flowing rivers, roofed bridges and with attractive, historical charm. 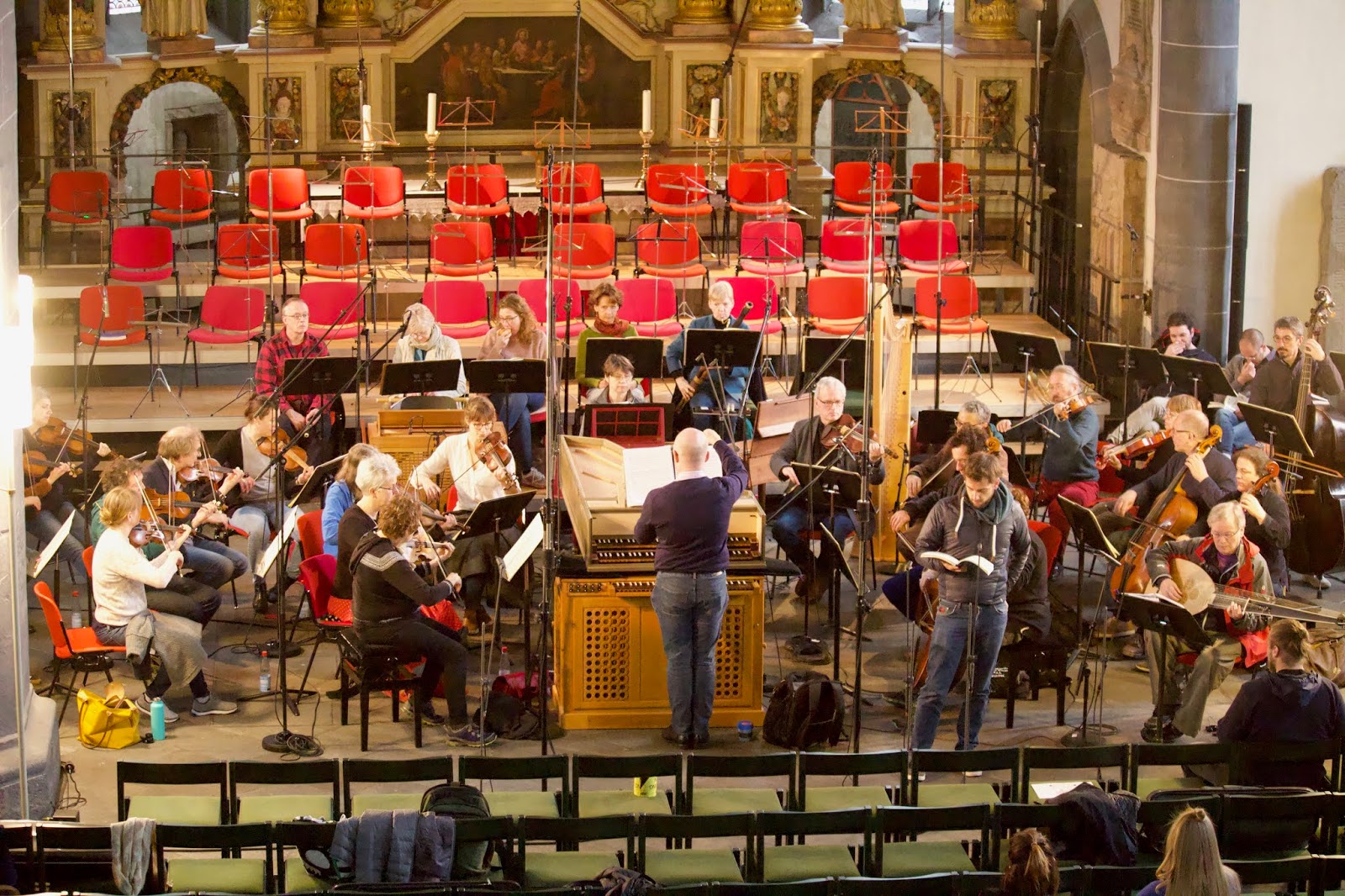 Handel’s Saul (of 1738) was a great choice for the oratorio performance this year. The work is for an extended baroque orchestra and it is a cornucopia (although, ironically without horns) of interesting music. When listening to the complete work, you get the impression that Handel is going all-out to use every colour and shade from his palate. Indeed, on closer inspection (having read Ruth Smith’s excellent programme notes) I learned that:

“In Saul, more than any of his other oratorios and at no small expense, he magnificently used the instruments of this orchestra to evoke both biblical antiquity and modern patriotic resonances.” - Ruth Smith - 'Setting the Bible to Music' - Programme Notes, Saul, 2019

“The events of Saul are those of a remote past, and Handel’s instrumentation serves to conjure up that archaic world.” - Ruth Smith - 'Setting the Bible to Music' - Programme Notes, Saul, 2019 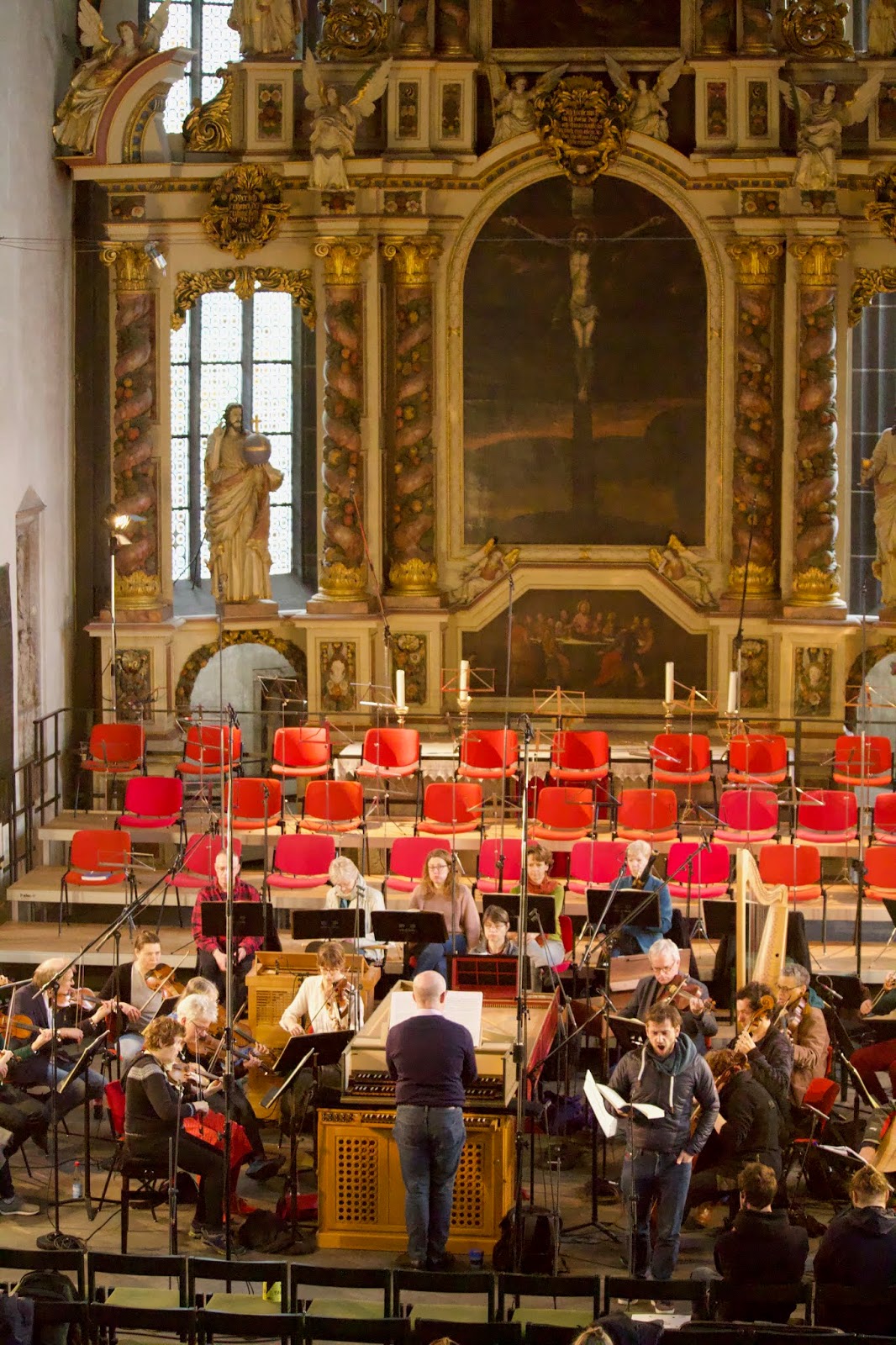 Saul is replete with:

FestspielOrchester Göttingen Trumpanibones - Saul 2019
A post shared by Russell Gilmour (@trumpetruss) on May 18, 2019 at 1:13pm PDT

“Mr. Handel’s head is more full of Maggots [obsessions] than ever. I found yesterday in his room a very queer Instrument which he calls Carillon (Anglice a Bell,) and says some call it a Tubalcain, I suppose it is both in the make and tone like a set of Hammers striking upon Anvils. ’Tis play’d upon with Keys like a Harpsichord, and with this Cyclopean Instrument he designs to make poor Saul stark mad." - Charles Jennens, 19th September 1738

"But Laurence Cummings and the FOG dealt with this famous phrase as consistently as with the rest of the oratorio: every bar of Handel's music came to life, the drama of the material was made to ring. At the funeral march the trombones deserve special praise, as Adam Woolf, Victor Belmonte Albert and Fabio de Cataldo produced sounds that got under the skin." - Jens Wortmann, 'Händel-Spirit in Hannoversch Münden' Kulturbuero Göttingen, 2019

The string section, led by Elizabeth Blumenstock and the continuo players are (in my opinion) the crowning glory of this orchestra. They have a huge workload throughout the festival and still they manage to play everything with seemingly-effortless ease and with a glorious group sound. Some of the most magical moments of the FOG performances have come when the string principals (Elizabeth Blumenstock, Lisa Weiss, Klaus Bundies and Phoebe Carrai) momentarily play soli - for just a few bars they are a quartet - before the tutti players rejoin them. It’s an amazing effect. I am also constantly transfixed by the playing of the FOG double bassists: Paolo Zuccheri and Mauro Zavagno. 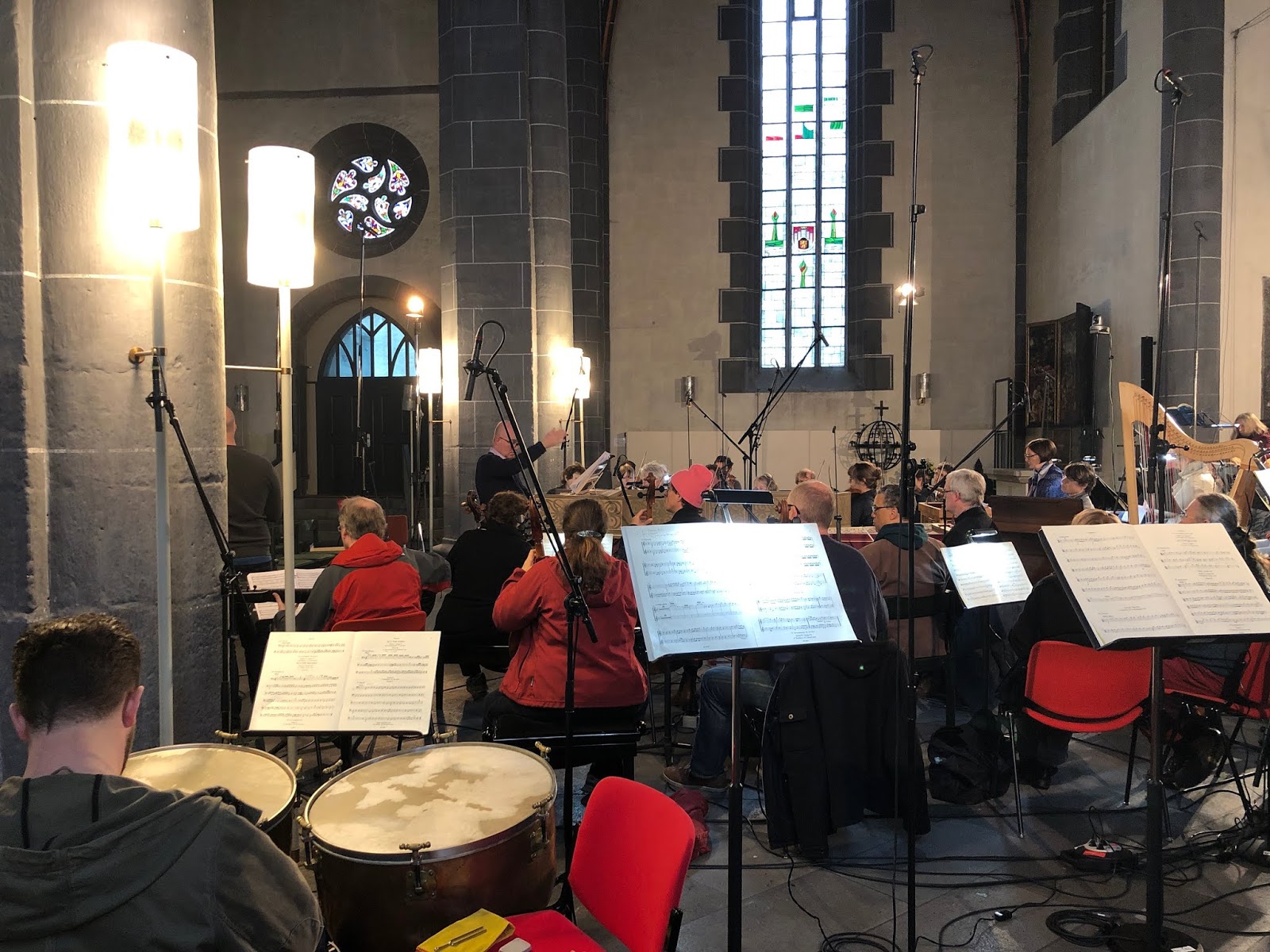 As well as excellent instrumentalists, we were fortunate to be in the company of amazing singers. The NDR chor (under their chorus master Edzard Burchards) were on top form, and four of their singers stepped forward from the choir ranks to sing the parts of: Abner (Keunhyung Lee, tenor), Doeg (Christoph Liebold, bass), Apparition of Samuel (Fabian Kuhnen, bass) and Amalekite (Joachim Duske, tenor). All of the soloists were incredible. We had Markus Brück (baritone) as Saul, Benjamin Hulett (tenor) as Jonathan, Eric Jurenas (countertenor) as David, Raphael Höhn (tenor) as High Preist, Witch of Endor and, remarkably, actual sisters Mary Bevan (soprano) and Sophie Bevan (soprano) singing as Saul’s daughters (Michal and Merab, respectively).

I had only played Saul once before, about 8 years ago. This performance turned it from a work that I could hardly remember into one that I could now hardly forget.

The music is just one reason why the festival is so brilliant. As well as the music, it is the people, the festival atmosphere and the place that make it such a thrill to be there. We enjoyed great parties with great friends of the FOG like Anton Säckl, or Astrid and Stefan Lipski, and we also attended a fabulous opening night party at the beautiful Altes Rathaus, by the iconic statue of the Gänseliesel. The members of staff at the Parkhotel Roepeter know us all by name and it really makes us feel at home. The kitchen at the far end of the garden that they allow us to use is the social hub of the orchestra at the hotel and we chat, cook, eat, drink, laugh (a lot!), relax and occasionally play folk music in there.

Spot the difference! Thanks for the loan @annajane417 and thanks for the photo @fabiodeka
A post shared by Russell Gilmour (@trumpetruss) on May 20, 2019 at 1:40am PDT

As I left Hann.Münden I was given a copy of last year's oratorio recording - Judas Maccabaeus which is now available on the Accent label. When I got home I also listened back to Saul on the NDR website (Part 1 and Part 2) and I think they have brilliantly-captured the performance. Enjoying these two recordings is helping me to avoid the all-too-real prospect of getting the post-tour blues!

View this post on Instagram
Today’s listening! Home after a great year at the Göttingen Händel Festival!
A post shared by Russell Gilmour (@trumpetruss) on May 20, 2019 at 2:28am PDT