Monday, 23 Jun 2014, 10:44
20th - 22nd June saw another visit to the charming city of Wrocław in Poland. I was joined by Matthew Manchester, as he happened to be back in Britain from Australia at the perfect time to be able to fit this little tour into his schedule. It was great to be able to play with him again, as the last time was in Australia doing a tour of Monteverdi's L'Orfeo in 2012.
We played two concerts in Poland with the Wrocław Baroque Orchestra under the direction of Andrzej Kosendiak. The programme for us consisted of Mozart's C Minor Mass (K.427). It is simply stunning music. The first concert was in a fairly run-down town on the outskirts of Wrocław, called Jelcz Laskowice. It had once been a town dominated by the coach manufacturing and repair business. Seemingly the coach business has struggled, some of it seems to have closed, and that has had a palpable effect on the whole town. We played in an imposing, yet unfinished church in a brutalist architectural style. The perimeter walls of the church were incomplete and the outside rendering of the main building had not been finished either. Cement mixers were still in situ, though a combination of cobwebs and rust indicated their lack of recent use. Old piles of cement, sand and rubble surrounded the area. It was almost as if workers had just downed tools and left. The whole exterior of the church and the surrounding outbuildings had the eerie sense of a film set in some sort of disaster film. The church exterior gave the very real impression that it had been abandoned mid-construction. 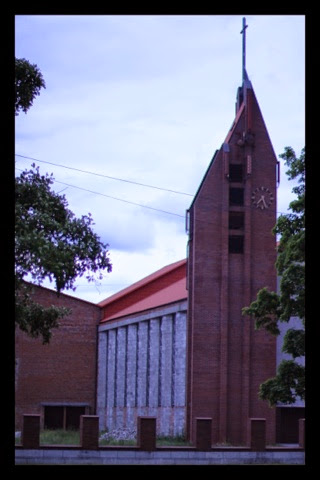 We were taken to our changing room, which was a run-down shack just next to the church. Once the main room had been filled with members of the choir, there was little room for the orchestra in there. Some people filed back into the church to find the vestry, though a few of us spilled into the next room in the shack. This room felt like a garage and it contained agricultural equipment, dusty benches, a very curious stench and very little light apart from what leaked through the gaps between the walls and roof. After walking clumsily around for a few moments in the near-dark we decided to keep our things with us, as we needed most of it for the rehearsal anyway and we didn't want to get our concert clothes dusty. The boarded-up exterior of the shack provided quite an interesting texture for the background of portraits. 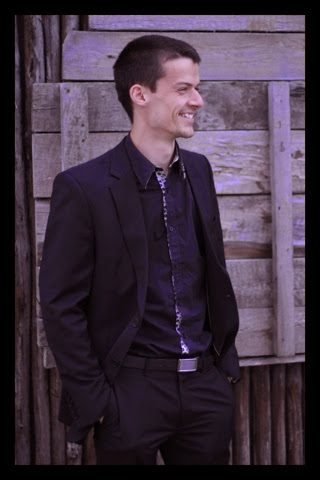 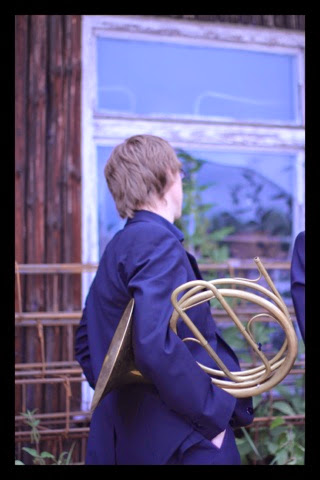 We entered the Maksymilian Kolbe Church, which was comparatively exquisite inside. We sat down in our seats and began rehearsing in this huge, boomy acoustic. The several tacet movements for the trumpets gave me plenty of time for my eyes to wander around the room. Bold orange, red and yellow stained glass ripples rose from the bottom of the windows upwards in the frame and these were all along the church. Everything was very clean and it seemed to be well-finished inside. At the back of the church there was a formidable organ, which looked brand new. The colourful stained glass ripples below it led my eyes to the huge 'feature' stained glass window in one of the semitransepts of the church, on the opposite side to the trumpets (we were sitting to the right of the conductor, behind the 2nd violins). First of all I saw a blue and white striped pattern in the window. Then I realised they were a pyjama-like piece of clothing on a person. Then I saw some barbed wire fencing. Then smoking chimneys in the distance. It made me realise what the brightly coloured ripples may symbolise. I noticed that Matt had simultaneously been looking around the room and I think he had also felt a cold shiver down his spine at this realisation.

I discovered later that Maksymilian Kolbe, after whom the church is named, had volunteered to die at the Auschwitz Concentration camp in order to save the life of a stranger. He died there on 14th August 1941 and became a Saint in 1982, being canonised by the Polish Pope John Paul II. A subcamp of the Gross-Rosen concentration camp was only 4 kilometres away from Jelcz Laskowice, in a place called Miłoszyce, where labourers were forced to build 6" Howitzers between 1943 and 1945.
After the rehearsal there was a long wait before the concert. There was a church service taking place before our concert, so clergymen and alter boys assembled in the vestry, donning cassocks and lighting candles. A few of the alter boys were playing outside in the rubble, cassocks and all, before the church service took place. It was also quite windy, which added to the bleakness of the place. 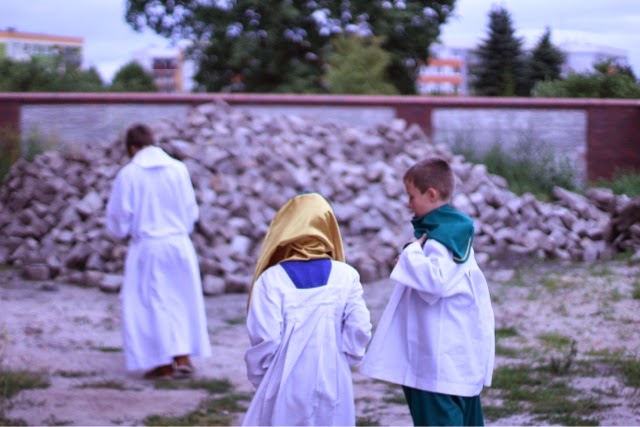 We had some time to explore the town during the church service. We had a short walk down the high street. Everything was closed, some places seemed permanently closed. Only one corner shop was open. We walked past monotonous blocks of flats, all made from the same blueprints, it would seem. Someone in the choir had managed to get 3G Internet service tethered to a laptop, enabling those interested to watch the World Cup match in the shack. 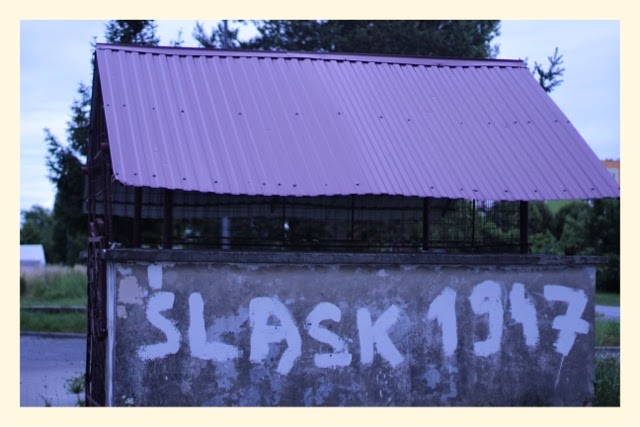 'Silesia 1947'
The concert took place after the church service. It was a difficult task staying together as sounds were bouncing around all over the place. The presence of the audience had helped to absorb some of the sound, so it was easier to stay together than it had been in the rehearsal. The concert was quite moving and the audience gave a unanimous standing ovation, standing almost at the same time that the orchestra did. 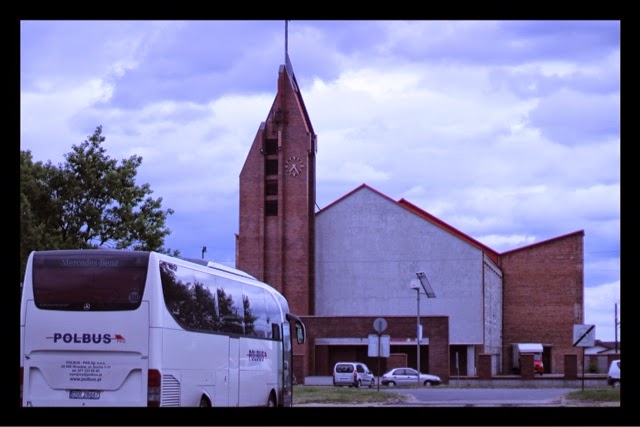 Afterwards, we changed and packed our things away and got back on the orchestra bus. As I left the church, a lady spoke to me. She was very animated, giving hand gestures pointing to her heart, her eyes (she looked as if she had been crying) and her forehead, where her hand gestures changed to making expansive shapes above her head. I understood very little of the Polish she spoke, but I replied saying mostly 'dziekuje' (thank you), and 'dziekuje bardzo' (thank you very much), which only seemed to add fuel to her notion that I was a Polish speaker. The few words I did understand and her general body language indicated to me that she really liked the performance, which had inspired her mind and seemed to have really moved her. I'm pretty sure that is the gist of she meant anyway.
As musicians, we tend to be invited to quite touristic places and we often get to enjoy the most privileged and fortunate celebration of culture, in many ways. I was amazed by the difference that just 30km can make. I was glad that we were able to take the orchestra there.
We returned to Wrocław, a short journey but a dramatic change.
The next day, Sunday, we were informed that there would be no rehearsal and that we should meet directly before the concert at Wrocław Cathedral. The cathedral is an impressive structure, with two imposing towers and it is very highly decorated outside, with historic monuments all around inside. The concert was absolutely packed, people were sitting and standing wherever there was space. I have never seen such a densely packed audience for an orchestral concert. 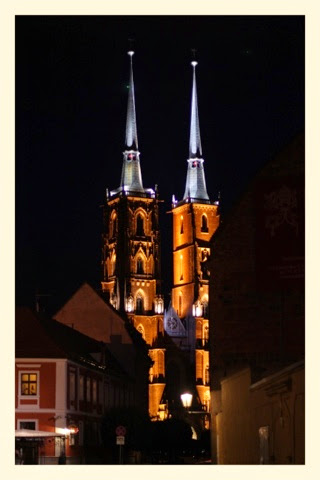 After the concert we attempted to visit 'Spiz', the local brewery situated beneath the town hall. Sadly, they weren't serving food that late on a Sunday night and they had just called last orders for drinks too. I tentatively suggested going to a communist style bar, which I had been introduced to on a former visit by a Scottish student I randomly met who studied in Wrocław. I wasn't sure if it would be to everyone's satisfaction, but it proved to be a huge hit. There were 11 of us, two trumpets, three trombones, four horns (the other two played in the G Minor Symphony (K.183), requiring 4 horns), one oboist and one bassoonist. All drinks were 4zł (approximately £0.80) and all food was 8zł. The bar seemed to tick all the essential boxes and we celebrated Pierre Antoine's birthday there.
It was a sensational short visit to Wrocław, and the orchestra is on good form. We even had time to take in the Panoramic painting of the Battle of Racławicka as well as some of the highlights from the Wrocław Museum. I was impressed by a Caravaggio painting depicting the Polish leader, Ossolenski. I remembered the name of one of our rehearsal venues as the Ossolenium, and asked a guide in broken Polish (and by gesturing) if it was the same man that the Ossolenium is named after. He said it was. I was particularly inspired by a video in the touring Japanese exhibition at the museum. It showed the whole process of three Japanese craftsmen making a samurai sword. We sat on bean bags and watched the whole thing. It was fascinating, as it combined a number of familiar processes I recognised from how trumpets are made, and the making of the case for the sword is very similar to how Cornetts are made. Both Matt and I were transfixed by this video as it not only showed the zen reverence of the makers being filmed but it was also filmed in a suitably zen way. I asked a museum attendant where I might be able to obtain a copy from, but it was not available to purchase. The only copy is the one in the travelling exhibition that we were watching. It is well worth a visit. 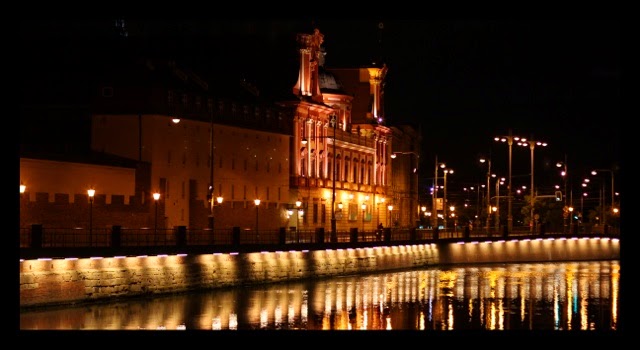