We arrived in Vientiane at Wattay International Airport on the evening of Friday 26th October 2018. The Lao Plaza hotel was only 6km away and we checked in very efficiently upon arrival. After dropping off our luggage we left the hotel and went to find something to eat. The hotel was near Nam Phou, a square with a central fountain and peripheral bars and restaurants. We entered a nearby bar, sat outside and ate a simple but tasty dish of pork and egg fried rice. It was noticeably much quieter here than it had been in Bangkok, but to be honest I felt that most places would seem quiet after Bangkok. I learned that around 80% of Laos’ 6.9 million inhabitants live rurally, with around 820,000 living in the capital city of Vientiane.

After breakfast the next morning we ventured out on a short walk. It seemed much hotter in Vientiane than it had done in Bangkok for some reason. Perhaps it felt warmer here because it was the only landlocked country we visited on the whole tour. We walked south from the hotel and had our first encounter with the Mekong River. We would see this river, the world’s twelfth longest, again on this tour in Phnom Penh, and we saw the Mekong Delta while flying into Ho Chi Minh City. 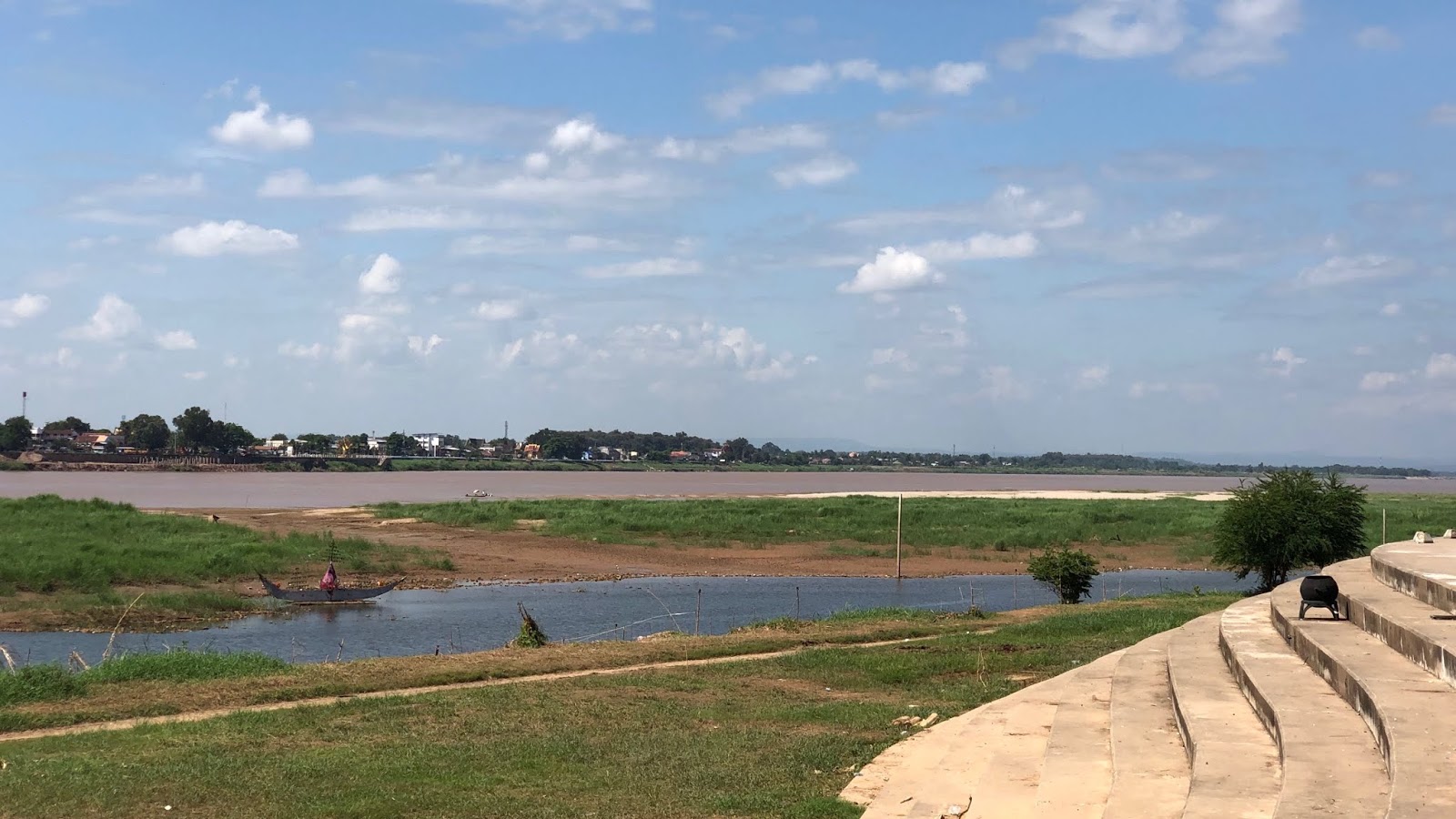 The river flows from its source on the Tibetan Plateau through much more of China, where it meets a tripoint between China, Myanmar and Laos. The Mekong is the border between most of Myanmar and Laos and it eventually meets another tripoint of Myanmar, Laos and Thailand before becoming the border between much of Laos and Thailand. Eventually it reaches Cambodia where it is joined by a tributary system (Tonlé Sap) before it discharges into the South China Sea to the south of Ho Chi Minh City. 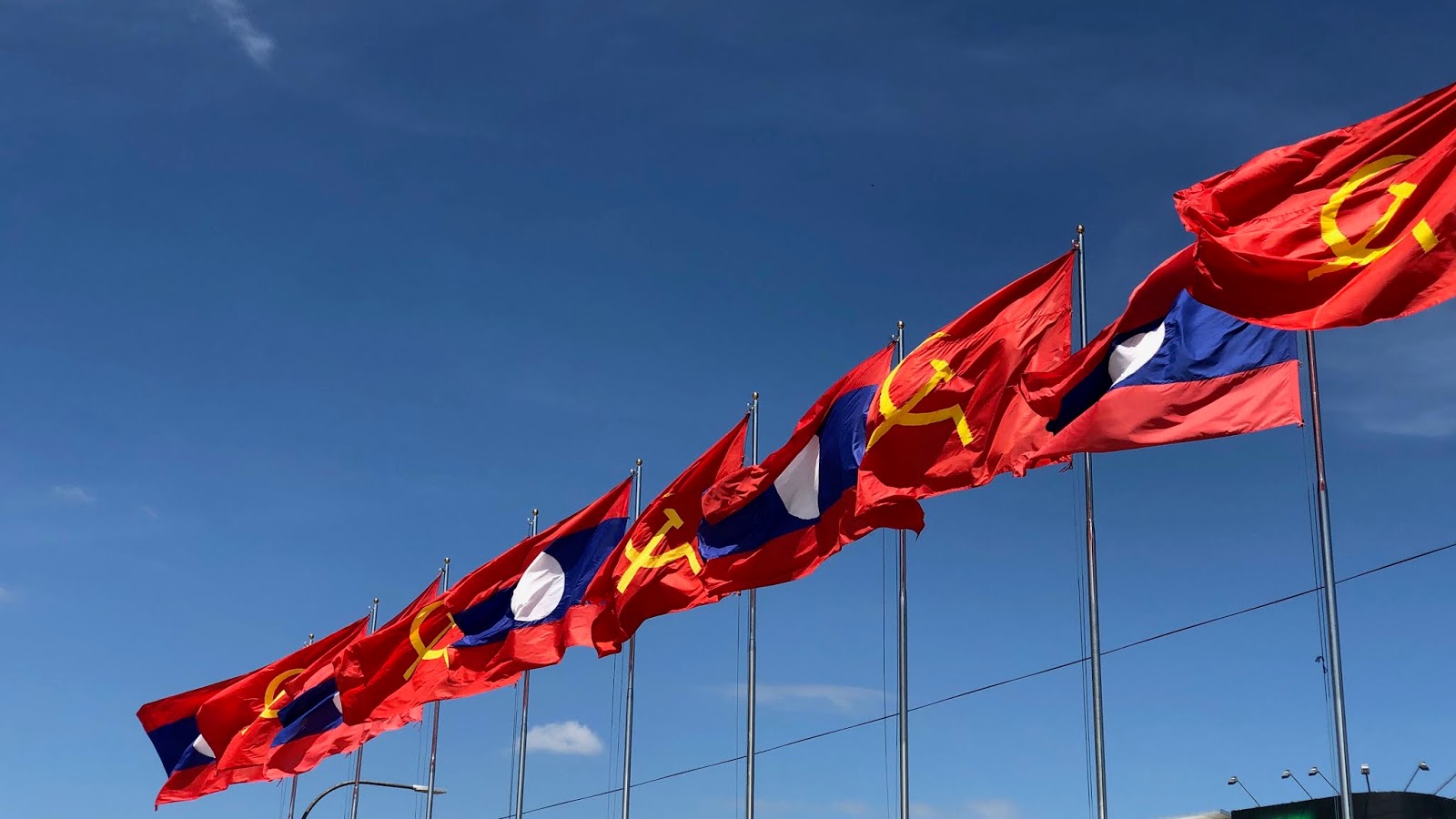 As we walked downstream along the Mekong I noticed there was a lot of space between the river and the bank; I guess it must flood in the wet season. I noticed there were no bridges in the centre of Vientiane; the nearest, the First Thai-Lao Friendship Bridge, is 20km away. It was amazing to be able to see Thailand on the opposite bank of the river. Alternate flags, all with a red background, flanked the Laotian side of the river. Half of them had a horizontal blue stripe with a central white circle (the Laos flag), and the other half had a yellow hammer and sickle (the communist flag). A group of people, dressed in navy blue shirts, stood in the distance (on the Laos side) by the river’s edge. They threw flowers into the river in some form of ceremony, accompanied by traditional music played on a Khaen with punctuating and rhythmic sounds of metallic percussion. I could hear the instruments quite clearly but I could not see them from this distance. We walked for a short while, passing a closed riverside market, and we ventured back to the hotel, turning inland at the Royal Statue of Chao Anouvong. This large bronze statue of a revered King (1805 - 1828) with his right arm outstretched was built in 2010. 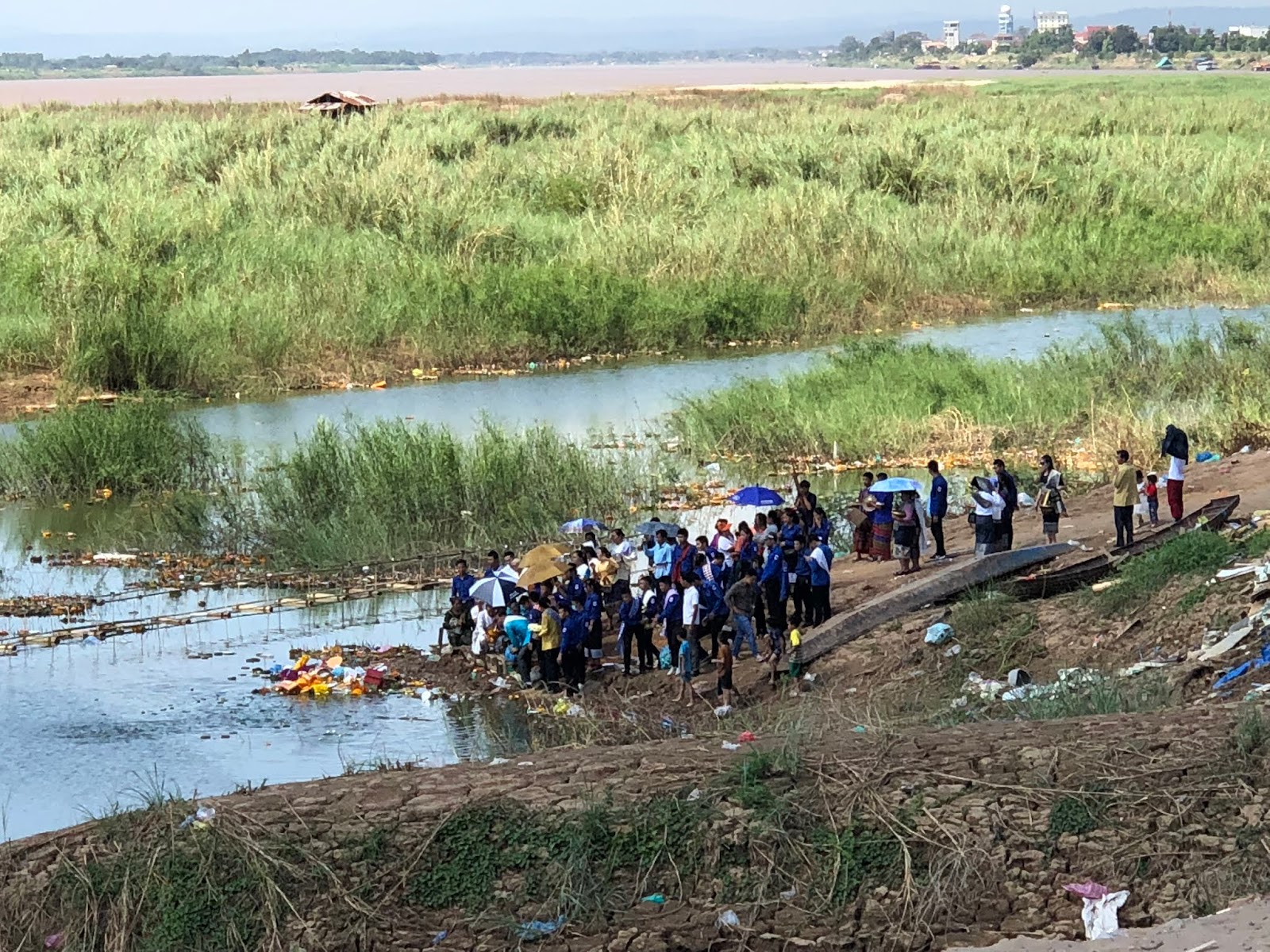 Bangkok had made us familiar with the sight of temples and there were many magnificent wats and temples here too. On the walk back to the hotel we crossed Ave Lane Xang, a wide street with the Presidential Palace at one end and the Patuxay Monument at the other. We continued past several distinctly French colonial-style houses along the way and had a brief look at That Dam, an ancient bell-shaped stupa. Although we were under 400 metres away from the hotel we had to take shelter from the sun in an open-sided café and we had an iced drink. 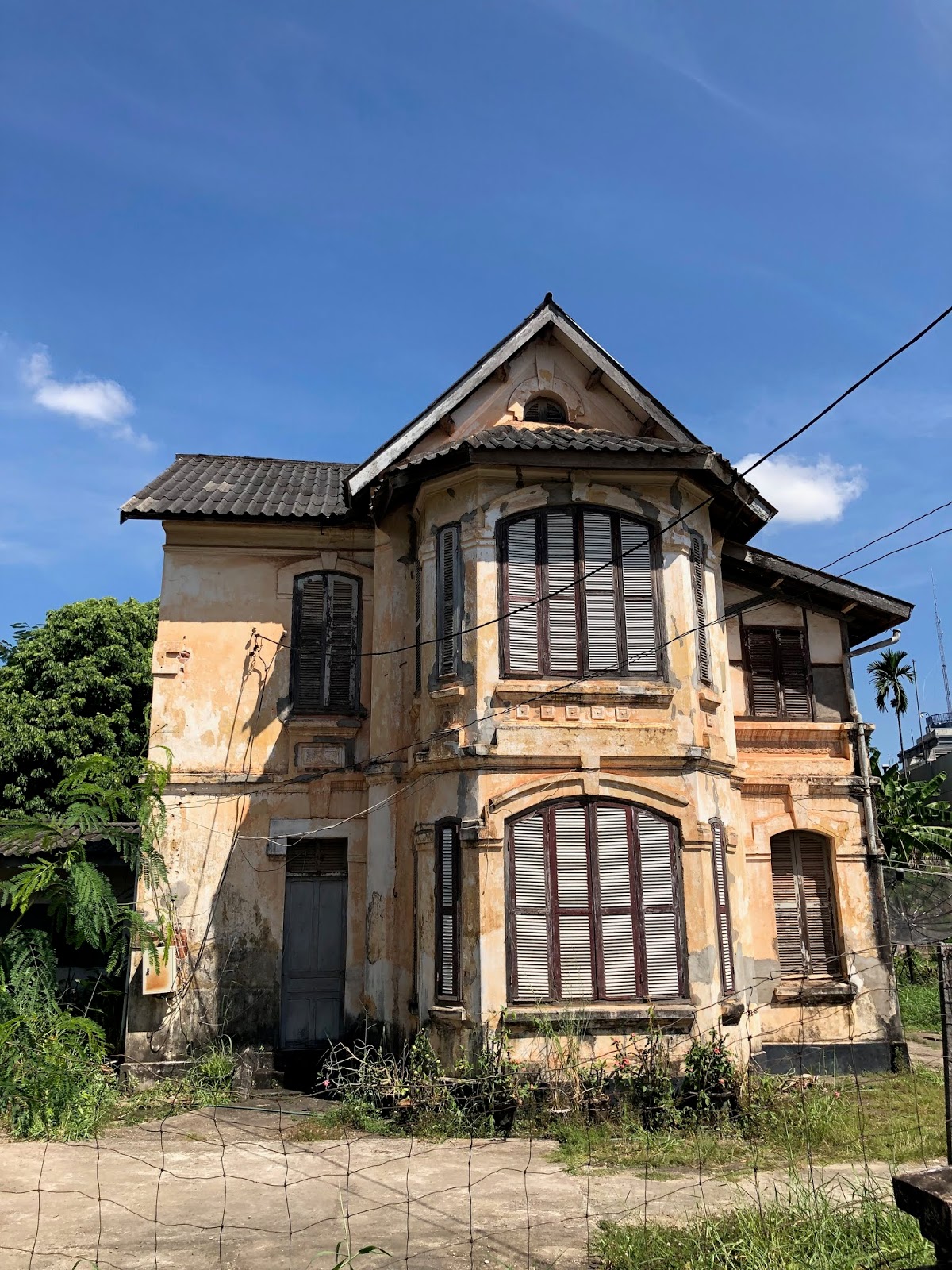 That evening the Orchestra of the Age of Enlightenment had been invited to a formal welcoming party at the hotel. We were treated to, and we were all absolutely transfixed by, a series of dances performed by five Laotian dancers in brightly-coloured traditional dress. A series of eloquent speeches followed, firstly from Toyota’s representatives and then a vote of thanks was given by our musical director Steven Devine before we enjoyed a fantastic buffet dinner. I enjoyed interacting with the Toyota representatives and they introduced me to the wonderful and fantastically-spicy Laotian Beef Salad. This amazing buffet also featured a noodle station with a tasty, clear broth and a special kind of Laotian noodle on offer, with many options to add: lime, scallions (spring onions), chilli, mint, beansprouts, lemongrass, shredded lettuce, cabbage, thai basil, coriander, sawtooth and more besides. The noodles were (I think - and I could be wrong) called ‘khao poon’, a particular type of fermented rice vermicelli. They were fantastic and we kept going back for more bowls! It was a great welcome party.

As a lover of phở noodle soup I was delighted to learn that there were several phở places in Vientiane. Phở Zap came highly recommended by our new friends, the Toyota representatives. They recommended this restaurant on Khun Bu Lom Road (Branch: Hatsadee) and it was just a five minute walk from the hotel. We had enjoyed a leisurely breakfast and a morning at the swimming pool and so we were ready to eat by about 3pm. We walked over to Phở Zap and were served, without the need for prompting, with a bowl of beef phở with a plateful of accoutrements to add to it. The broth was refined and clear; the deep bowl contained densely-packed chicken meatballs, delicately-sliced beef brisket and wide but thin noodles. Any time later than 3pm would have been too late get a phở here, they were clearing up and packing away while we ate. It was, as promised, absolutely amazing and it only cost ₭50000 Lao Kip (LAK), about £4.50 GBP. As we left, Kinga (violin) taught me to say khob chai lai lai (ຂອບ​ໃຈ​ຫລາຍໆ) - meaning many, many thanks. I loved saying this at any available opportunity. 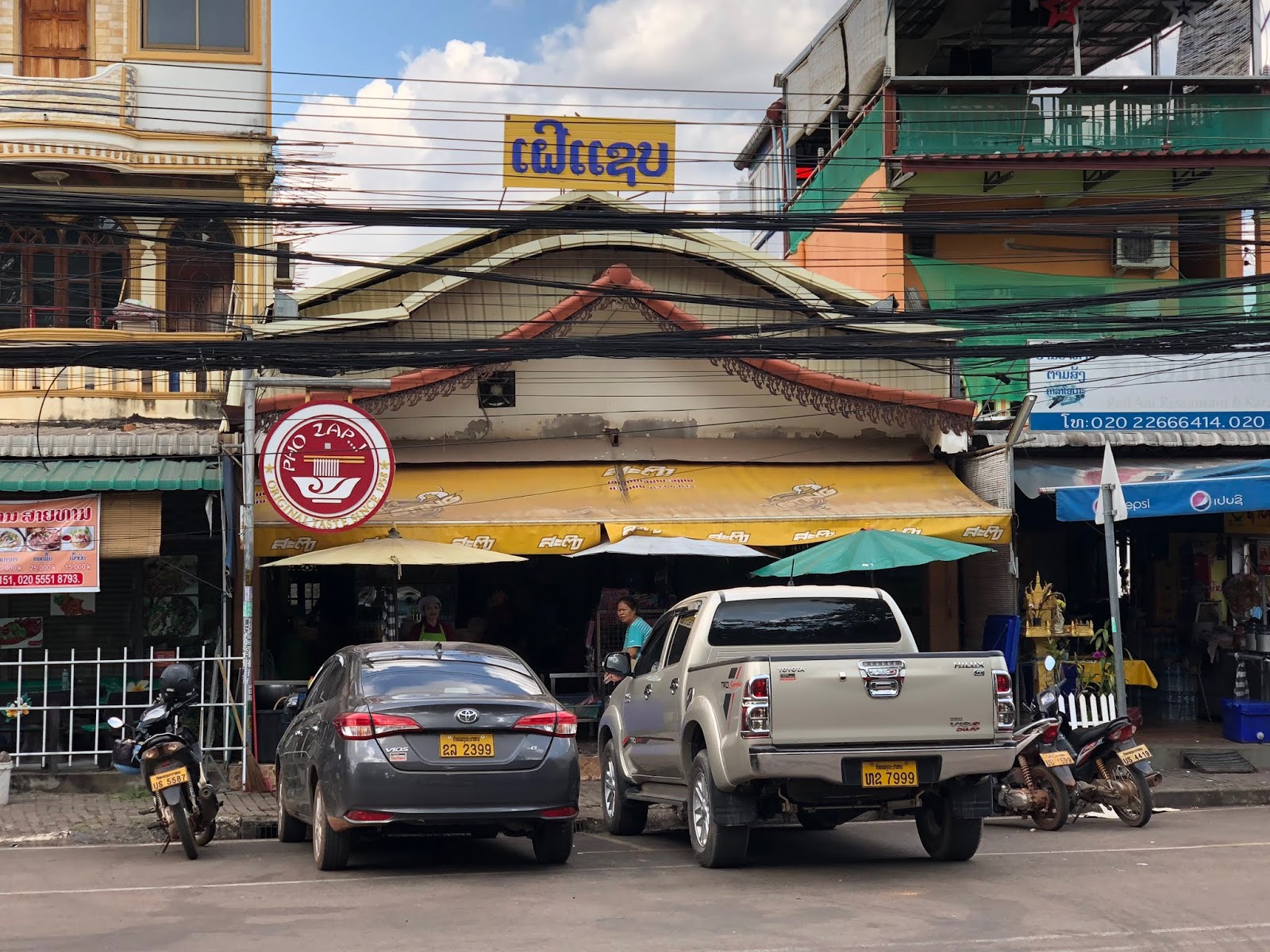 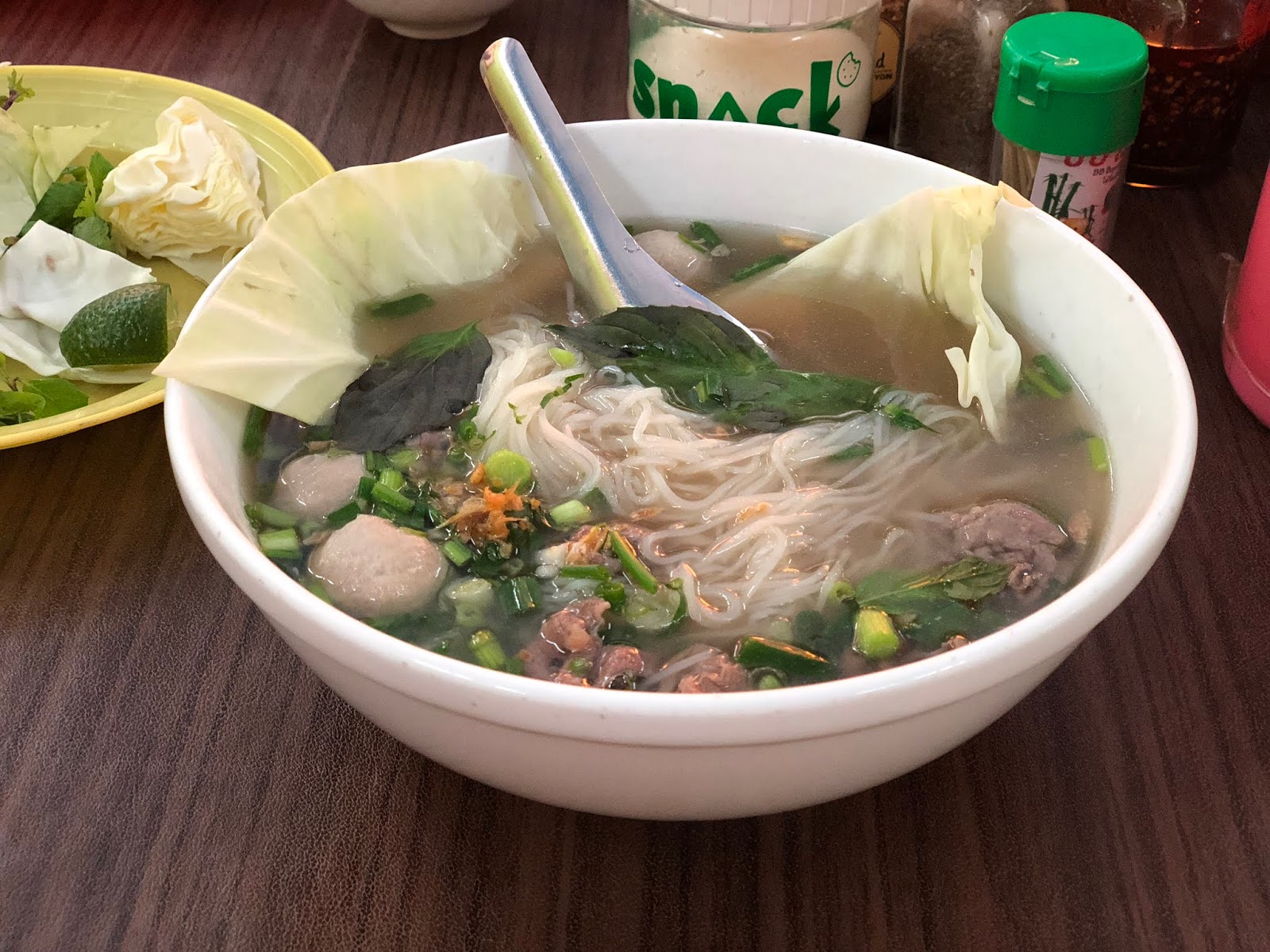 Handling the currency, Lao kip, was a tricky business; it was all too easy to confuse a five-hundred kip note (≈ £0.05 GBP) for a five-thousand kip note (≈ £0.45 GBP) or even a fifty-thousand kip note (≈ £4.50 GBP). You’d reach into your pocket and feel a thick stack of five-hundreds and begin to feel wealthy - but in reality these notes are worth only 5p each. It was worth spending time to process the profusion of extraneous zeros on each of your notes before handing any money over to shopkeepers. Even so, I think we all had a few flustered moments in our first experience of spending Lao kip. I think some of shopkeepers thought I was being deliberately obtuse when I got it wrong. I can’t help but think that a few of the zeros could be removed or they could perhaps use thousand-separating commas. It’s not like you’d ever see any prices ending in anything other than a zero. For reference, ₭1 LAK would be worth £0.000089 GBP… and even the most curmudgeonly pedant wouldn’t want to split a bill to that extent. 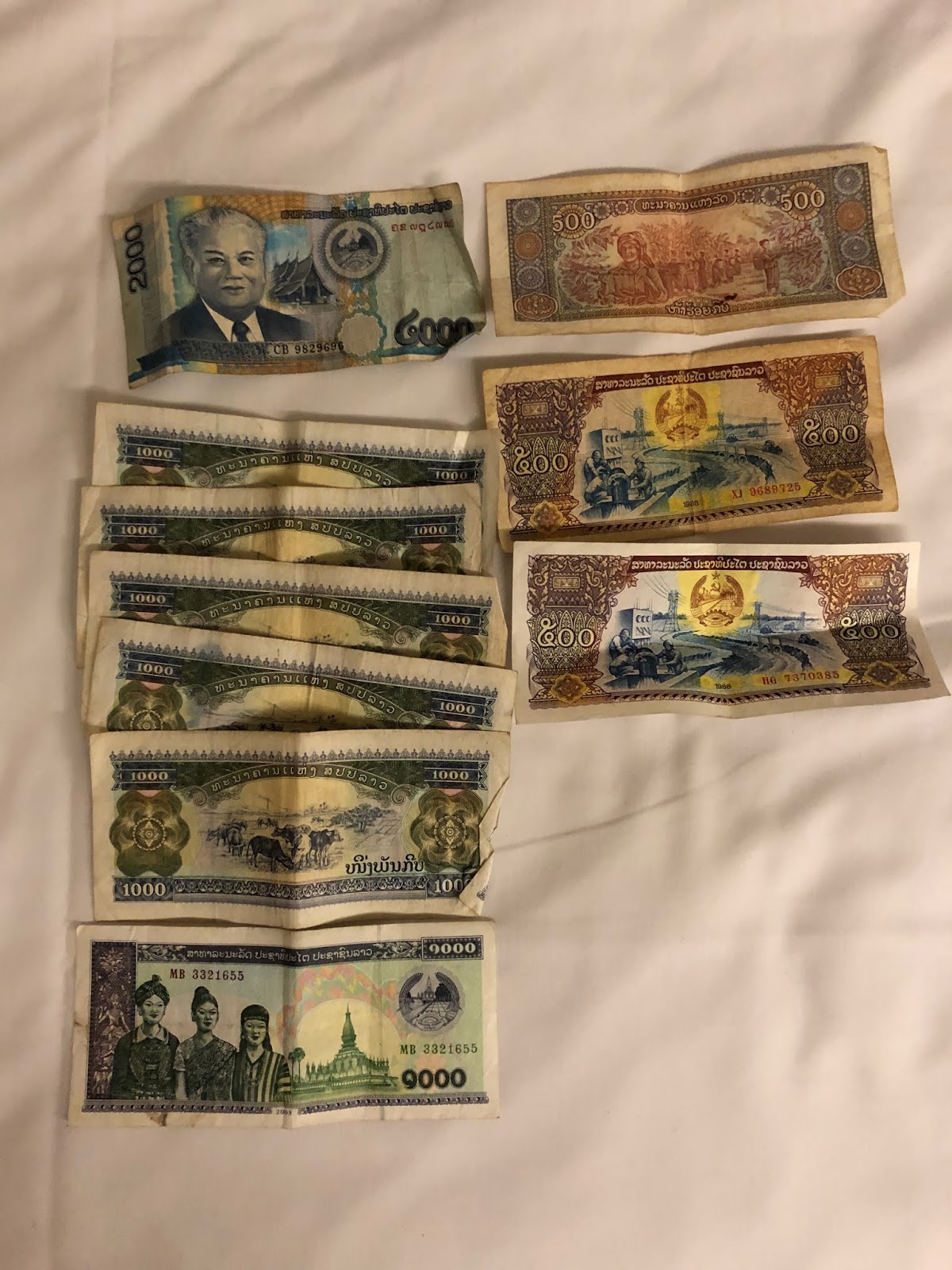 If spending money was the aim there were two or three main markets to visit. There was a so-called morning market, which sold everything from food and fabric to washing machines and snail mucus (a natural facial mask, apparently). The night market seemed to be spread over two locations, one was housed in uniform brick buildings down by the river, near the enormous statue in Chao Anouvong Park. This market seemed to be the place to get food or clothes. The other market, a little further downstream and fractionally higher up the bank had a Shoreditch feel, with bars in shipping containers, oil tanks for seats and electricity reels for tables - or I got that sort of vibe anyway. After traipsing around both markets, we settled into a small bar in the latter market and sampled some Beer Lao. We’d seen this brand on t-shirts that were for sale in the morning market. The beer seemed to be something of an institution, an iconic Laotian brand. We enjoyed drinking the five or six varieties they had on offer. They came in stubby ice-chilled bottles and all the varieties we tried were very good. The resulting hangover (inevitable, really) was perfectly tolerable and was gladly short-lived, but at first it seemed to make you unable to reach for that bottle of water on the bedside table. 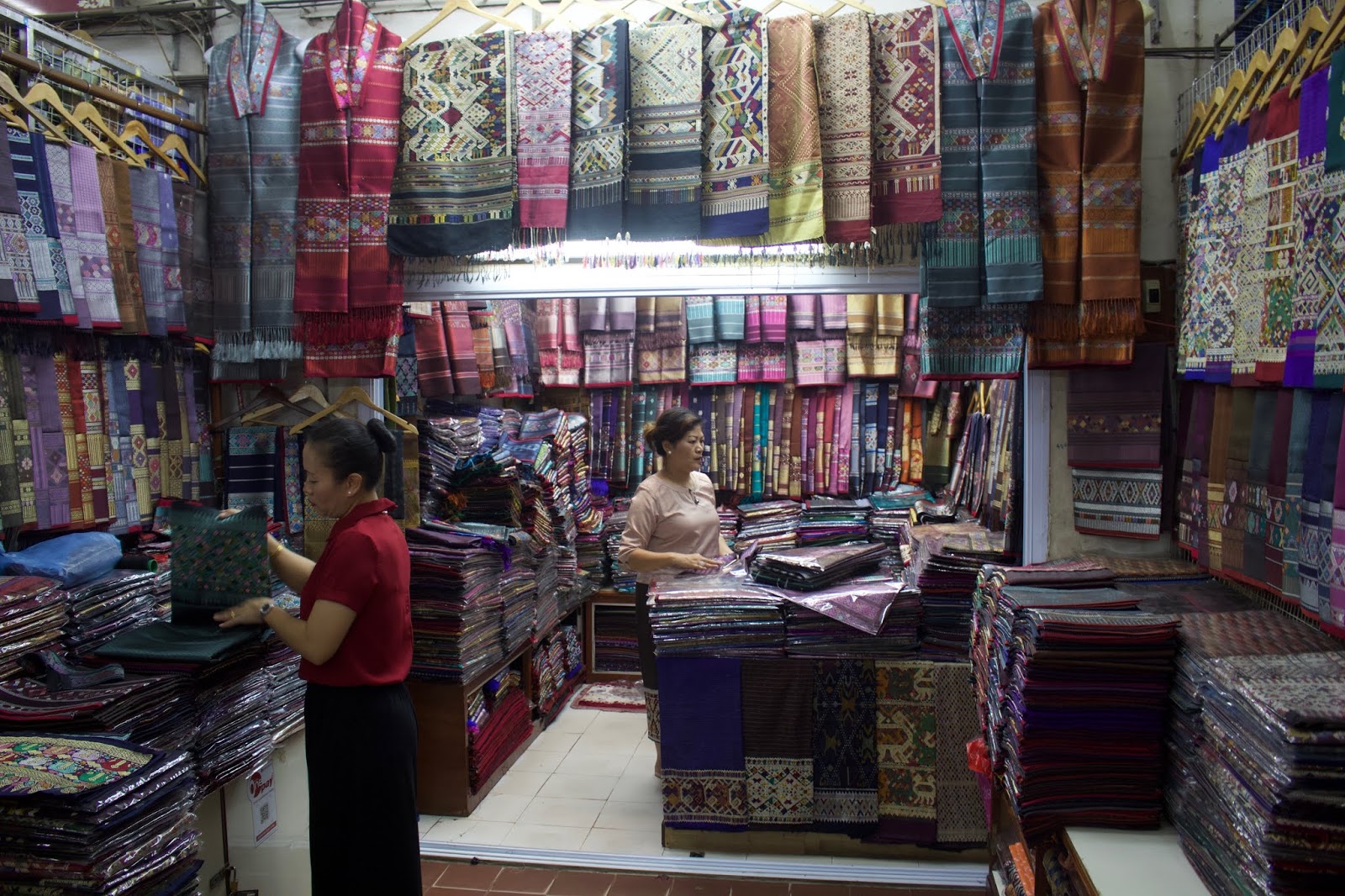 There were other vestiges of French colonial rule (independence came in 1953) here. We enjoyed a fantastic French restaurant near the Nam Phou fountain. The head chef visited each table personally and made suggestions. Everything we ordered was fantastic and they served Laotian and imported French cheeses on their cheeseboard. 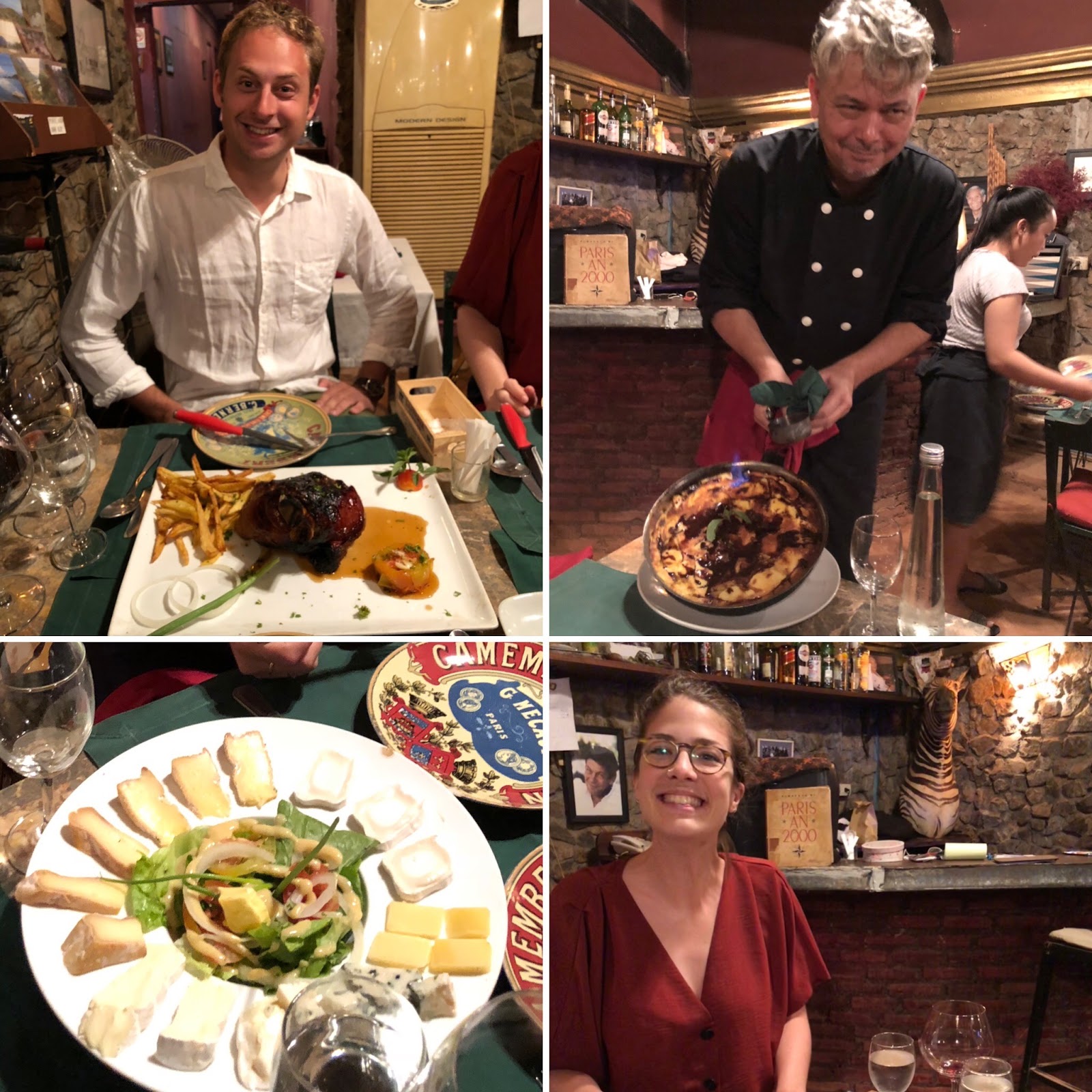 Laotian tuk-tuks were different to those we had used in Bangkok. Bangkok seemed to have a traditional rickshaw-style configuration, with two seats facing forwards behind the driver. Most of the tuk-tuks in Vientiane seemed to be slightly longer and the passenger seats were arranged with two benches facing inwards along the sides of the vehicle. When not in use, the drivers could be seen sleeping in net hammocks (stored in the roof). Select the right tuk-tuk and you could load six or eight people in them! I felt fearful that we might break the back axle if we tried any more! 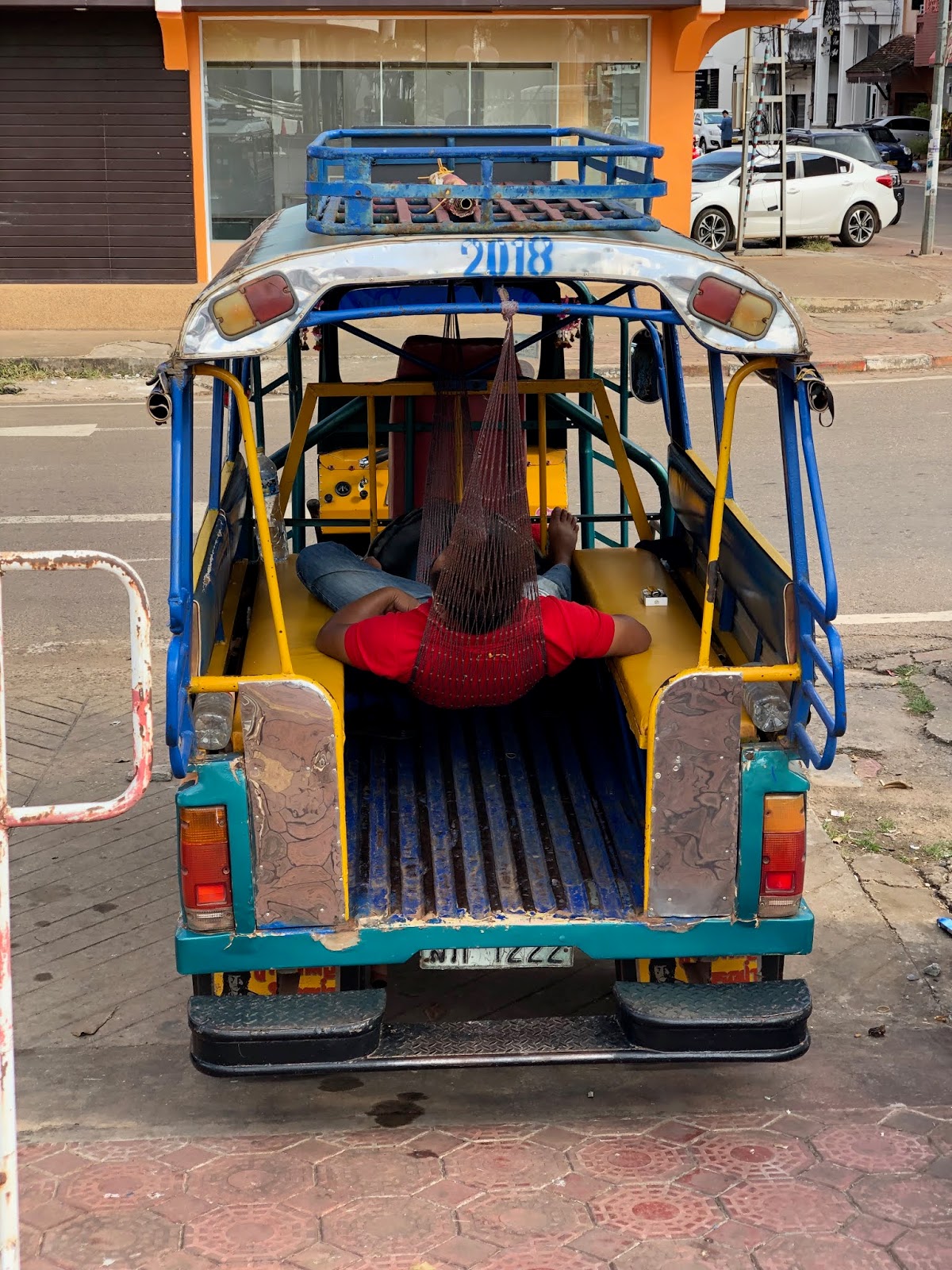 On our last full day, Tuesday 30th October 2018, I realised I still had a few places that I wanted to see. I didn’t want to exhaust myself before the rehearsal and concert so I mentioned the idea of taking a tuk-tuk at breakfast and three others (Joel, Poppy and Will) wanted to come too. Four was a good number for these tuk-tuks. We approached a few drivers outside the hotel and bartered a return deal to include a waiting arrangement at each place. The driver was also willing to accept US dollars (which saved us playing a game of how-many-zeros kip roulette).

The tuk-tuk took us to the Golden Temple, which seemed quite a way out of town and we visited the Patuxai Monument on the way back, which was more within walking distance of the hotel.

The Golden Temple is a 45m high Buddhist stupa which was first established in the 3rd century. It was interesting to look around the various buildings - this iconic structure is a national symbol of Laos and it is very photogenic. 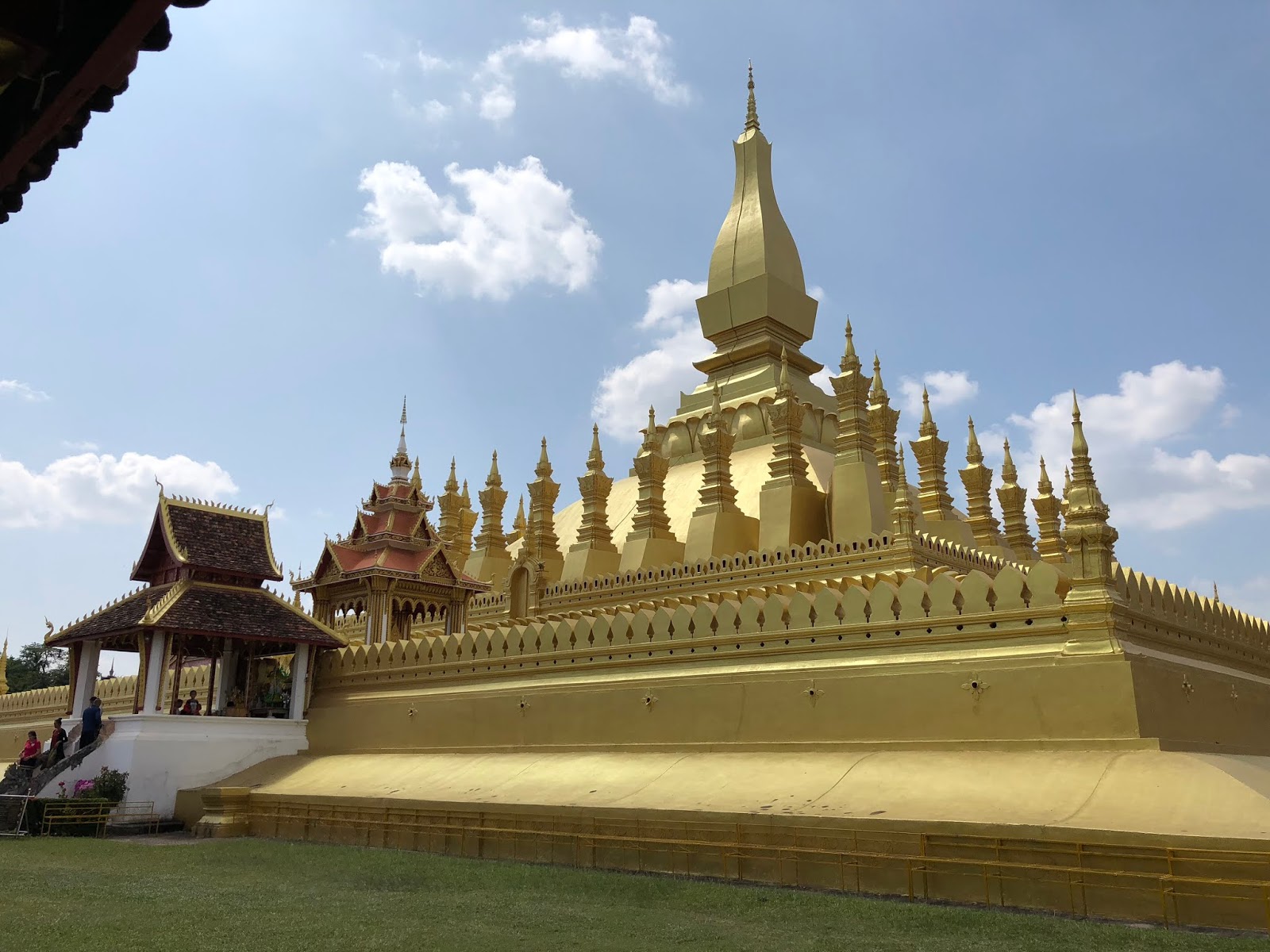 We spent an hour or so at the Golden Temple before tuk-tuking our way to the Patauxay Monument, a ceremonial gate and war memorial. We went up the steps to the top of it, even climbing the final spiral staircase. We admired the views in all directions. This mostly-concrete structure has some highly decorated areas, most impressive of all is the colourful interior decoration looking up from underneath the main arches, with depictions of Gods: Vishnu, Brahma and Indra. 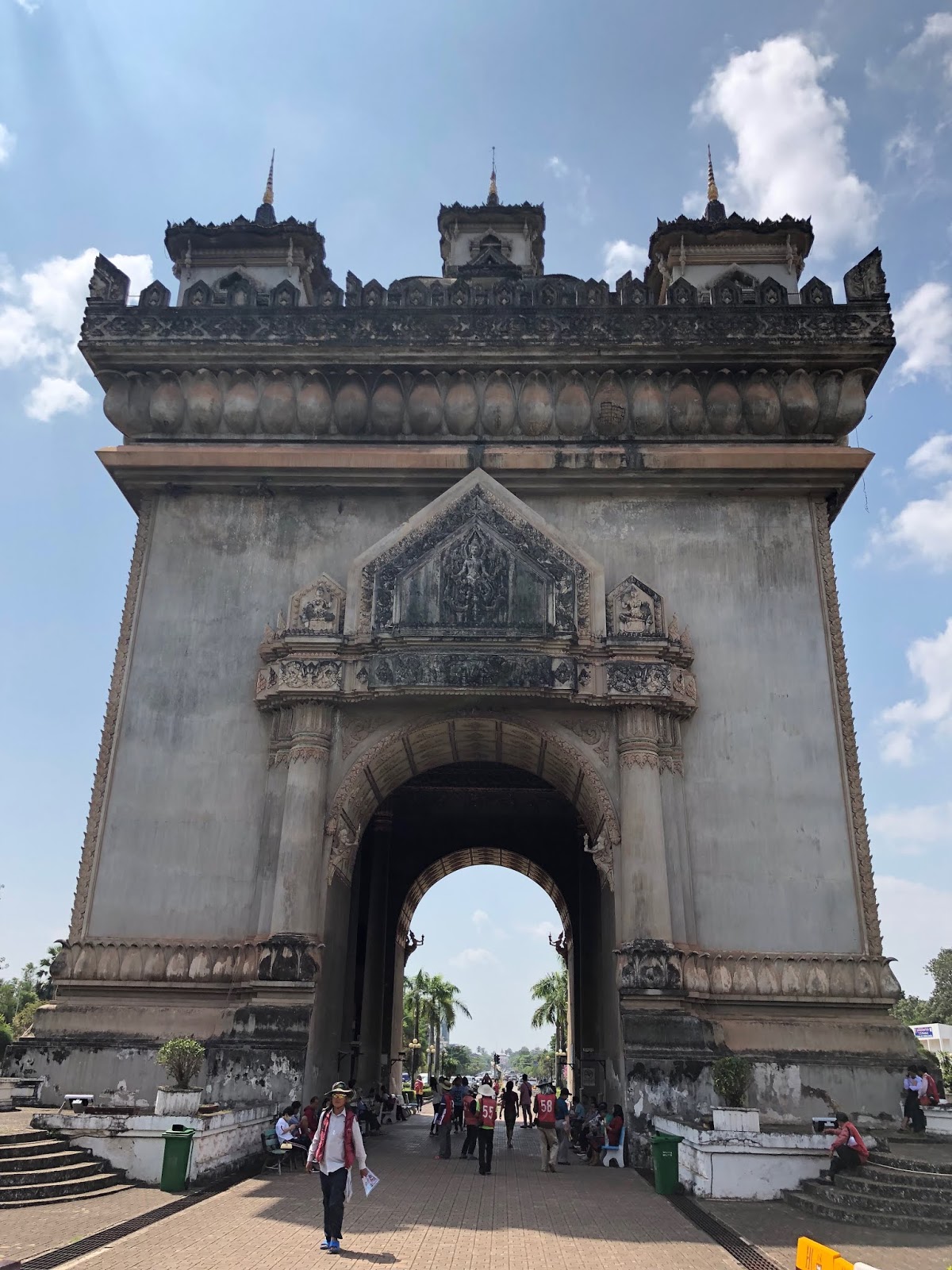 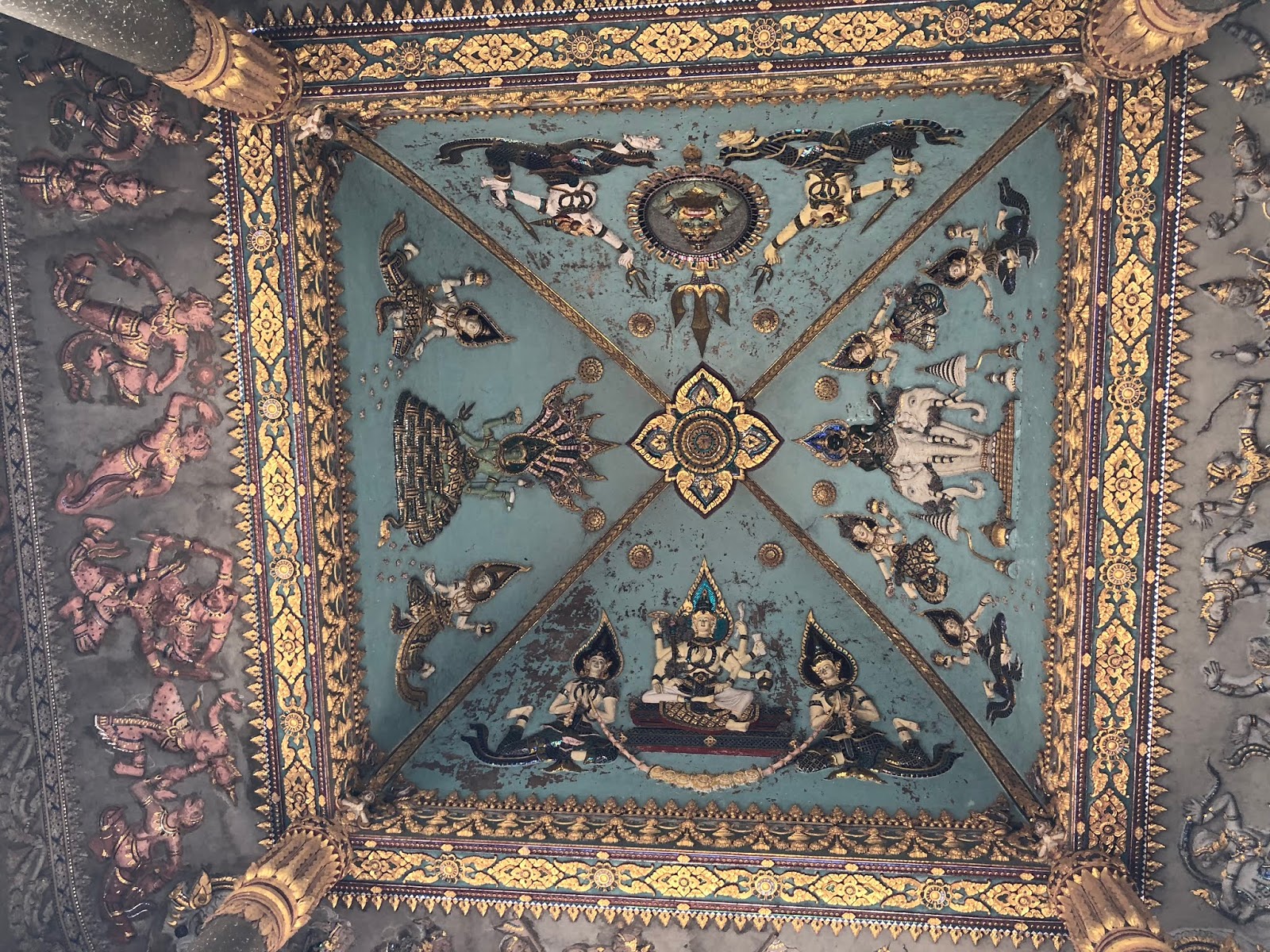 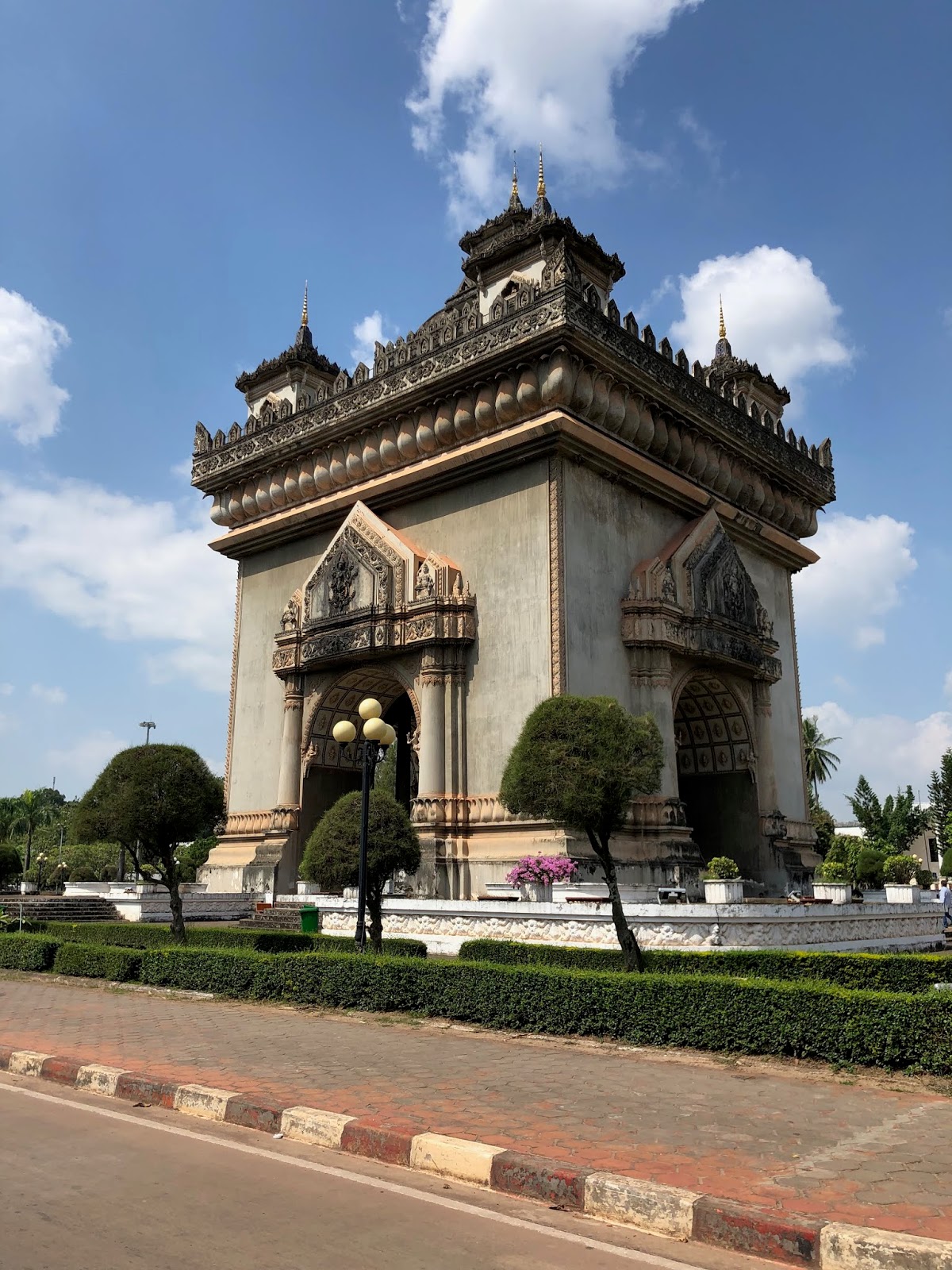 We were back at the hotel in good time before the 14:00 rehearsal at the National Cultural Centre. This magnificent temple-like building of red, white and gold was just opposite the hotel. We rehearsed in there, and focused on the new music in particular and returned at before 19:00 ready for the performance. 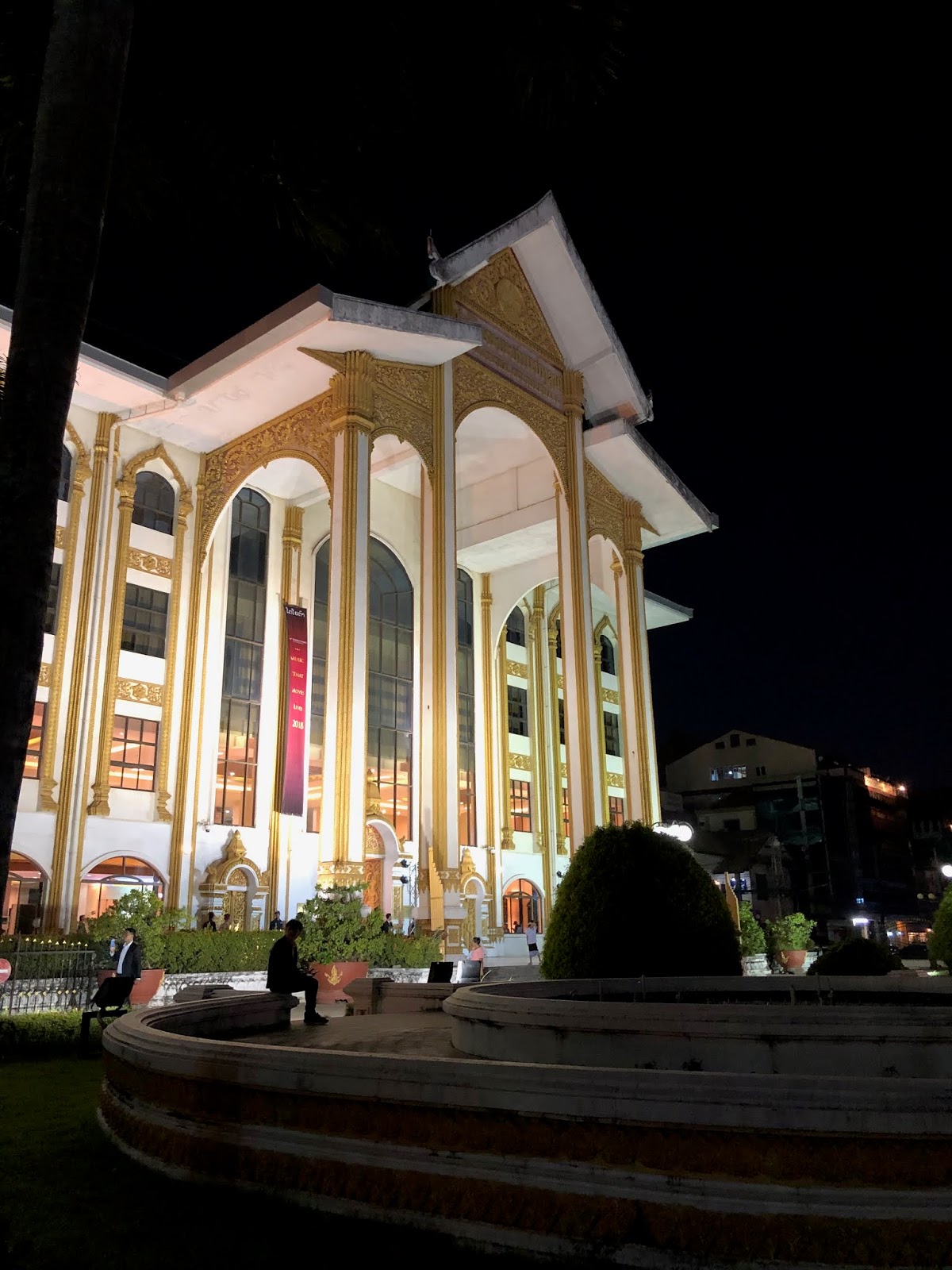 The performance featured the National Anthem of Laos as well as other local tunes: Vientaine Kwanjai, Sieng Kane Lao and Dao Lom Duen. All had been arranged specially by Annette Isserlis. These tunes were distinctively Laotian and Annette has succeeded in imitating the undulating sounds of the Khaen (the instrument I had heard in that riverside ceremony by the Mekong) in orchestral form, with two natural trumpets. It was a great concert all round, and the programme was slightly curtailed to allow time for the local pieces - for instance we skipped the 3rd movement in Handel’s Water Music and the final two movements of the Bach Concerto for Two Violins.