Thursday, 1 Jan 2015, 21:00
It was great to spend New Year's Eve and New Year's Day in Saarbrücken in Germany for a concert of music by Bach and Telemann. The concert was given by the French group Le Concert Lorrain.

The section of three natural trumpets and timpani included myself on first trumpet, William Russell on 2nd and Olivier Picon on 3rd, with Frithjof Koch on Timpani. We played music intended for the New Year, including Part 6 of Bach's Christmas Oratorio (BWV248), Bach's Sinfonia in D Major (featuring Solo Violin) (BWV1045) and the cantata for New Year: 'Singet dem Herrn ein neues Lied' (BWV190). The concert also included a concerto for three oboes and three violins by Telemann and an organ concerto. 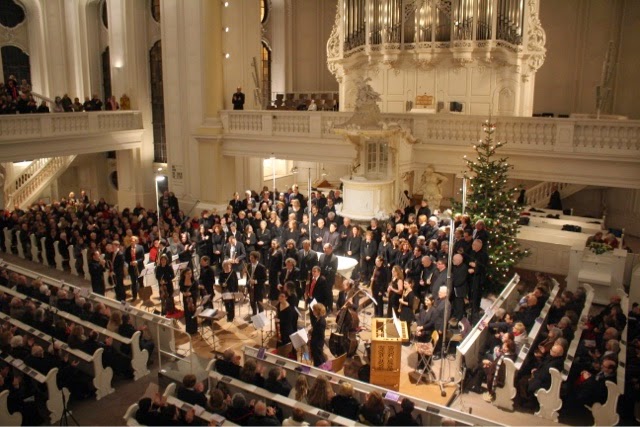 The Ludwigskirche is an excellent venue. It is a huge indoor space and the presence of a capacious audience seemed to make little difference to the acoustic. The interior decor is elaborate and nearly everything is white. The light at this time of year gives the white a slightly blue tinge, giving the church the feeling that it might be a huge ice palace!

It was great fun to see in the new year with the orchestra. We celebrated in the crypt of the church and we left just before midnight in order to see the fireworks exploding around the city. There were fireworks going off everywhere, and we had a commanding view from the Hotel am Triller (situated on a hill). As the hotel's own display was launched from a lower concourse, I was too petrified to wish anyone a Happy New Year until about 00:20.
Le Concert Lorrain is an excellent orchestra to play with. The choir was also very good and we were impressed that they had their own warm-up coach, in addition to their conductor. The soloists, Kristen Witmer (Soprano), Margot Oitzinger (Alto), Bernhard Berchthold (Tenor) and Peter Kooij (Bass) were all entirely excellent - giving memorable and rhetorical recitatives and arias in the cantatas.

It was a great way to bring in the new year! The more superstitious members of my family have often said that you should spend New Year's Day doing what you would like to do for the rest of the year. I certainly hope there will be more Bach in the pipeline! For many people, spending a bank holiday "working" would be a great disappointment, but this concert was a great pleasure for me and it is always a great privilege to play this music.