Sunday, 24 Mar 2019, 18:00
I performed Monteverdi’s Vespers in the Swedish capital city of Stockholm on Sunday 24th March 2019. Prior to this visit I had spent only a few hours in Sweden (in Malmö, on a day trip over the railway bridge from Denmark) so I took the opportunity to extend my visit over a long weekend that tied in with the cheapest flights. This opportunity had arisen at fairly short notice and my Mum (who lives on the Isle of Man) had already arranged to fly over to the UK to visit me and my wife (Jo) over that weekend. Rather than turning down the engagement or cancelling Mum’s trip, we decided that it was a great opportunity to visit the Swedish capital together - so that is precisely what we did.

We arrived at Arlanda Airport on the evening of Friday 22nd March 2019 and took an Uber to our AirBnB in the Huvudsta area, to the West of Stockholm’s city centre. This location would prove to be ideal as it was equidistant between the central station and the concert venue, and also convenient for travelling to the Drottningholm Palace. Our priority on arrival was finding dinner that evening. It seemed as if everything was going to be closed, so we were relieved to eventually find a cosy bar and pizzeria that was still serving.

Next morning, after purchasing our 72-hour tickets for the underground (Tunnelbana) we speedily moved towards the centre of Stockholm on the T10 line - part of Stockholm’s comfortable and immaculate underground railway network. We walked from the central station towards the Gamla Stan (old town) island, a historic part of the Stockholm archipelago - the largest archipelago in Sweden. We enjoyed a traditional Swedish breakfast in a tiny cafe and I learned a new word. ’Fika’ is quite difficult to describe as it is an idea, a state of mind and an important part of Swedish culture - and it doesn’t seem to be like breakfast, brunch, lunch or afternoon tea as these tend to happen at a particular time of day whereas fika could happen at any time. Fika seems to involve socialising over a hot drink and (an ideally homemade) cake, and it seems to be something of a Swedish ritual. We sat in bay window in this cosy cafe and we were able to look out towards the cobbled streets and well-kept 18th-century buildings nearby, while enjoying fika. After this we explored the narrow streets of the Gamla Stan and happened upon the Royal Palace just as the changing of the guard was due to happen. We waited for a few minutes and watched this ceremony of marching, bugle calls, natural trumpet fanfares and drum signals.

Next we walked over the Strömbron (the Stream Bridge), past the Grand Hotel and around the next bay (Nybroviken) towards the Performing Arts Museum (Scenkonstmuseet). We had to visit today (Saturday) as the concert was on Sunday and the museum would be closed on Monday. I had wanted to visit the Musical Instrument Museum (Musikmuseet) here and I was a little disappointed to learn that the Musikmuseet had closed in 2010 and only a few instruments had been curated into the public displays in the new Scenkonstmuseet, which opened in February 2017. Fortunately the museum was quite interesting and fun, and I did get the opportunity to see two instruments I was interested in: the first was an oboe da caccia made by Johann Heinrich Eichentopf in Leipzig in 1724 - the instrument has a brass bell and a decorated garland [and I have engraved (though the original is mostly stamped) a modern reproduction of this instrument]; the second instrument I was interested in was a contrabass trombone by Georg Nicolaus Öller made for the German Church in Gamla Stan in Stockholm in 1639. It was worth visiting just to see these two instruments alone, but I hope to return one day and see more of their collection of musical instruments. 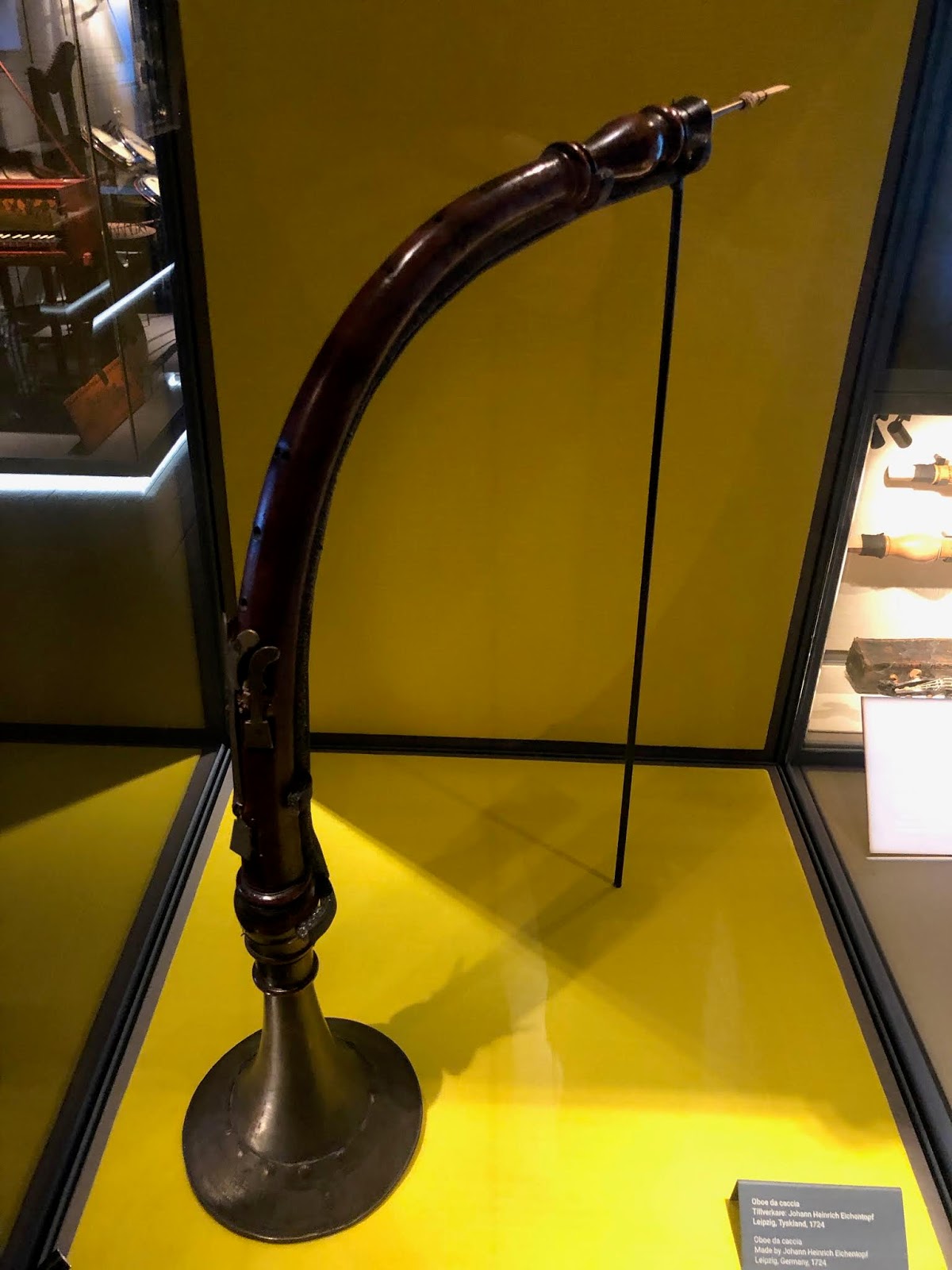 After the museum we directed ourselves towards the 1904 WienerCaféet and enjoyed a Swedish Princess cake: a domed symphony of icing sugar, green marzipan, whipped cream, soft sponge and raspberry jam. There would be lots more walking around Stockholm, particularly around the harbours, that evening and we eventually found a convivial restaurant for dinner; Samborombon in Gamla Stan was a hit with all three of us. It was still relatively early in the evening, but we were ready to go back to the AirBnB to relax, calling in at a supermarket on the way home for breakfast supplies. 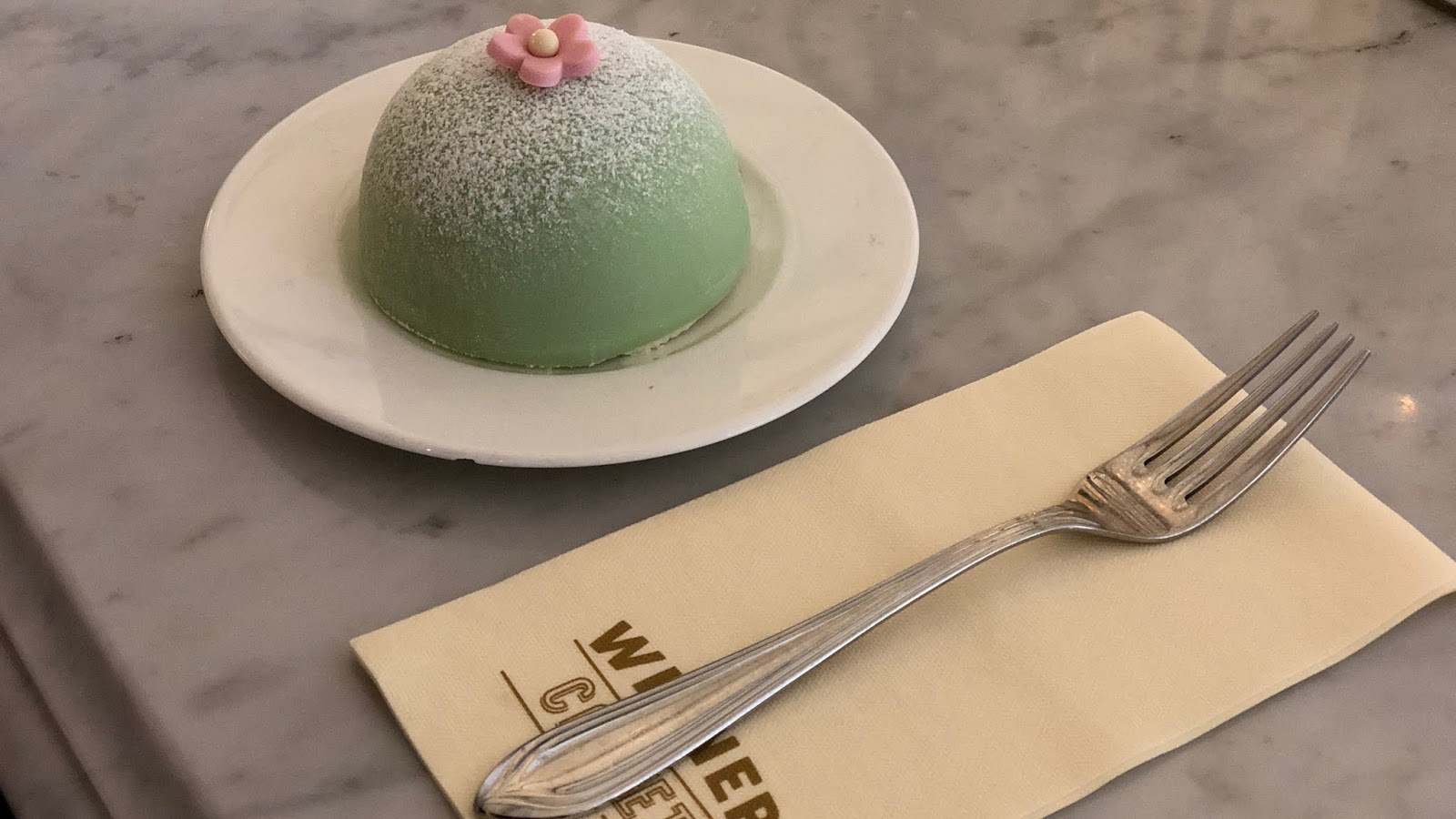 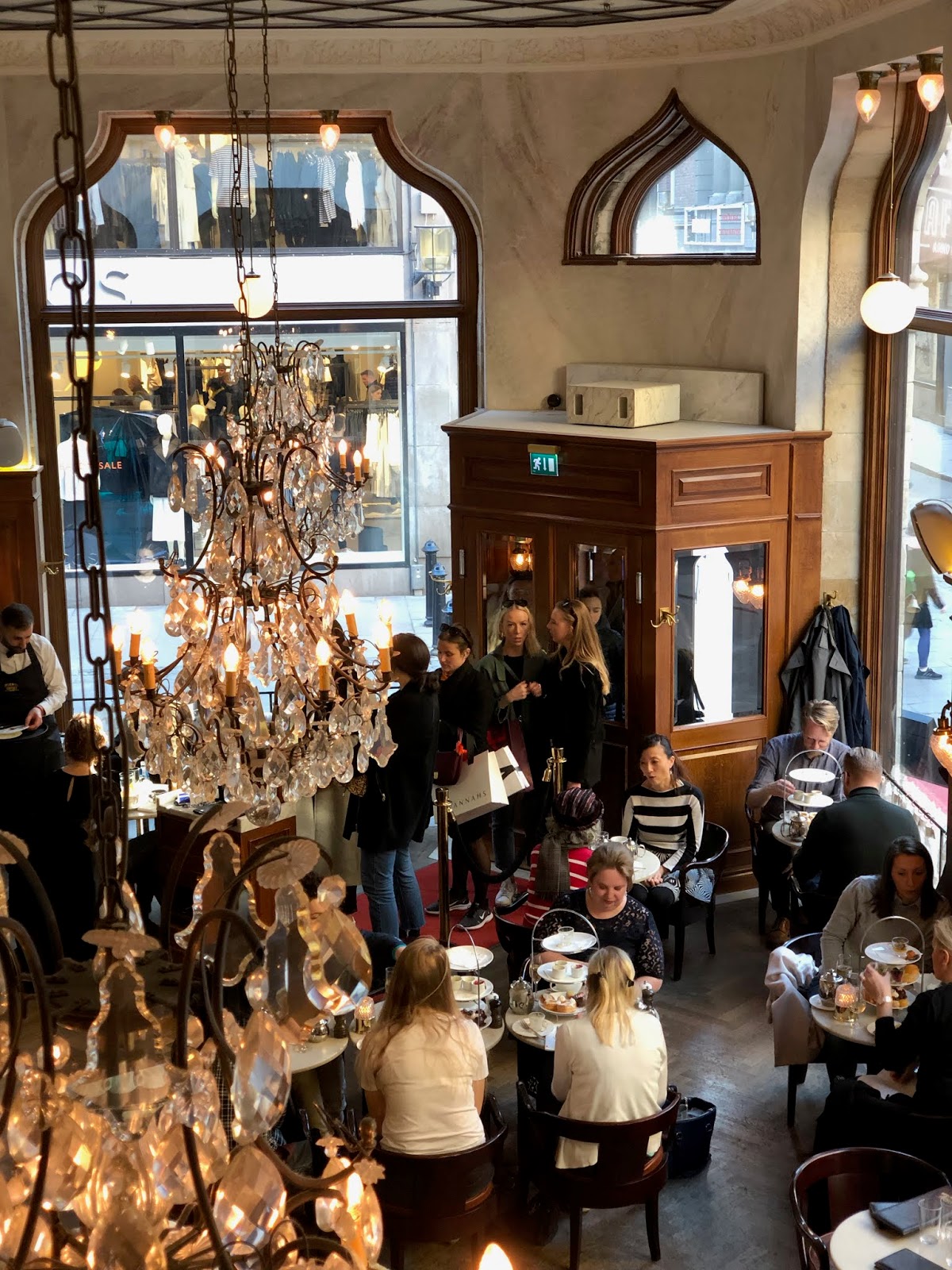 After breakfast on Sunday, we walked from our apartment down a wooded path (observing a great spotted woodpecker at close quarters on the way) towards a nearby bus stop. A short time later, we arrived at Drottningholm Palace just before 10am and we had a few minutes to admire the long approach to the front of the building before it opened to the public at 10am. 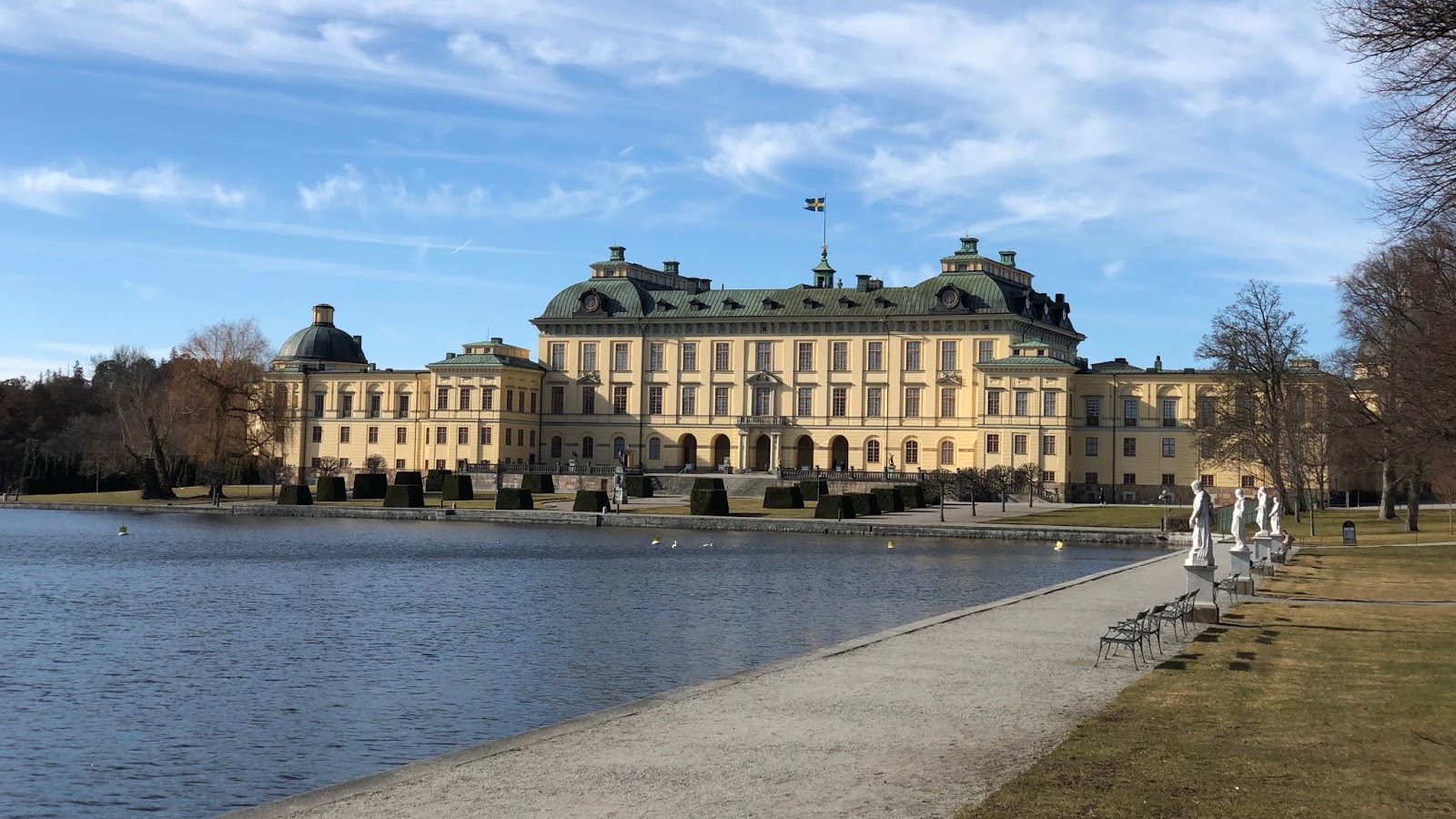 We had intentionally arrived early in the morning so that I could visit the palace with Mum and Jo before my rehearsal at 13:00 at the Sankta Birgitta Kyrka; its modern spire was visible in the distance from Drottningholm and it was just a short walk away, over two bridges. We explored the available two floors of elaborate rooms and furniture inside the palace and wandered in the extensive grounds behind the palace afterwards. Mum and Jo had booked to go on a tour of the Baroque theatre. The first theatre tour in English (the only way to see inside the theatre was to take a guided tour) was not until noon, and I needed to be on my way to the rehearsal by then, so I missed out on that. 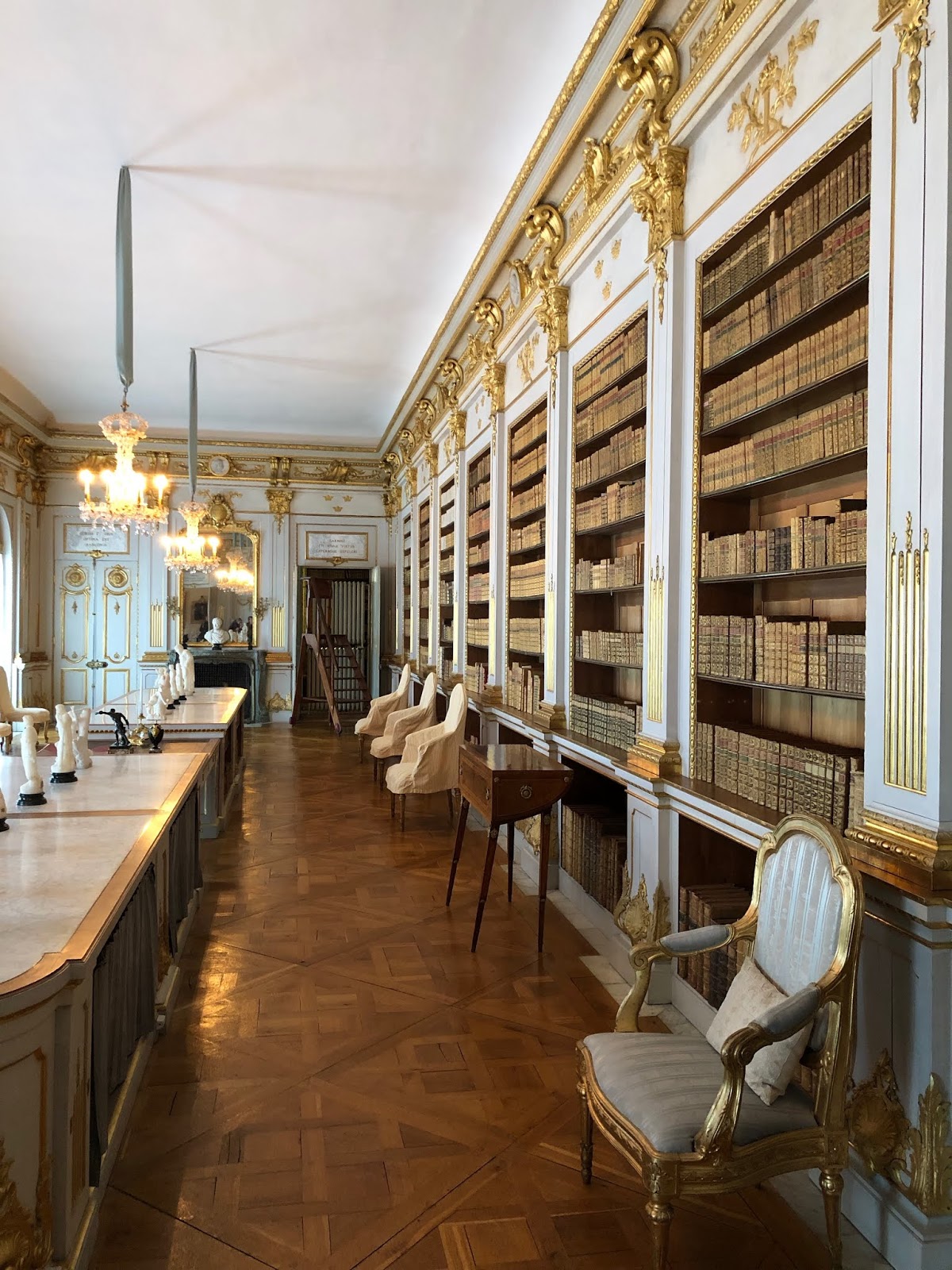 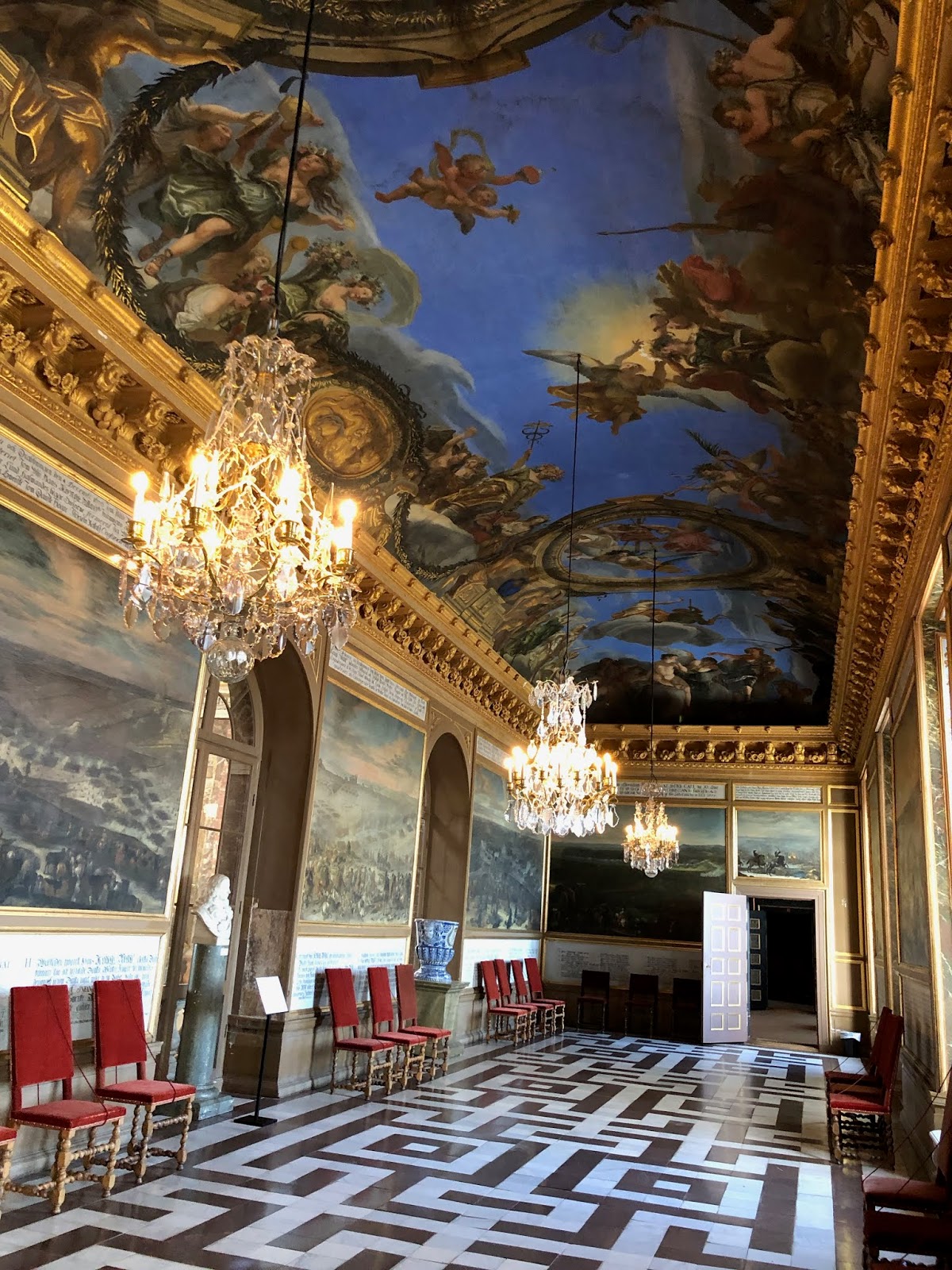 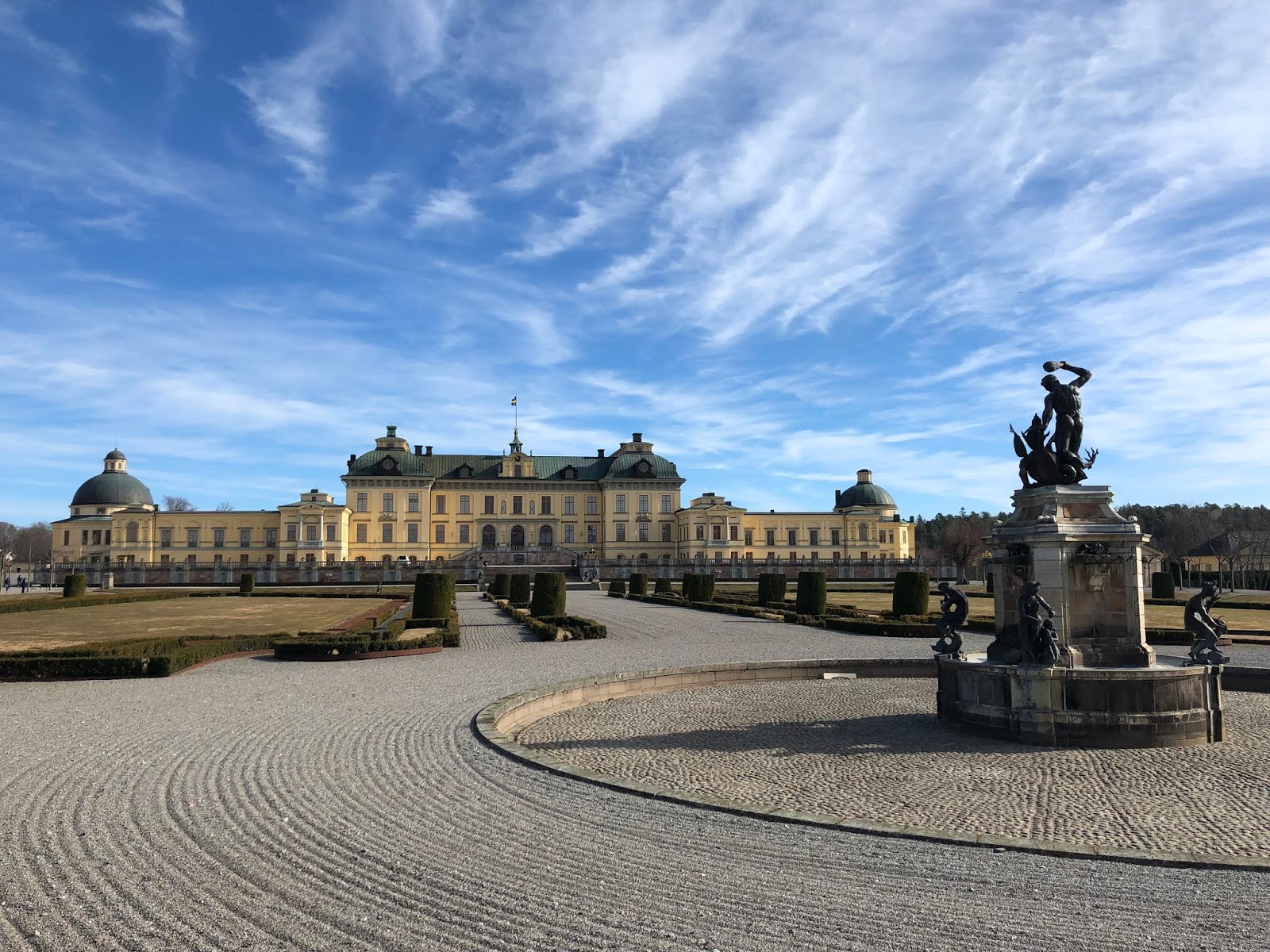 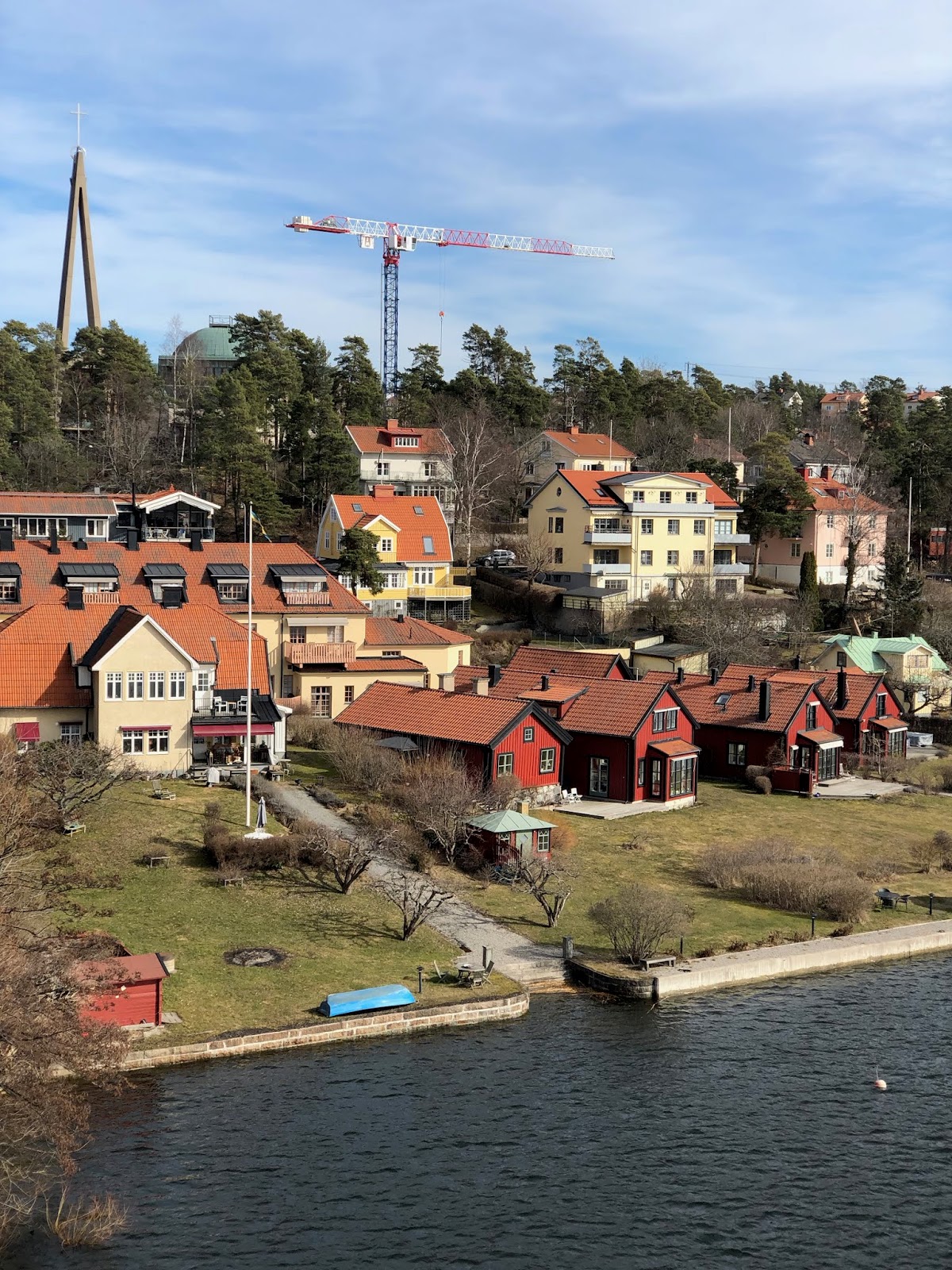 I crossed the two bridges from Drottningholm and arrived at the Sankta Birgitta Kyrka in Nockeby, Bromma. The architecture of this church was bold and modern, with a star-shaped central room underneath a copper-clad lanterned dome, and an imposing bell tower set to one side. It was designed by Rolf Bergh and completed in 1962. I knew nobody else on this project, and I was greeted with the warmest of welcomes by my colleagues as we all arrived. I met my cornetto playing colleague for the day, who had flown in from Copenhagen, Lene Langballe. Lene and I got on really well together and we had fun in the rehearsal and concert. I was very impressed with her cornetto playing, she was great to spend time with, and she played some stunning passages on the recorder as well.

The period instrument ensemble assembled and everybody was so friendly - people came over and introduced themselves to us before we began rehearsing with the choirs. There would be several choirs involved in this performance: the Lilla kören (little choir), Sankta Birgitta Kyrkokör (Sankta Birgitta Church Choir), Juniorkör (Junior Choir) and Ungdomskör (Youth Choir) were directed in turn by husband and wife Pelle and Carina Olofson with a period instrument orchestra, led by violinist Eva Lindahl. Soloists stepped forward from the choir and they all did a remarkable job in singing this demanding repertoire.

It was a lovely group of people and I felt like we made a lot of progress as friends in the short time we had together. I got talking to the trombone section (Urban Wilborg, Nils Carlsson and Anders Wiborg) about the contrabass trombone by Öller that I had been to see yesterday. Anders (who played the bass sackbutt) laughed and told me that he knew about this instrument and that he lives around the corner from the museum but he has not yet been to see it. I’m sure he will be going there soon! There was a great atmosphere and good humour in the rehearsal. We all laughed when it was announced (in all seriousness) that the viola da gamba was too loud. The badinage was that it drowned everything else out!

The concert took place at 16:00 on Sunday 24th March 2019 and it was free to attend. Mum and Jo came along and they both enjoyed listening. We played an untransposed Magnificat and Lene and I did an excellent Deposuit together. I really enjoyed playing alongside Lene, with me playing second cornett. I was really glad that I was able to play for this project in Stockholm and that Mum was still able to see Jo and me that weekend. All this while enjoying sightseeing around Stockholm and obligatory fika (particularly Swedish Princess cake)! 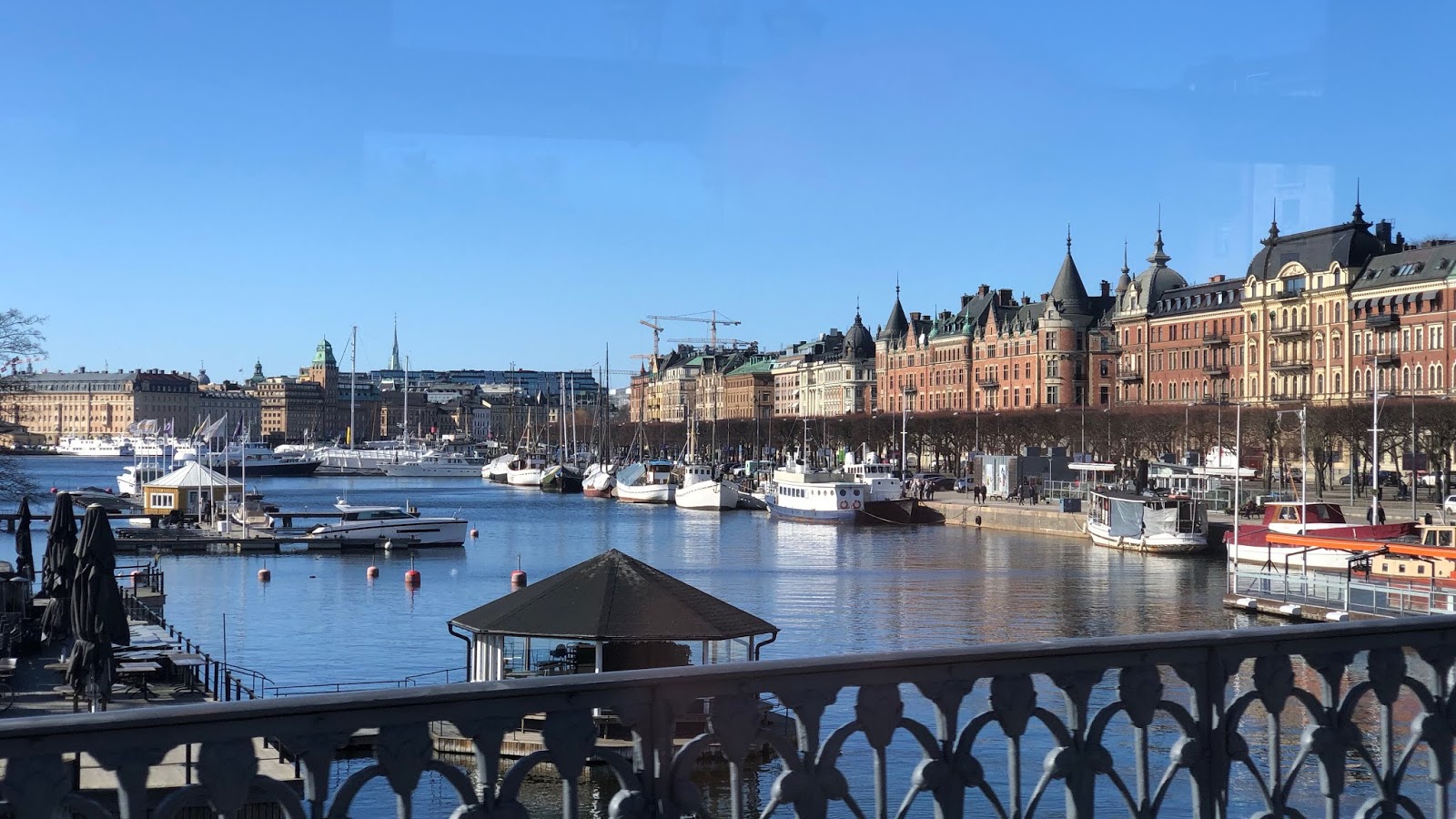 Our flight was not until the evening on Monday 25th March 2019 so we had the majority of the day to enjoy more of Stockholm and make the most of our Stockholm Metro tickets. We wanted to visit the Vasamuseet - a museum housing a ship called the Vasa. It is the most visited museum in Scandinavia. We took the Tunnelbana to Stockholm Central Station, left our luggage in a locker there and took a tram, crossing the Djurgårdsbron to reach the Vasa Museum. 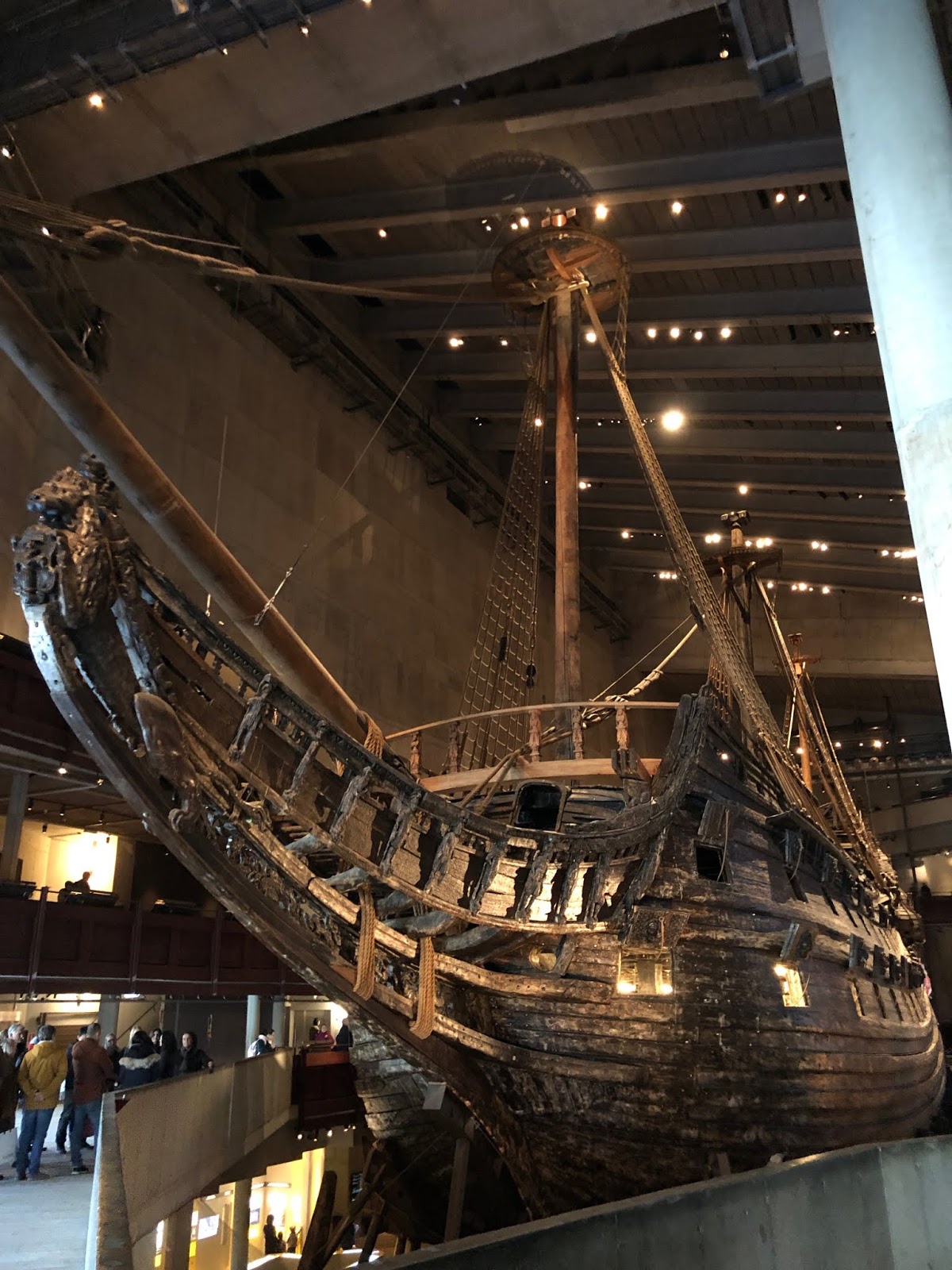 This warship capsized and sank in Stockholm in 1628, around 1 kilometre into its maiden voyage. Thanks to: the brackish water of the Baltic Sea, the absence of shipworm, and a fairly even landing in the underwater silt, it was possible to salvage the Vasa from the sea bed. The Vasa was raised in 1961 after 333 years on the seabed and it set a world-leading precedent for others to follow (including the Mary Rose, which was raised in 1982). The Vasa is the world’s best preserved 17th-century ship. The vessel and its artefacts are a well-preserved time capsule of 17th-century life. The museum is one of the best museums I have ever been to, and the view of the Vasa itself is one of the most impressive and memorable things I have ever seen. 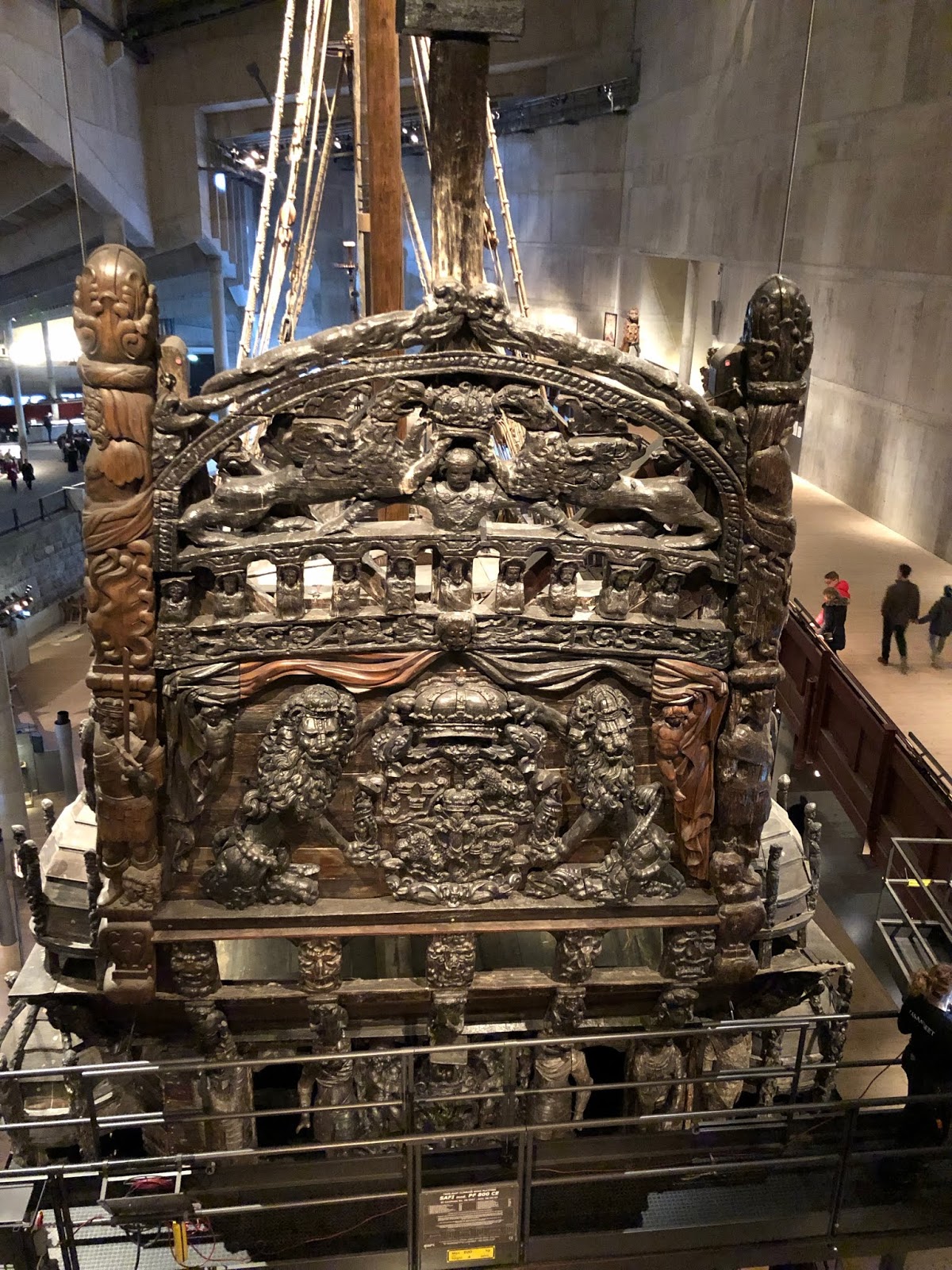 After visiting the Vasa Museum we decided to return to Gamla Stan by taking a boat across the harbour. Rather brilliantly, our Stockholm Metro tickets allowed us to travel on the boats at no additional cost and it was a great way to travel. The views of the tightly-packed buildings and spires of Gamla Stan looked great from the sea.

We found time for fika and it was nice to take the weight off our feet from standing and walking around the museum and on the boat. We had a narrow window to tie up loose ends from the trip so far. Jo wanted to buy some gifts in a Swedish-style Christmas shop and we attempted to visit the Lutheran Church (which was closed), but we saw it from outside and heard the lutheran chorales playing on it bells at 16:00. From Gamla Stan, we returned to the central station on the metro and took an express train back to Arlanda airport. With three of us travelling together the ticket cost only 450kr Swedish Krona (SEK) in total (≈£12 GBP each). I realised that we’d all been using our Monzo cards for everything and that none of us had come into contact with any of the local paper currency. I love using technology and I approve of any method that allows you to return home without pocketfuls of small denominations of foreign coins. However this convenience is matched by a sense of loss for handling the local currency and learning about the local culture and history as a result. This was something that I had really come to appreciate on the tour of Southeast Asia last year, and I looked forward to discovering what would be on the notes and coins in the next country we would visited.
We enjoyed a fantastic trip to Stockholm and I would love to explore more of Sweden. From what I saw of it, it is a fantastic country. As cities go, Stockholm was particularly lovely: picturesque and clean with friendly people and fantastic infrastructure. Tak! (P.S. Go to Stockholm, it’s great).
Concert, Cornetto, Monteverdi, Renaisannce, Tour, Touring, Travel
Russell Gilmour