Saturday, 12 Jun 2021, 20:00
It all began with doubt as I boarded the train towards London St. Pancras. In light of the coronavirus situation French entry requirements had changed just 10 hours before I travelled, which left some doubt as to whether I would be permitted to get even as far as the Eurostar lounge. Luckily, entry was permitted. I travelled to Puteaux, to the west of Paris where I would be in quarantine. Other Parisians were observing a strict curfew between 9pm and 6am as well.
While in quarantine I was able to do some research and writing for my natural trumpet book, and after another negative PCR test I was free to explore Paris ahead of the first rehearsal with Les Talens Lyriques. I walked east from Puteaux over the Seine to the Arc de Triomphe. I then went south to the Eiffel Tower before crossing the Pont de Bir-Hakeim. I improvised a route back to Puteaux through the 16th arrondissement and through the former royal hunting grounds of the Bois de Boulogne. I had been fairly near the Roland Garros stadium where the French Open tennis has been taking place. 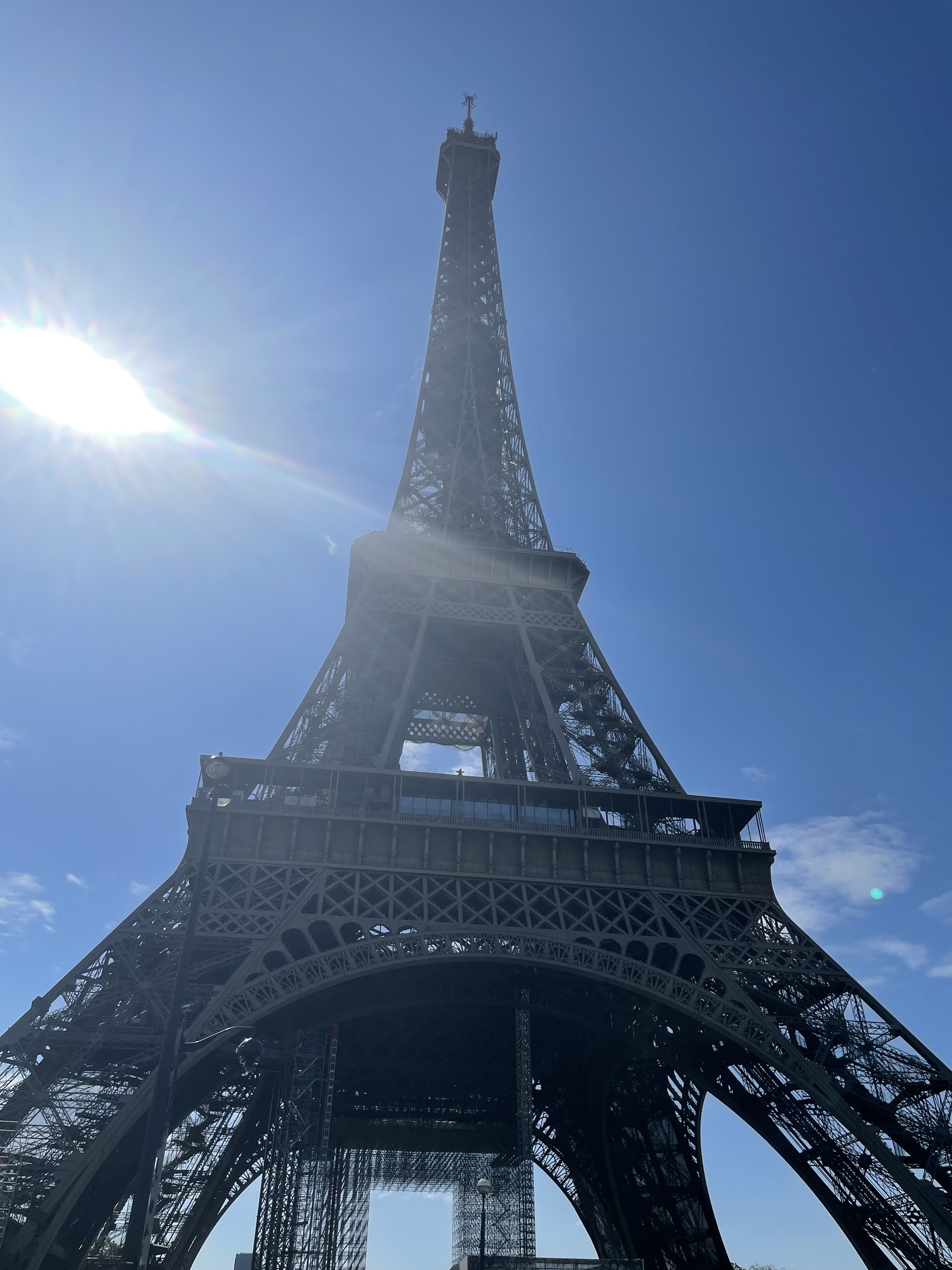 Rehearsals for the opera Idomeneo [K. 366] (1781) by Mozart took place at the Jean-Baptiste Lully Conservatoire de Puteaux on Monday 7th June 2021. It was great to be back with Les Talens Lyriques; they had gone above and beyond to support our travel to France for this project. Thanks so much to the team for their incredible organisation. [I found out that another UK-based musician, who was travelling to France from the UK just a few days later had been refused entry; I felt even more fortunate to be here.]
After a few more days of rehearsals in Puteaux, the orchestra met at Gare du l'Est and travelled to Würzburg (via Frankfurt). I had never had the pleasure to visit Würzburg before, though I have been to many of the surrounding towns and cities in the Franconia region in the state of Bavaria. I had recorded Bach's Second Brandenburg Concerto in 2019 in Ansbach just 85km away, and I had stayed just 30km away in Iphofen when David Staff and I bought a large amount of sheet brass from Nürnberg for our workshops.

Würzburg is a charming place. I enjoyed a brilliant view of the city from my hotel room on the 7th floor and could not wait to explore. We had a Covid test upon arrival in the hotel, and then went more or less directly to the rehearsal in the resplendent Würzburg Residence (Würzburger Residenz) which was built between 1720 and 1780. This building is certainly an impressive one, and a historically-apt venue for Mozart's Idomeneo, which was commissioned in 1780 and premiered in 1781. We rehearsed and performed in the Kaisersaal, a magnificent room in the centre of the Residenz.

Les Talens Lyriques gave two performances of Mozart's Idomeneo to socially-distanced audiences on two consecutive nights (10th and 11th of June 2021) with the second performance broadcast on the radio. I last played with Les Talens Lyriques in Bucharest in September 2019, and it was great to be back under the brilliant leadership of Christoph Rousset. He expertly directed the orchestra, choir and soloists from the fortepiano, as I imagine Mozart might have done. It was also so wonderful to have an audience again.

The Würzburg Festival Choir were very refined, and the soloists were excellent:

I played first trumpet with Will Russell on second, with François Garner on timpani. Before leaving the UK I had made (specially for this performance) two boxwood mutes for our natural trumpets. The design of the mutes was based on an original (Renaissance or Baroque) mute (MI 604) from the collection of the Germanisches National Museum in Nüremburg. I made the mutes from English boxwood from a tree I felled myself several years ago. It was a great thrill to hear the sound of these muted trumpets being played along with such a wonderful orchestra. Mozart's father Leopold Mozart wrote on 7th December 1780 (see 'The Letters of Mozart and His Family' - Translated by Emily Anderson, Vol. II 1938, revised London 1985) that: ‘The main thing anyway is the trumpet mutes. That is something strange and new. Hornists have always been able to play such a piano and to help by putting a handkerchief in the bell. It is easier with the horn than the trumpet because the bell is near the hand. All hornists know the advantage of such a piano.’ (Translation: Tom Crown). Claudio Monteverdi (1607), Marin Mersenne (1636), Maurizio Cazzati (1665), Daniel Speer (1697) and Johann Ernst Altenburg (1795) wrote for or about the natural trumpet mute. There are two Historic Brass Society Journal (1991, pg. 263) articles (by Peter Downey and Tom Crown) in which mutes are discussed, and in which Mozart’s Idomeneo is mentioned.

In the morning and early afternoon before our evening performances, Will Russell and I explored the city of Würzburg on foot. We walked around the inner city and eventually went up to the Marienberg Fortress. We walked along the ramparts and enjoyed spectacular views over the river and the city. Before the performance on the 11th June, we climbed the adjacent hill to visit the 'Käppele' (Wallfahrtskirche Mariä Heimsuchung). This Rococo-style church, consecrated in the year 1754, had an incredibly ornate interior and the views over Würzburg and the Marienberg Fortress were tremendous. 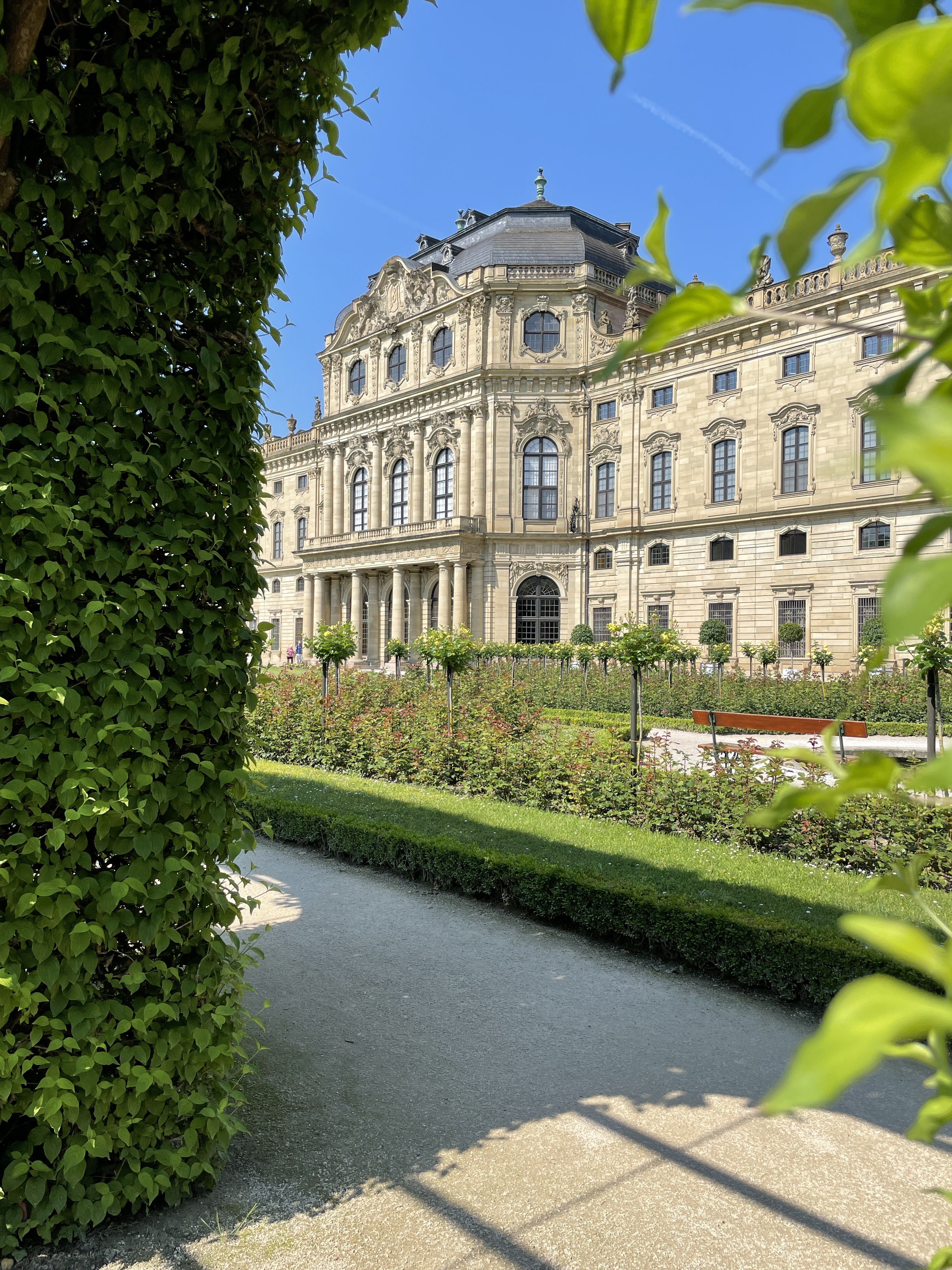 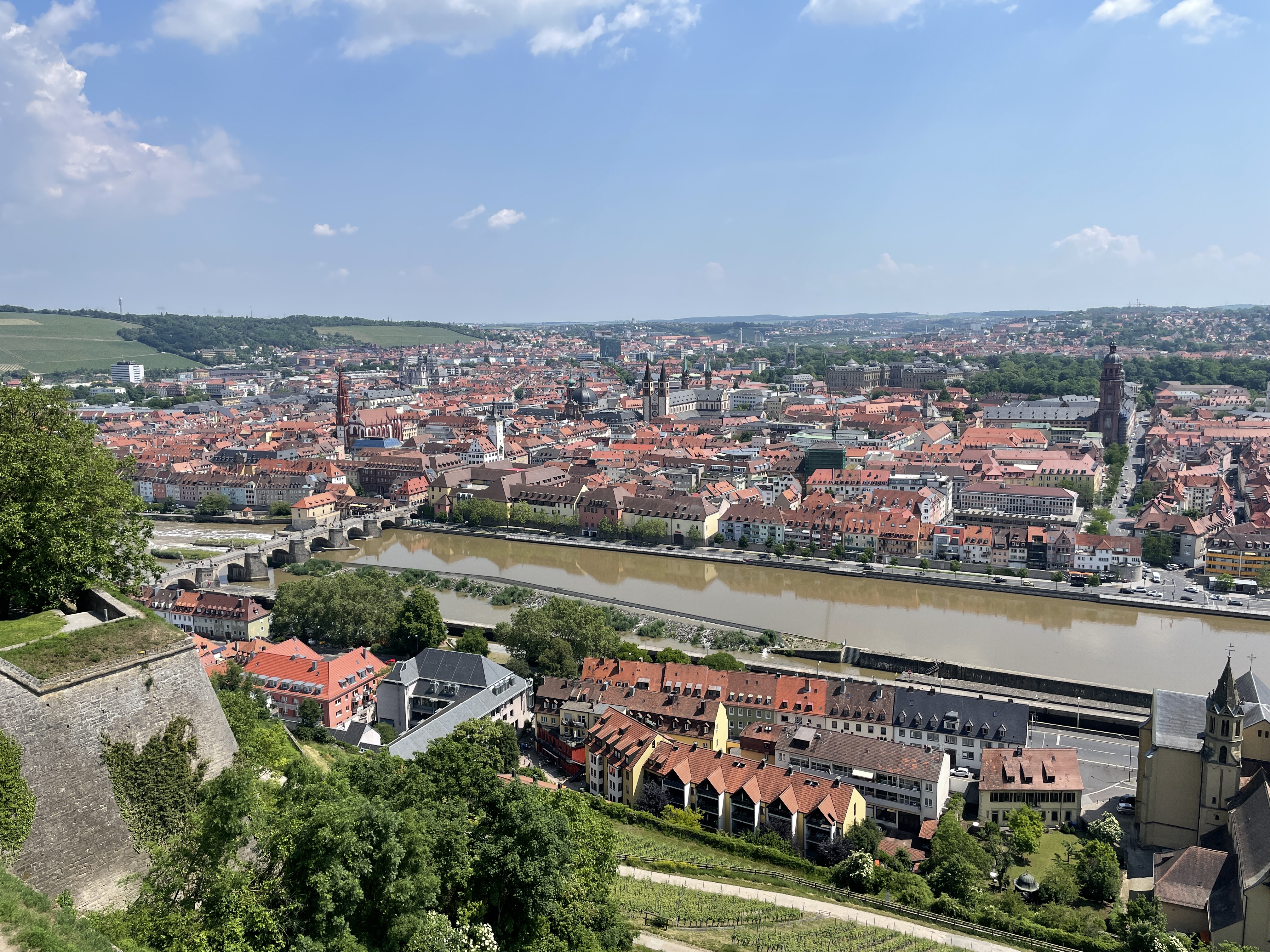 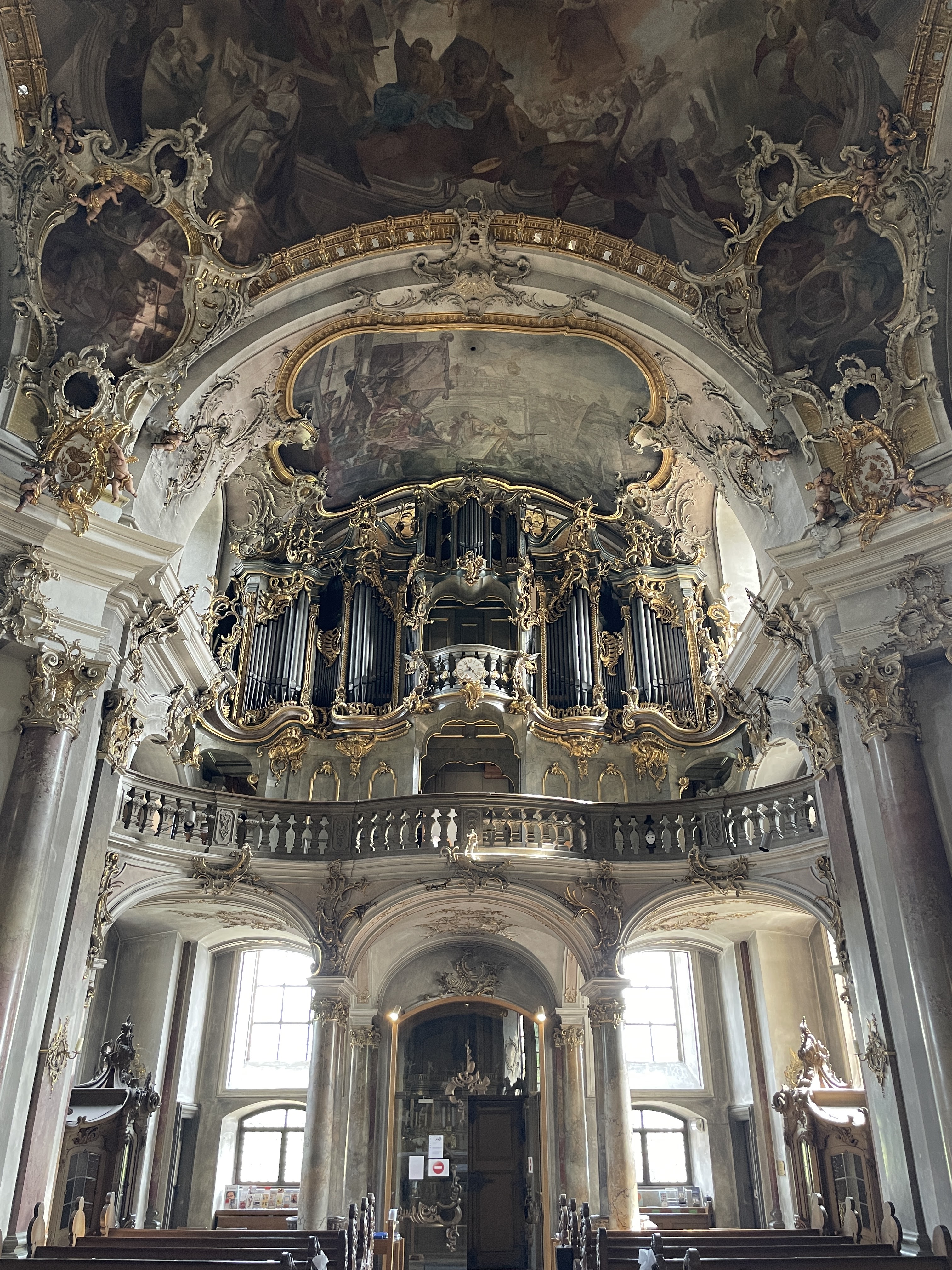 After the project, Will returned to the UK (with a 10-day quarantine). I will be playing with Les Talens Lyriques again later this month, so it was not worth me going home and coming back (with quarantines in two directions). As a result I have 10 days (including my birthday) to spend in Puteaux, though this time I am free from quarantine. Later this month I will be playing first trumpet in Handel's Messiah with Les Talens Lyriques for a performance in Evian, after which I will return to the UK to quarantine for 10 days.
Classical, France, Germany, Instrument Making, Les Talens Lyriques, Mozart, Natural Trumpet, Tour
Russell Gilmour