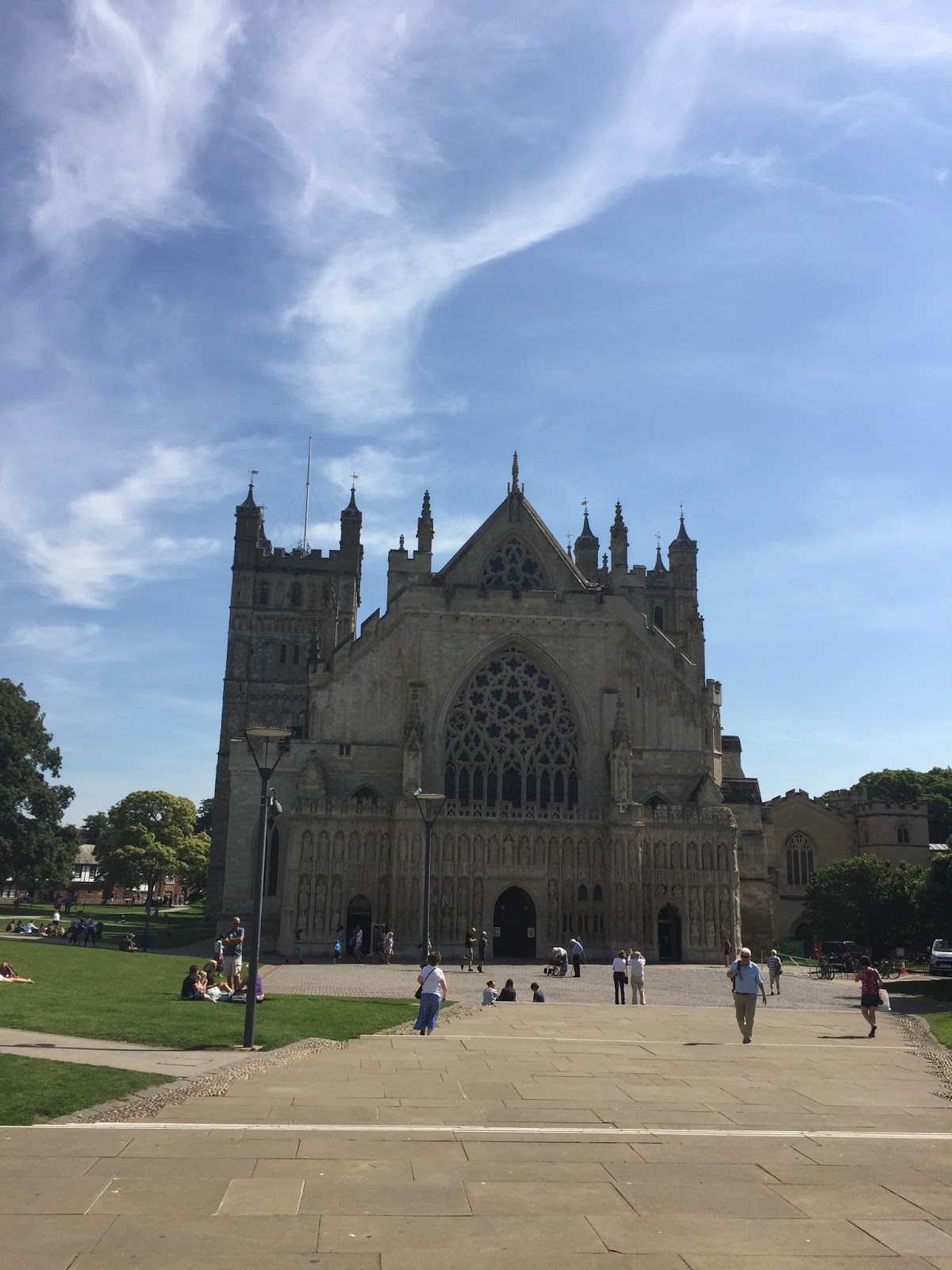 This is the third large-scale performance given in Exeter Cathedral by Blackdowns Early Music Projects. Their previous concerts in 2013 and 2015 explored repertoire from Vienna and Salzburg, with a focus on the music of Heinrich Ignaz Franz Biber.

This current project, Grand Baroque III, explored music by composers with a connection to Bach’s predecessors at the Thomasschule in Leipzig. Kuhnau and Schelle were direct predecessors there, and the inclusion of music by Pachelbel, Vierdanck and Zelenka was well-explained in the programme notes, via links to the Bach family, Heinrich Schütz and Bach’s work in Dresden. 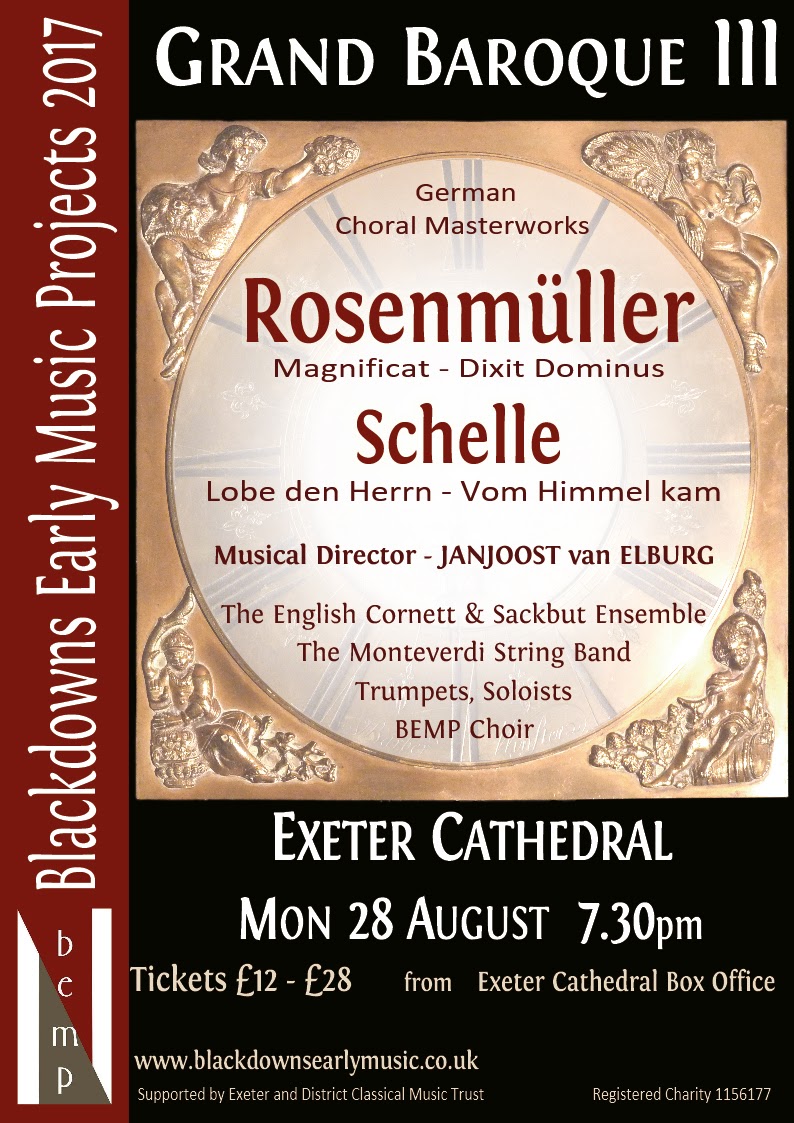 Clearly a lot of work went into organising this spectacular event. Catherine and Geoffrey Bass are the organisers of Blackdowns Early Music Projects. They worked closely with the leaders of each section of the orchestra, taking and making suggestions of suitable instrumental repertoire to form a cohesive and compelling programme.

Zelenka - Fanfaren No. 2
Rosenmüller - Magnificat à 18
Pachelbel - Ciacona in F minor
Schelle - Komm Jesu komm
Schelle - Vom Himmel kam der Engel Schar à 18
INTERVAL
Kuhnau - Praeludium (Wenn ihr fröhlich seid an euren Festen)
Rosenmüller - Sonata Decima à 5
Rosenmüller - Dixit Dominus à 18
Johann Vierdanck - Sonata No. 31
Schelle - Lobe den Herrn meine Seele à 26
Geoffrey and I worked to find a fanfare to open the programme that would fulfil the brief of being interesting art music, while having a clear division between clarino and principalé trumpet writing. It proved difficult to find a suitable German work, other than by anonymous composers, that would fit this brief so we had to extend the search to Dresden’s library, and the ‘Six Fanfares’ (1722) of the Bohemian-born, though Dresden-residing, composer Jan Dismas Zelenka. We performed the ‘Fanfare No.2’ for four trumpets and timpani. The beautifully-written source of these cavalry fanfares was unfortunately destroyed in Prague during the Second World War, though fortunately a copy of the score and parts has survived at the Sächsische Staatsbibliothek in Dresden (2358/N1).

The concert began with this fanfare, performed facing forward with two trumpets on either side of the timpani from the dais at Exeter Cathedral. I really enjoyed performing this fanfare - with all of the repeats it is an extreme challenge for the top two trumpets (at least). We received so many compliments from our colleagues for playing it with delicacy and refinement. These fanfares really are fantastic pieces of art music, but with their extremity I wouldn’t like to play all six pieces one after the other!


The ensemble featured a collection of some of the top period-instrument groups and players in Britain. The integration of groups such as the English Cornett and Sackbutt Ensemble and the Monteverdi string band had echoes of the differing groups of municipal musicians like the Stadtpfeiffer and Kunstgeiger who had their own duties to fulfil but would frequently come together for various appearances with different ensembles in Leipzig. 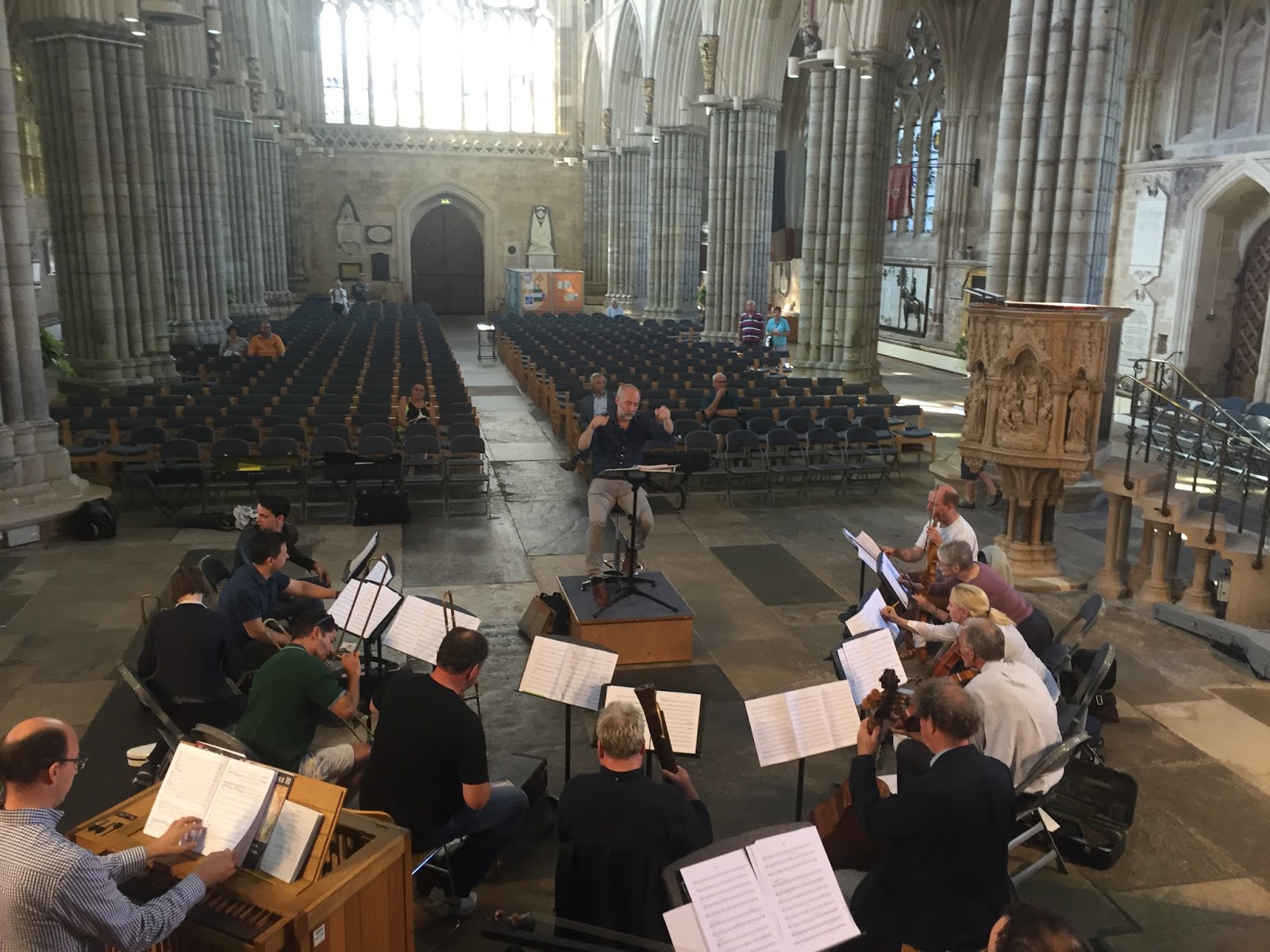 Steven Devine performed a memorable and captivating organ solo in the first half of the concert, a ‘Ciaconna’ in F minor by Pachelbel and he held the captivated attention of the whole cathedral.

The Monteverdi String Band were equally brilliant and they performed the stunning ‘Sonata Decima à 5’ by Rosenmüller. It was fantastic to hear the playing of the alto (Wendi Webber (née Kelly)) and tenor (David Brooker) violas in the mix of the wonderful string sounds. It was fantastic to open the second half of the concert with The Monteverdi String Band playing Kuhnau’s ‘Praeludium’. It began with layered fugal entries from Oliver Webber (violin) and Theresa Caudle (violin), the two violas and Peter McCarthy on the 8-foot violone, and it continued with each trumpet entering, at intervals of one bar, with overlapping fanfare figures.
The project was musically directed by the fantastic conductor JanJoost van Elburg. He brought all of the different elements together excellently and he had an in-depth knowledge of this uncommonly-performed music. He managed to get the best results out of the choir, while calmly and professionally leading some of the UK’s top period instrument experts in the orchestra. He certainly had a difficult job in juggling all of these duties but he had clearly done his homework. He was able to offer helpful cues, and he encouraged both the professional and amateur musicians with fantastic ideas in the rehearsal and very helpful gestures in the performance.

This project highlighted the fact that there are so many more fantastic pieces of music that exist that just do not get performed often enough. I have enjoyed performing music by Schelle and Kuhnau before with Solomon’s Knot - in particular in the Leipzig Bach Festival and at St. John’s Smith Square - but music by these composers seems not to come up often enough elsewhere. It is truly excellent music and it can be easily integrated into programmes to become accessible to audiences with the clear link with the Thomaskirche and its connection to Bach.

The ensemble performed at A=466Hz, which is known as ‘high pitch’. This is a whole tone higher than the now-ubiquitous A=415Hz. A=415Hz is now popular as a pitch standard for performing baroque music in modern times, as it is conveniently a semitone below modern pitch (A=440Hz)*. It may well have been used during the baroque period in some places, though crucially not everywhere.

To achieve the A=466Hz pitch standard, the string players tune their strings a tone higher, cornetto players select the A=466Hz (often more historically-accurate replicas of) cornetto and cornettino and the sackbutt players use a different system of positions. The continuo section (two chamber organs and a dulcian) choose instruments at A=466Hz [this can be achieved on some chamber organs by way of a moveable keyboard and careful retuning].

With the ensemble sounding at high pitch, the trumpet players are able to play on (replicas of) the most prevalent (museum-extant) types of natural trumpet - pitched in D. [*Although the standard pitch of Nuremberg trumpets tended to be ‘in D’ at the pitch of A=c.421Hz (not A=415Hz).] These trumpets could be regarded as a ‘C trumpet’ at A=466Hz or a ‘D trumpet’ at A=415Hz. This means that we can play on un-crooked instruments when others are playing at A=466Hz. Since German trumpet parts are predominantly notated in the harmonic series in the written (not necessarily sounding) key of C major, transposition is not an issue as we simply alter the tube length and find the new tonic on the instrument.

Performing at A=466Hz worked exceptionally well for this performance and it is definitely to be encouraged in projects of other similar repertoire. There is plenty more we still have to learn about regional pitch standards and the use of two pitch standards simultaneously in the same orchestra. We know that there was a difference of in pitch between Chorton (also known as Cornet-ton) and Cammerton in Leipzig at this time. Kuhnau wrote “I eliminated the use of Cornet-ton and introduced Cammerton, which is a second or a minor third lower, depending on which is most convenient.” (1717, published by Mattheson in 1722). Kuhnau also wrote instructions for performing his cantata ‘Daran erkennen wir, daß wir in ihm verbleiben’:

“1) N.B. this piece is in Chorton for the violins, voices and continuo in B-flat.
2) The trumpets are written in C to make everything work properly, so they should add a crook at the mouthpiece so they sound a tone lower, that is, in Cammerton.
3) The hautboys and bassoon should be in Cammerton, and their parts are already written out transposed up a step, so in this way everything will be in accord.”

This illustrates that Kuhnau both “eliminated” and also utilised Chorton. He must have needed it. The instructions may have been necessary to facilitate the hautboys, often at the low-pitch associated with French instruments. The presence of these instructions shows that they may not have been indicative of the normal conventions. Clearly, there is a lot to know in this area and it all makes for fascinating reading. I feel slightly overwhelmed by how much there is to know, but I think from what I have learnt so far, one should not expect or strive towards a modern consistency. I appreciate that pragmatism and audience interest are crucial for modern performances - and I totally support the use of one pitch standard in one concert, as I am sure that working musicians would have done in the 17th and 18th centuries.

I would like to thank all involved at Blackdowns Early Music Projects for this stimulating and thought-provoking concert.

"GRAND BAROQUE lll features the choral music of Johann Rosenmüller and Johann Schelle, both well known in C17th Leipzig as highly accomplished musicians and composers. Their names were well known across Europe, better even than one of Schelle’s successors as Kantor in Leipzig’s famous Thomaskirche, one J S Bach. While the music of JSB now dominates much of the baroque repertoire, that of Rosenmüller & Schelle is equally inventive and thrilling.