After a successful concert in the Wratislavia Cantans Festival in Wrocław, after a break of a week - the group travelled to the Island of Usedom in the North East of Germany, near the Polish border on the Baltic coast.

I flew from London Heathrow to Berlin Tegel Airport, with my colleague Stephen Gilbey. We took a train from the Berlin Hauptbahnhof to Anklam station on mainland Germany, where we were met by a driver from the Usedomer Music Festival who drove us over the bridge onto the island. We were then driven directly to our accommodation in Heringsdorf, enjoying beautiful scenery on the way. We met the rest of the group at the villa, called 'Villa Ikarus'.

We had an hour before the rehearsal, but that was not enough time for us to find a shop to get something to eat. The centre of the town is largely pedestrianised and we hadn't seen much nearby on our drive in. We went to the rehearsal in the Evangelische Kirche in Krummin. It was a beautiful old church, set slightly higher than the quiet road and surrounded by a picturesque graveyard with old chestnut trees that were beginning to show the first signs of autumn. The church itself was evidently old but it was beautifully simple inside. The decor inside was basic, with no plaster on the walls and there were holes in and around some of the windows, which made the temperature quite changeable. The organ had just arrived by car from Wrocław, and it needed time to be tuned and to settle. 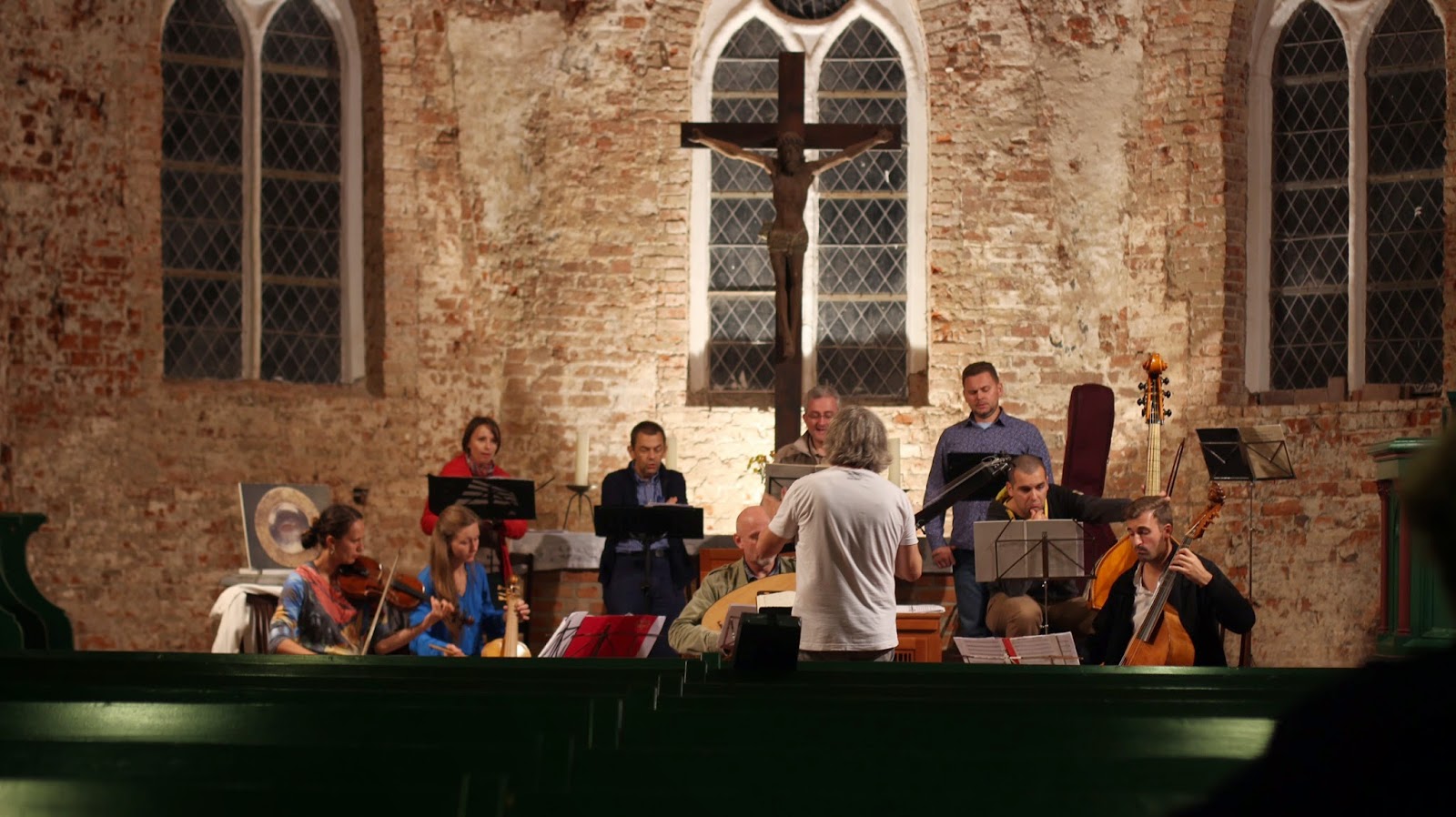 I noticed that the fishing three-legged symbol on the altar was remarkably similar to the Isle of Man's flag: 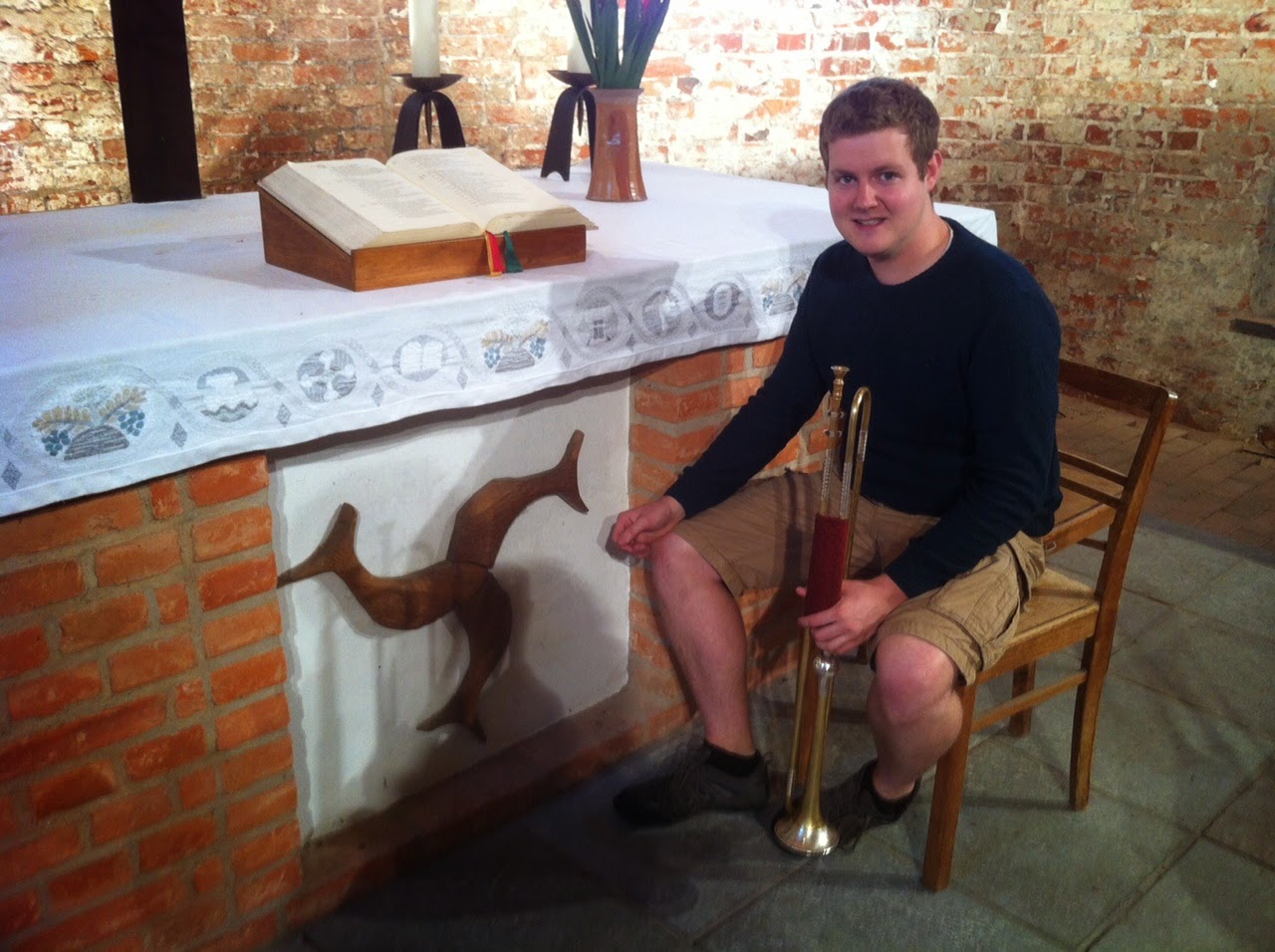 We rehearsed the programme which was similar to the Gorczycki programme from the Wratislavia Cantans Festival. This time we played Laetatus Sum instead of Litaniae de Providentia Divina and there were a few changes of personnel, so it was definitely worth rehearsing everything in full. The rehearsal was enjoyable.
After the rehearsal, we returned to the apartment in Heringsdorf. By the time we arrived it was about 10pm and we were certainly ready to eat. Steve and myself explored the town and stopped for a beer in the town's brewery. The dunkel beer was excellent, but sadly their kitchen was closed. The search for food continued for some time, and in a last-ditch attempt we went to a hotel bar (which admittedly looked closed). After unintentionally scaring the barmaid (we had inadvertently entered the bar too quietly), we ordered pork medallions with a chanterelle mushroom sauce. It was fantastic food and we were relieved to finally eat.
Next morning, we had a free morning to explore the town. We went to the pier in Heringsdorf. After a wander up and down the pier, I took my shoes and socks off and paddled in the surprisingly warm Baltic sea. We had a leisurely day and I explained some of the finer points of photography to Steve, who had become interested in my DSLR. I became the model in his photo, in this case standing next to a fishing boat. He used manual settings and manual focus on the f/1.4 50mm lens to capture this image. 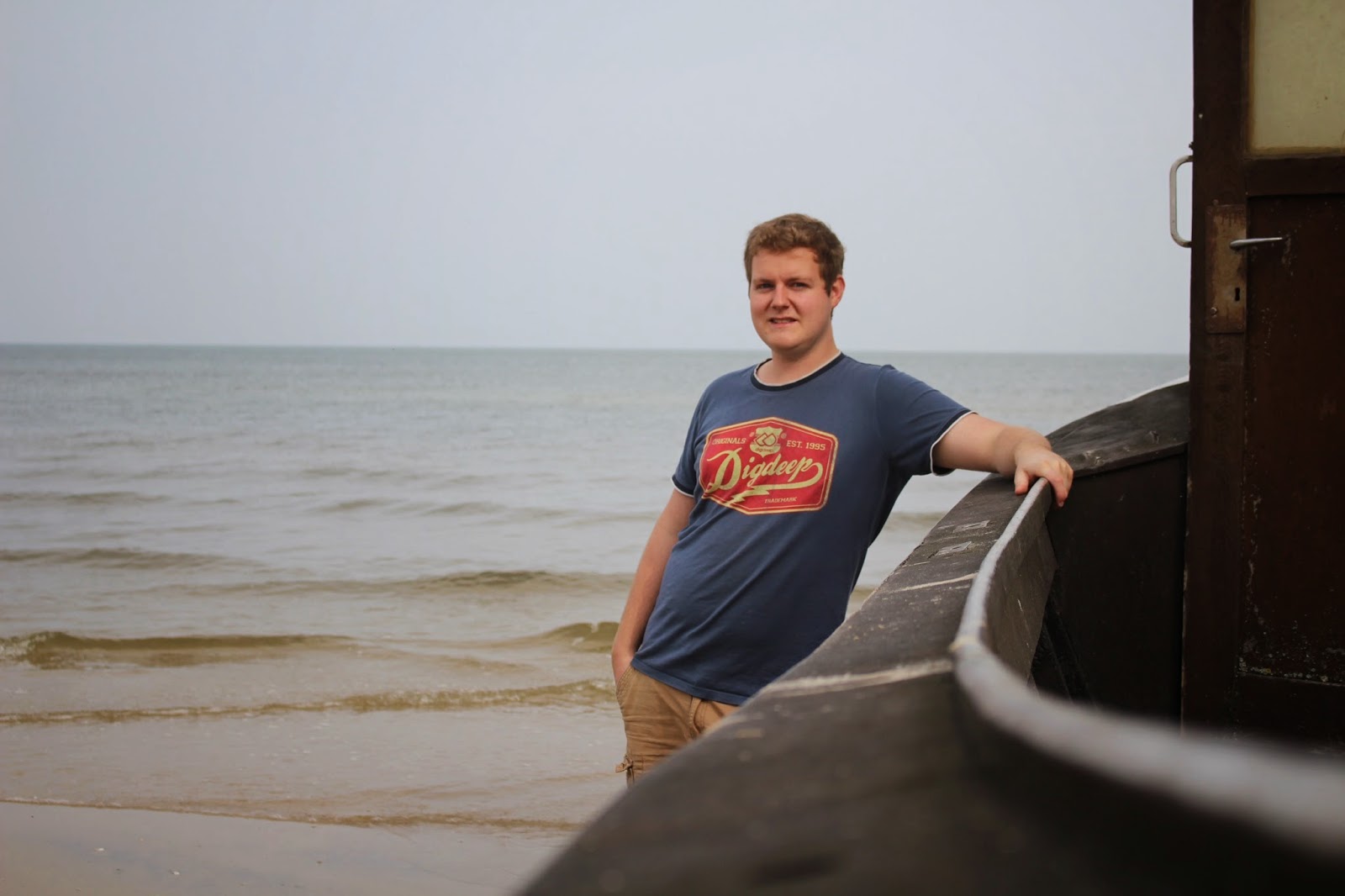 After a nice leisurely morning, we had work to do at 3pm. We met at the hotel for our lift to the rehearsal. The concert followed the rehearsal, after a break of an hour. The concert started at 7:30pm and there was time from 6:30pm to explore the small village. I took these photos in the evening light. 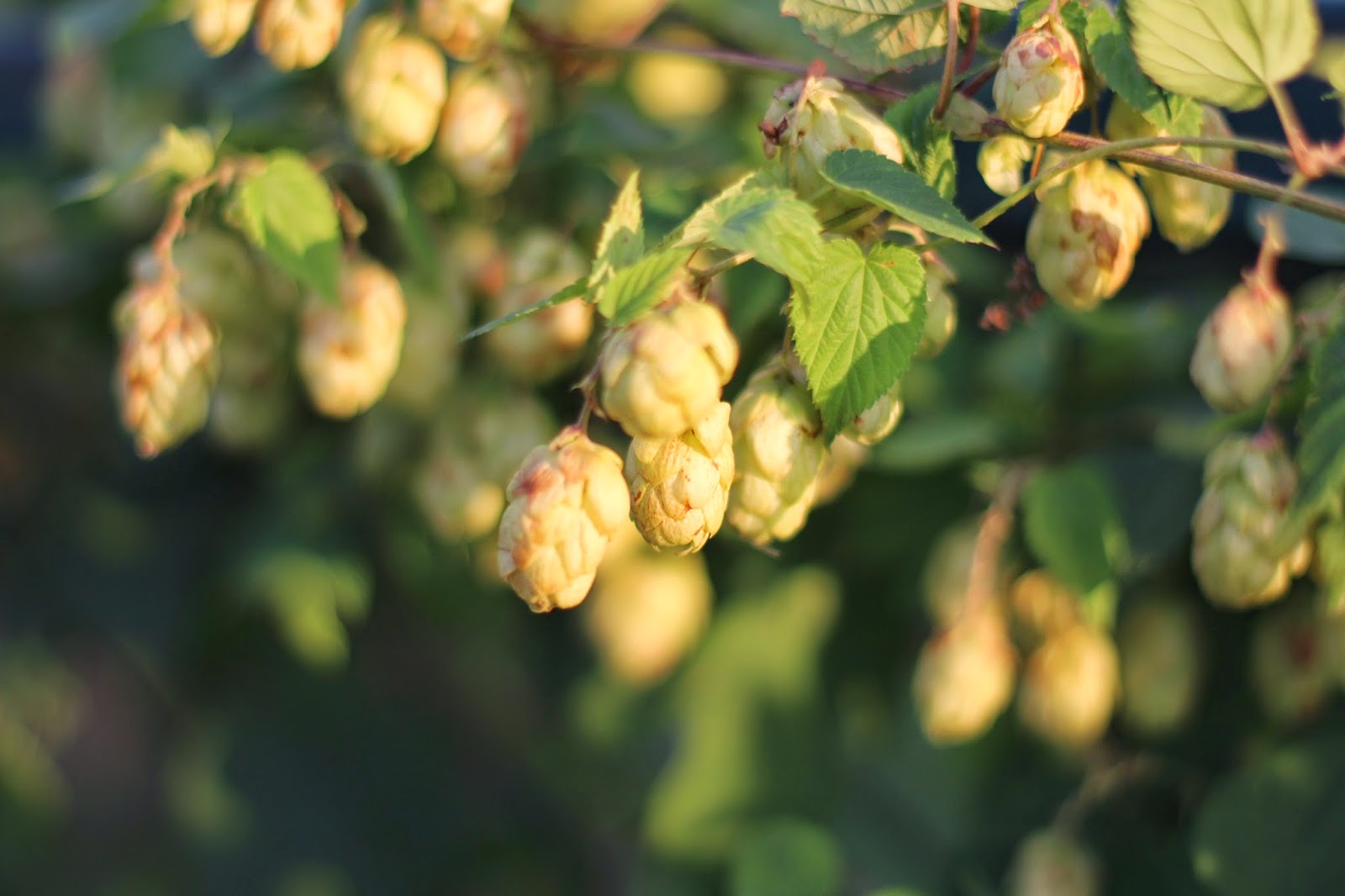 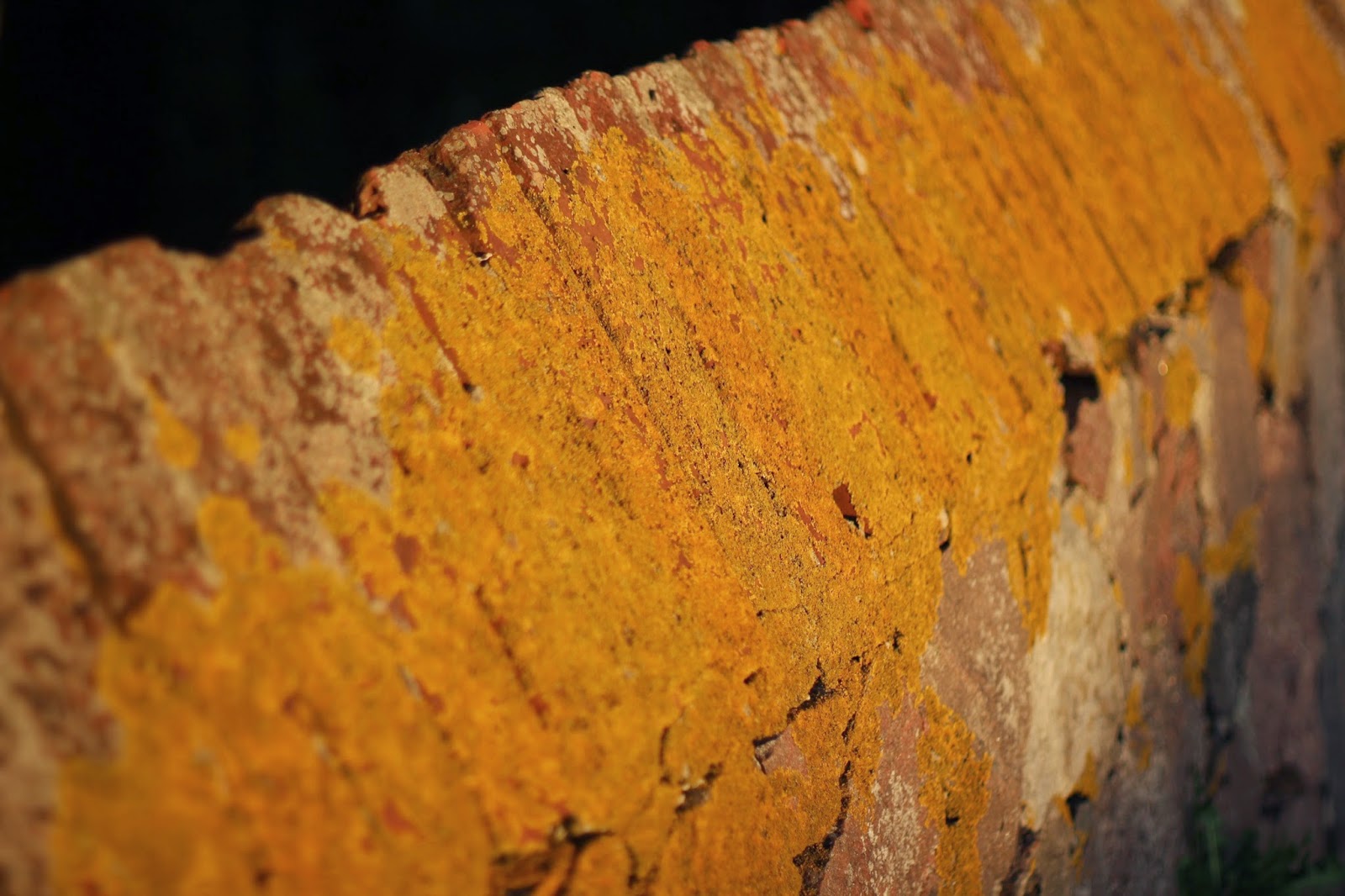 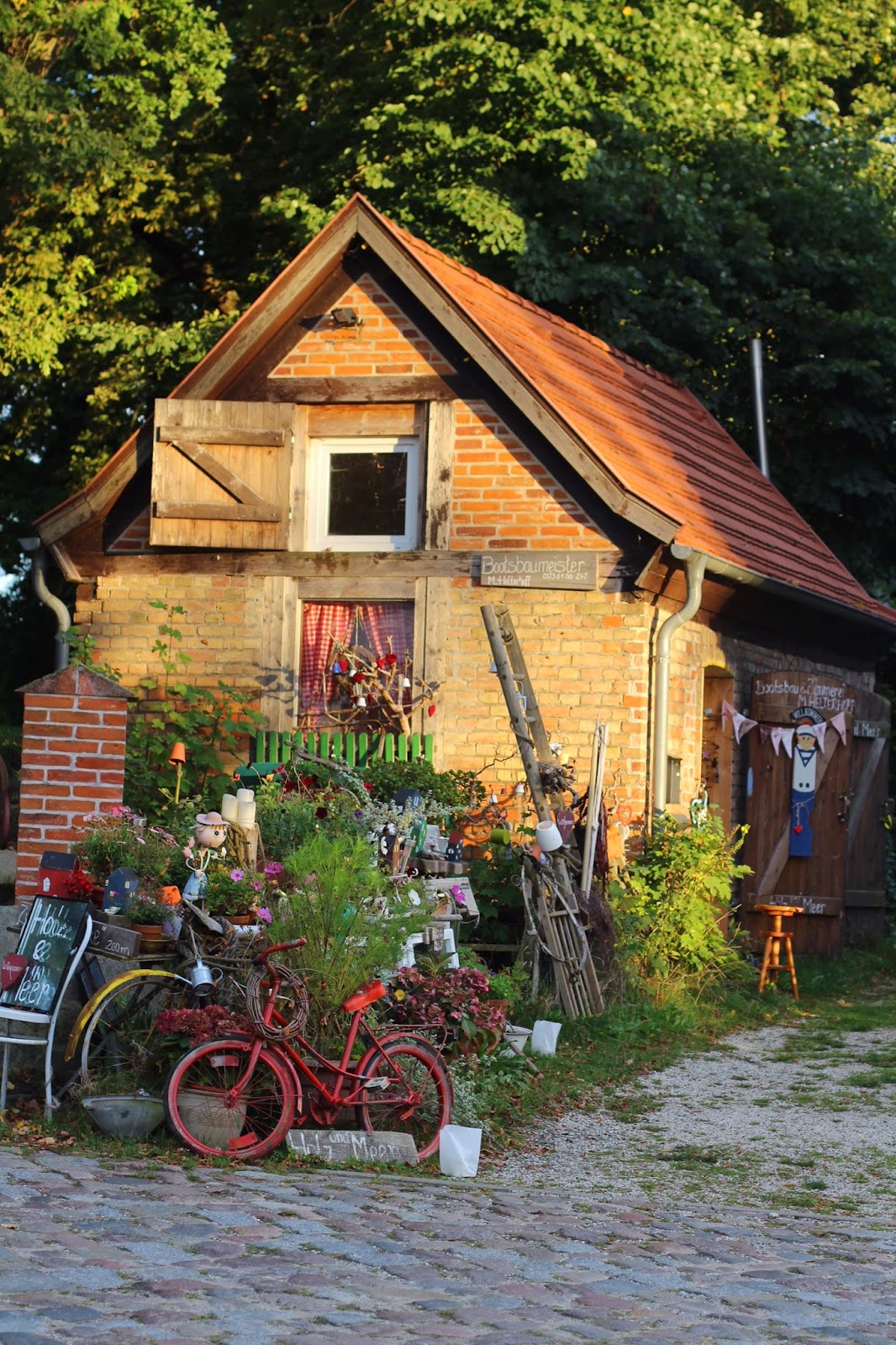 Just before the concert, I realised that the church was right next to the harbour - but on our walk we had walked in the opposite direction. I had a wander down to the water at the harbour side and enjoyed watching the sunset and witnessing the evening rise happening. There were fish breaching the surface of the water all over the place.
The concert was a great pleasure and afterwards we were invited to a reception in a 5 star hotel which was 4km away from our accommodation. We didnt know about the invitation at this point, so many of us got changed back into our casual clothes (myself in shorts) and got into a minibus. We arrived at the very posh hotel, and I wished I had stayed in my concert clothes. There were speeches and very tasty nibbles and drinks and it was an enjoyable evening. Upon our return to Villa Ikarus, the partying continued as the Polish members of the orchestra celebrated their country's victory in the European Handball championships - and, of course, a successful concert.
Steve and I left the villa at 6am the following morning, in order to catch the first direct train to Berlin.
| Concert, Germany, Gorczycki, Poland, Tour, Touring, Wrocław Baroque Orchestra
Archive...