Saturday, 11 Nov 2017, 19:30
Incredibly, it has been eight years since I last visited Edinburgh. Back in July 2009, I visited the University of Edinburgh, the Royal Conservatoire of Scotland (Glasgow) and the Musical Instrument Museums Edinburgh (located at the Reid Concert Hall and St Cecilia's Hall). I visited these places as part of the ‘BRaSS’ (Brass Research and Scholarship in Scotland) Conference and spent much of the week with the instrument maker, collector and wonderful gentleman: Frank Tomes. I often think of the great time we had on that trip; many of the trivial details have faded but the ideas, instruments and personalities remain very clear in my memory. I particularly remember departing Edinburgh Waverley station with a heavy heart, resolving to return to Edinburgh as soon as possible.

Many things have changed since 2009: Frank Tomes’ collection now permanently resides at the Musical Instrument Museums in Edinburgh, since Frank’s death in 2011. I am no longer a (modern trumpet) student (of John Miller’s) at the Royal Northern College of Music, or even at the Royal College of Music for that matter. I have since sustained a living as a freelance musician, completed three degrees, started a trumpet-making apprenticeship, learnt to engrave on sheet brass, bought a house, got engaged and so on - you get the picture. In this time, I unfortunately managed to neglect the resolution I made in 2009 to return to Edinburgh as soon as possible.

So it was with particular pleasure that I was asked to perform with the Dunedin Consort in Edinburgh, under the direction of the John Butt. The orchestra held a ‘Black Tie Gala Dinner’ on Saturday 11th of November 2017 at Mansfield Traquair - which is situated on the eastern edge of Edinburgh’s New Town. At 19:20 I sounded a fanfare (the ‘Toccata’ from Monteverdi’s L’Orfeo), during which Mansfield Traquair’s dividing curtains were parted, punctuating the move between drinks and dinner, and revealing a fine scene of historic murals, elegant lighting and beautifully-set tables. 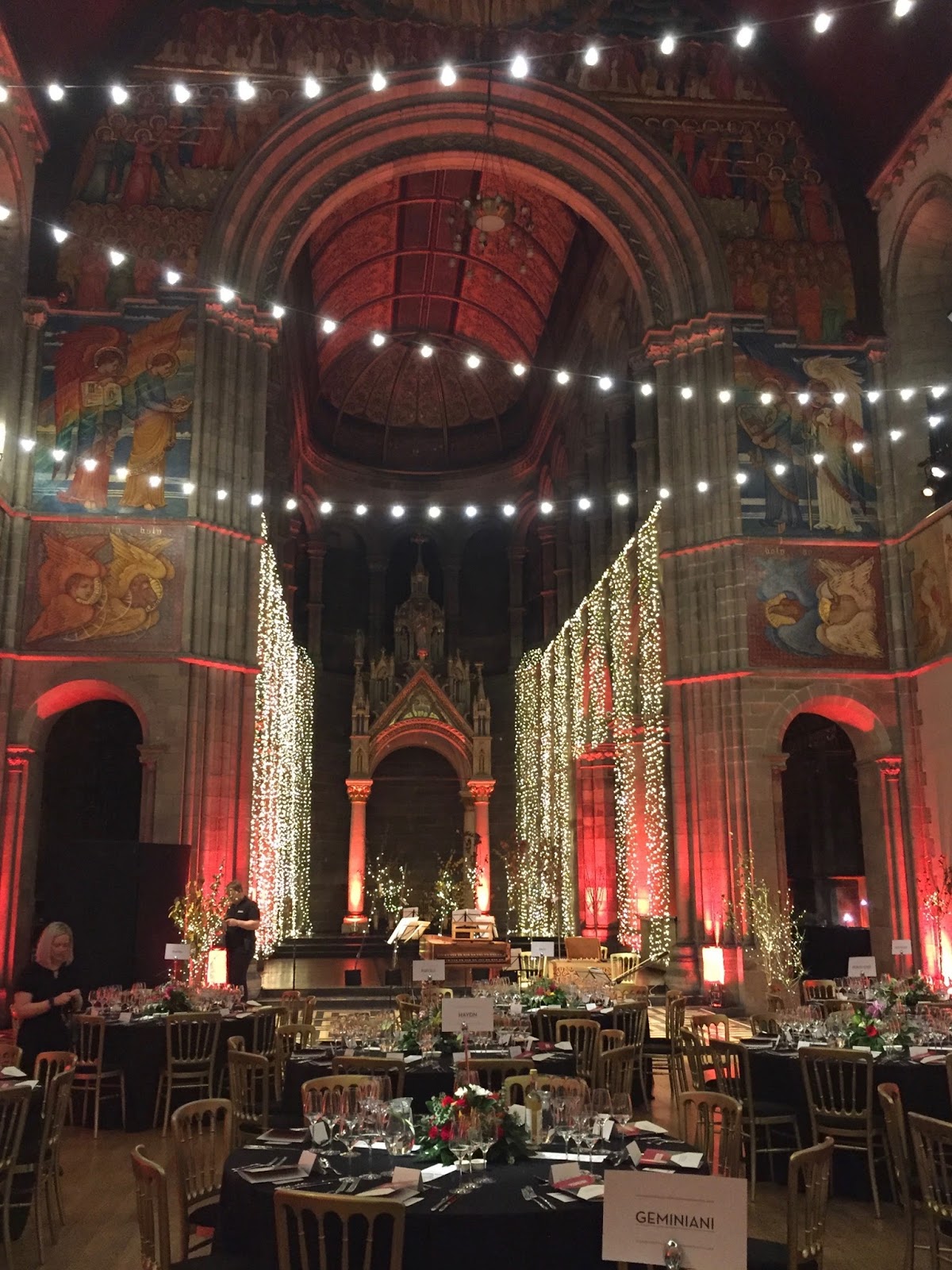 I later searched online and read about the venue and Phoebe Traquair:

“Inspired and visionary woman of her time, Phoebe Anna Traquair spent eight years (1893 - 1901) of her life creating the herculean works which earned Mansfield Traquair the title of “Edinburgh’s Sistine Chapel”. Her vivid, striking and truly beautiful murals interpret religious scenes, inspired by Blake and Renaissance, and reflect her status as an eminent figure in the Arts and Crafts movement.”

At 19:30 the Dunedin Consort took to the stage to perform the opening movement from Vivaldi’s ‘Gloria’ [RV 589]. The orchestra continued with ‘et in terra pax’ and ‘Domine Deus’ (with oboe obligato by Hannah McLaughlin) from the same work, followed by the ‘Largo’ from J. S. Bach’s ‘Concerto for Two Violins’ [BWV 1042], performed by Huw Daniel and Hilary Michael. Handel’s ‘Lascia Ch’io pianga’ (Rinaldo) was sung by Jessica Leary (Soprano), and Robert Davies (Bass) sang ‘How willing my paternal love’ (Samson). The final movement, ‘Cum Sancto Spiritu’, from Vivaldi’s ‘Gloria’ completed the musical performance for the evening. After an excellent dinner there was an address given by David Purdie and Kirsteen McCue and there followed a fundraising auction, held by Bonhams.

It was a great pleasure to play for John Butt. I have read several of his academic writings and it was a thrill to rehearse and perform with him. I gained an insight into how he links his immense knowledge with his skills as a performer and as a director and how he uses his ideas to enthuse the ensemble. It was fascinating. He was infectiously energetic and he lead the rehearsal with fast-paced precision, eloquence and wit - he displays all the qualities of an excellent teacher - with the addition of being immensely quotable and humorous. The most quotable phrase I can remember was when he said to the choir: “You must convey real emotion here. This is not exchanging cards at Christmas, this is going over in person when the cat dies.” His rehearsal style was brilliant and the orchestra achieved a lot in a short space of time.

I often (incorrectly) anticipate that musicians who have made such important contributions to academia will have exhaustive, perhaps draconian, rehearsal techniques. However in actuality, I was relieved to find that it is so often these people that understand that making music is intended to be ephemeral. Music-making is equally about the people and their reactions to each another as it is about the application of theory. In other words, HIP is as much about ‘now’ as it is ‘then’ and there are (and always have been) practicalities and constraints under which musicians must operate. I am now making it a priority to read more of John Butt’s book ‘Playing with History’.

It was a great thrill to play with the Dunedin Consort - they are certainly an exceptional ensemble. I must thank and congratulate them and their organisers (particularly Alfonso & Monica) for organising such excellent music within a very fine reception.

After an enjoyable evening, I retired to my accommodation and set an early alarm. It occurred to me that I had gone straight to Mansfield Traquair from the railway station upon arrival, and that I would be going to the railway station for an 10:51 train back home on Sunday. I wanted to explore Edinburgh more (I had already realised that the Musical Instrument Museums would be closed on Sunday) so I woke early (06:30) to walk along the Royal Mile (I had the place almost to myself) and see the sunrise from Edinburgh Castle’s Esplanade. 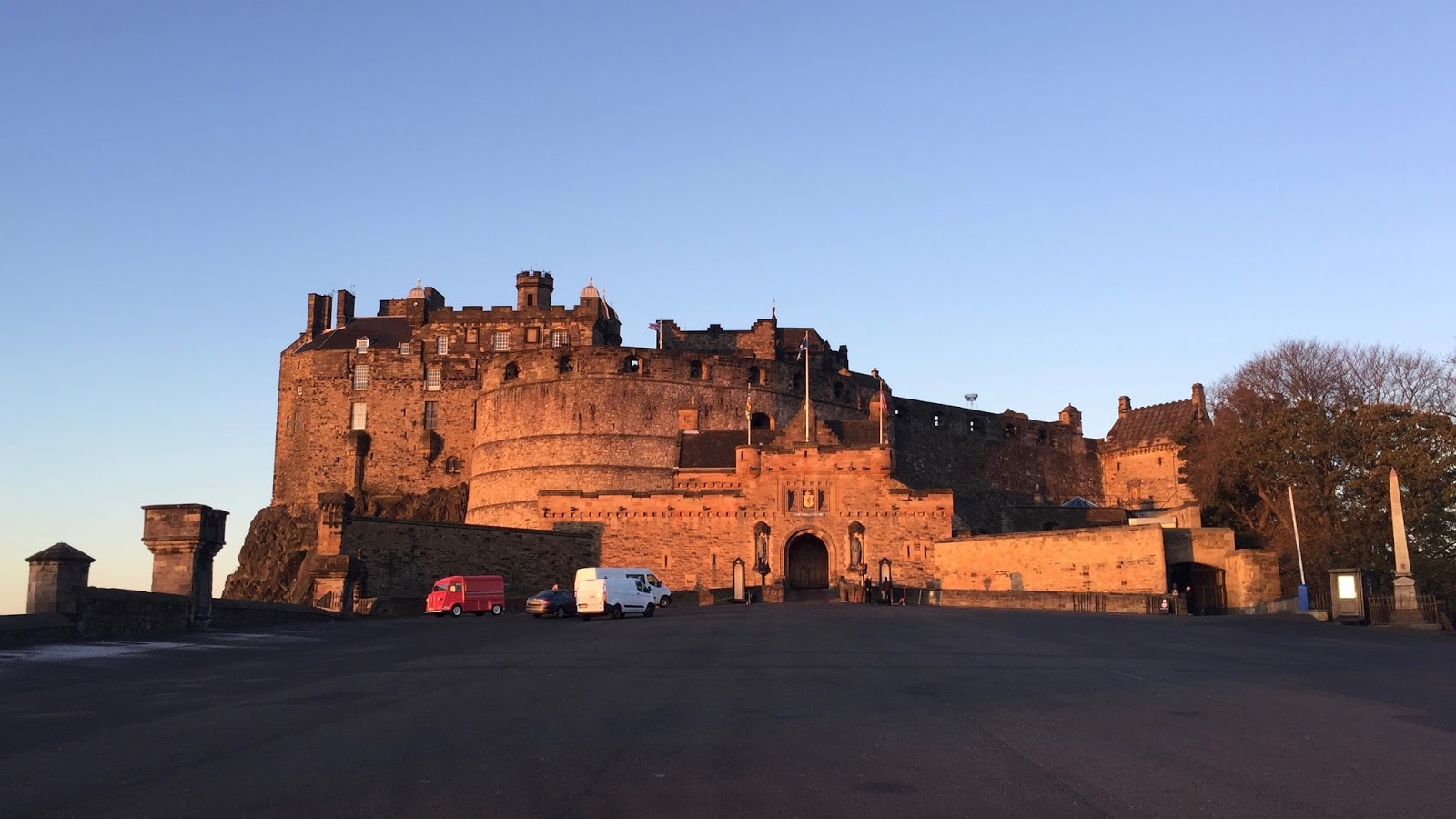 I enjoyed a leisurely morning exploring Edinburgh, on its slightly icy inclines, before heading back to Waverley station for the 10:51 to London Euston. Upon boarding the train I, again, resolved to return to Edinburgh as soon as possible.

A few moments later, an interesting coincidence: my former modern trumpet professor John Miller (with whom I had studied at the Royal Northern College of Music) joined the train, in the same compartment. As 11:00 struck, it occurred to me that John and I were two of perhaps only a handful of professional trumpet players who were not currently sounding the Last Post. 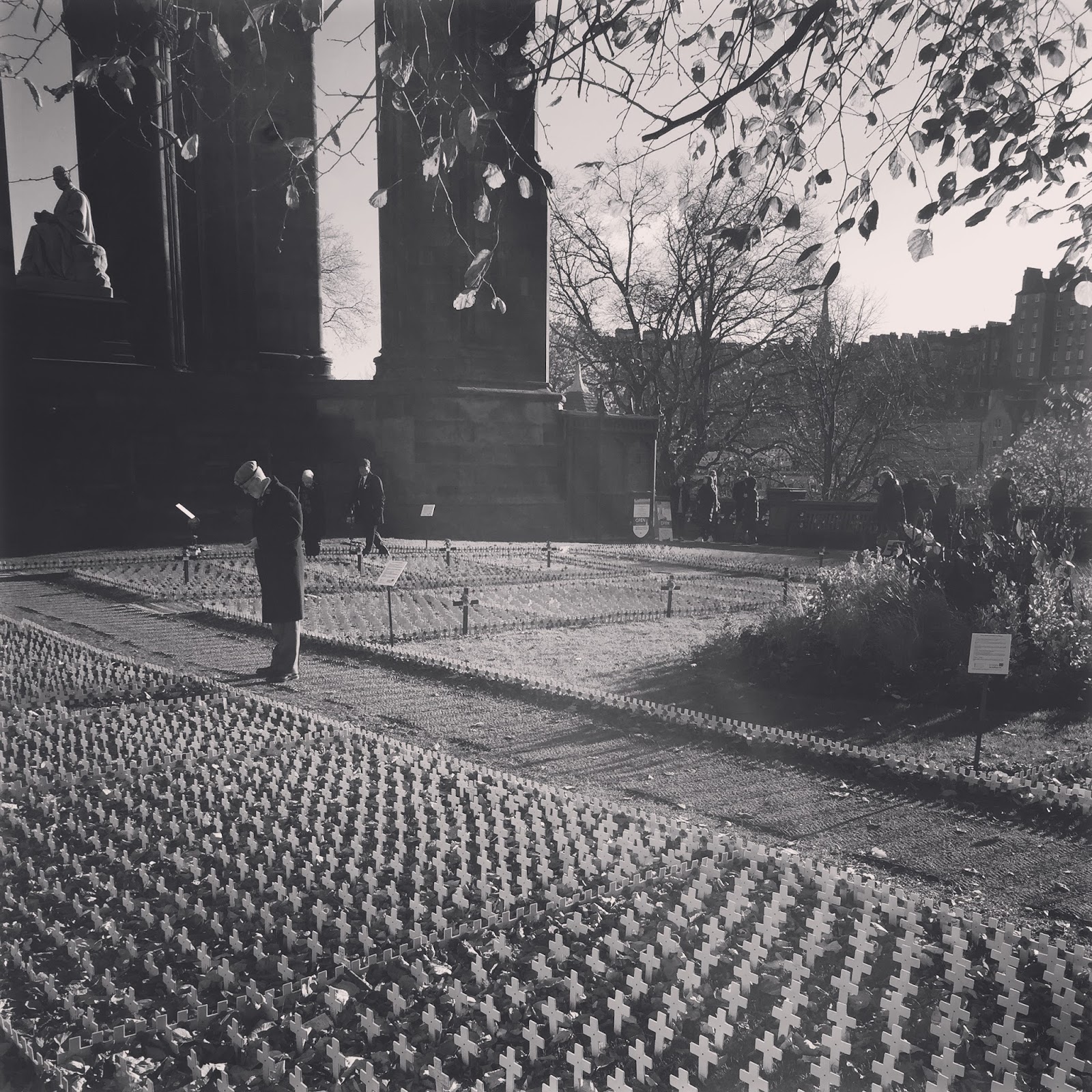 I enjoyed catching up with John while the beautiful autumnal and sunlit scenery passed the windows of the Virgin Pendolino (tilting train), running on the West Coast Main Line.
Concert, Natural Trumpet, Vivaldi
Russell Gilmour