Monday, 10 Jun 2019, 16:00
Handel’s Agrippina [HWV 6] was the focus for Christophe Rousset’s Les Talens Lyriques at the beginning of June 2019, with performances in the Klangvocal Festival in Dortmund on Saturday 8th June 2019 and in the Halle Händel Festspiele on Monday 10th June 2019.

Rehearsals began in Paris and the group worked to familiarise itself with this long (circa 4-hour) and intricate opera. The ensemble rehearsed at Fondation Lucien Paye, part of the Cité Internationale Universitaire de Paris. 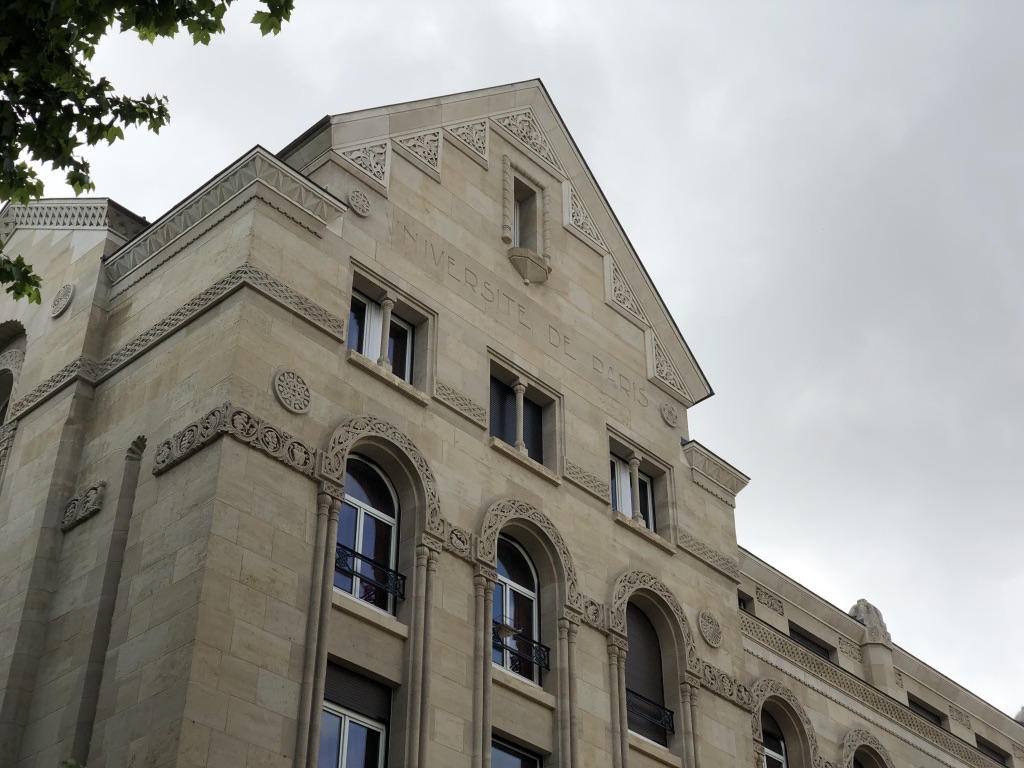 Despite extensive rain, it was great to be back in the French capital. Will Russell (2nd trumpet) and I explored the Parisian streets on foot; on the first day we walked around 34km, and about 28km on the second day there. There is certainly a lot to see when walking in Paris. One particular highlight was the area around Avenue Daumesnil in the 12th arrondissement where there was an artistic quarter that had been established in the arches of a railway viaduct. Le Viaduc des Arts was home to 58 different artisans including woodworkers, leatherworkers, jewellers, glass-blowers, flute-makers, piano-restorers, portrait-painters, printers and weavers. Each shop in the viaduct has its own individual aesthetic and it is clearly a chic and stylish space for these Parisian artists. 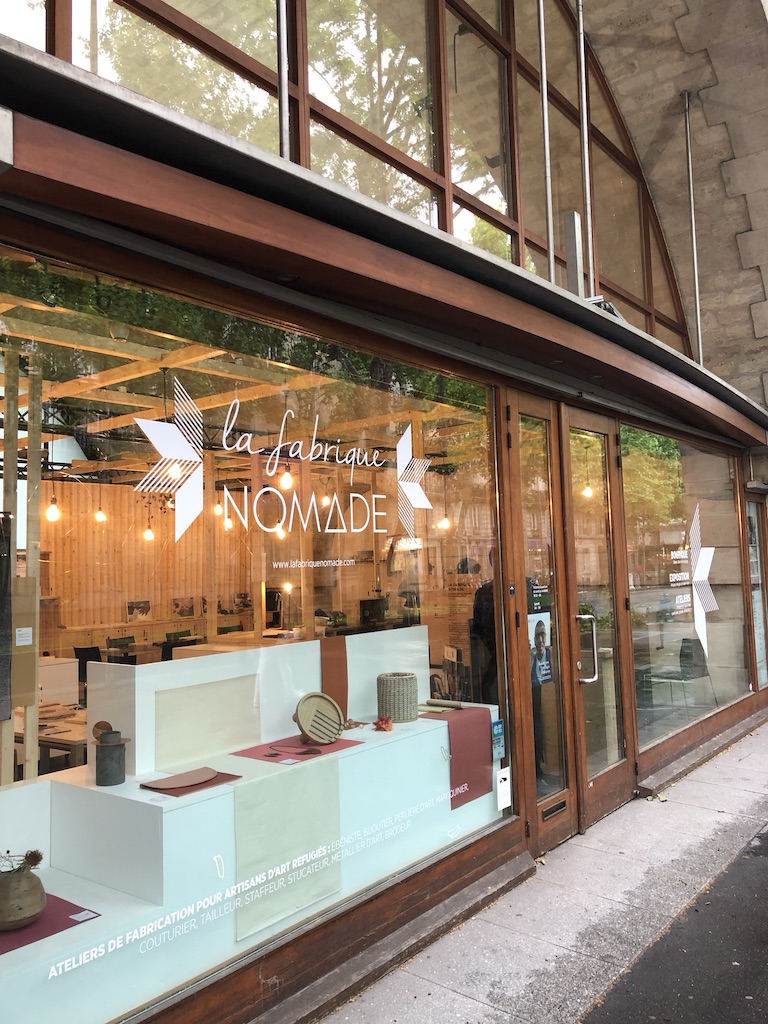 On the second day there was no rain, and Will and I had chance to walk from the hotel (du Pré) around the 4th arrondissement, observing the Seine and the recently fire-damaged Notre Dame cathedral. 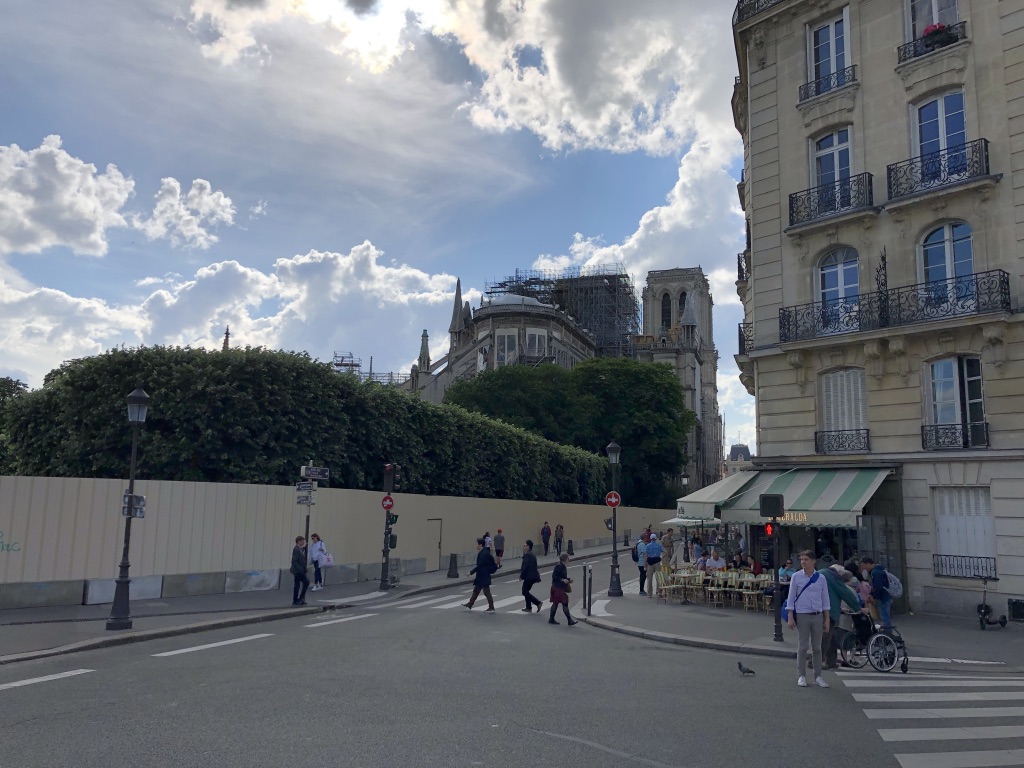 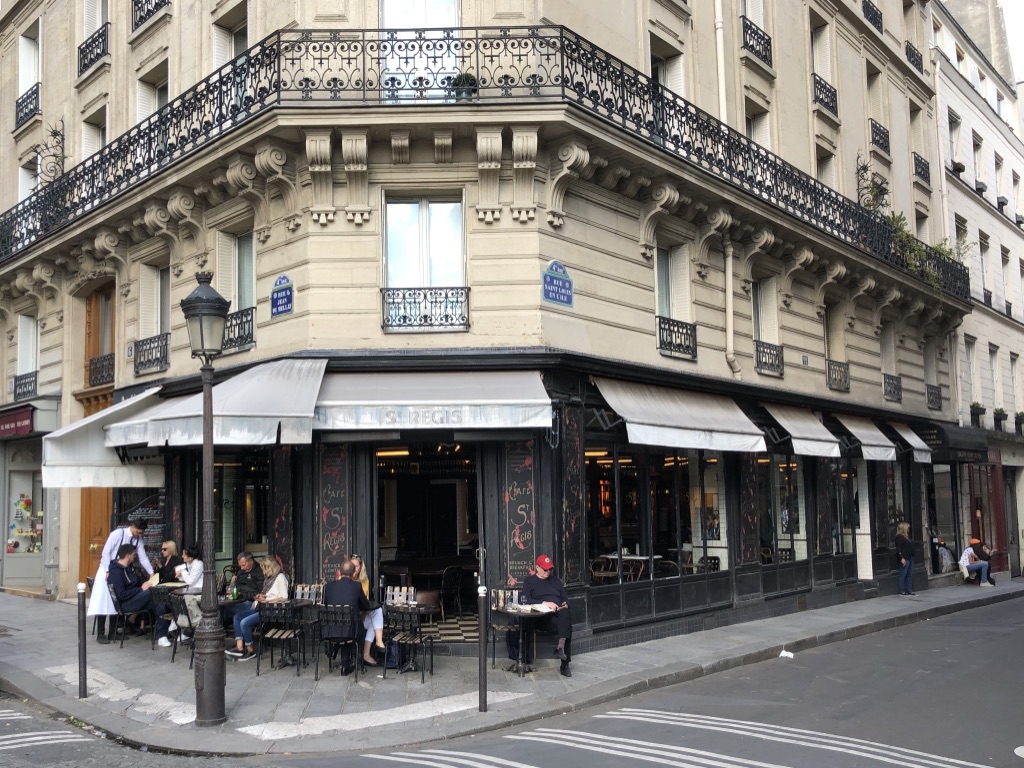 Each day, after all that walking, we returned to our favourite restaurant in Paris - the wonderful Colline d’Asie at the side of Montmartre - and enjoyed celebrating Will's birthday. To continue the celebration, we visited Chez Bouboule Pigalle on the way back to the hotel. This was a bar with an indoor boules court (or was it pétanque?) which was utilised by many. On one side of the sandy court there was a comprehensive net to protect the patrons from friendly fire and all along the other side, there was no net and there were many glazed doors and windows exposed. The players, despite varying levels of sobriety on show that evening, were very accurate and both net and fenetre remained untouched and we saw some outstanding contests. 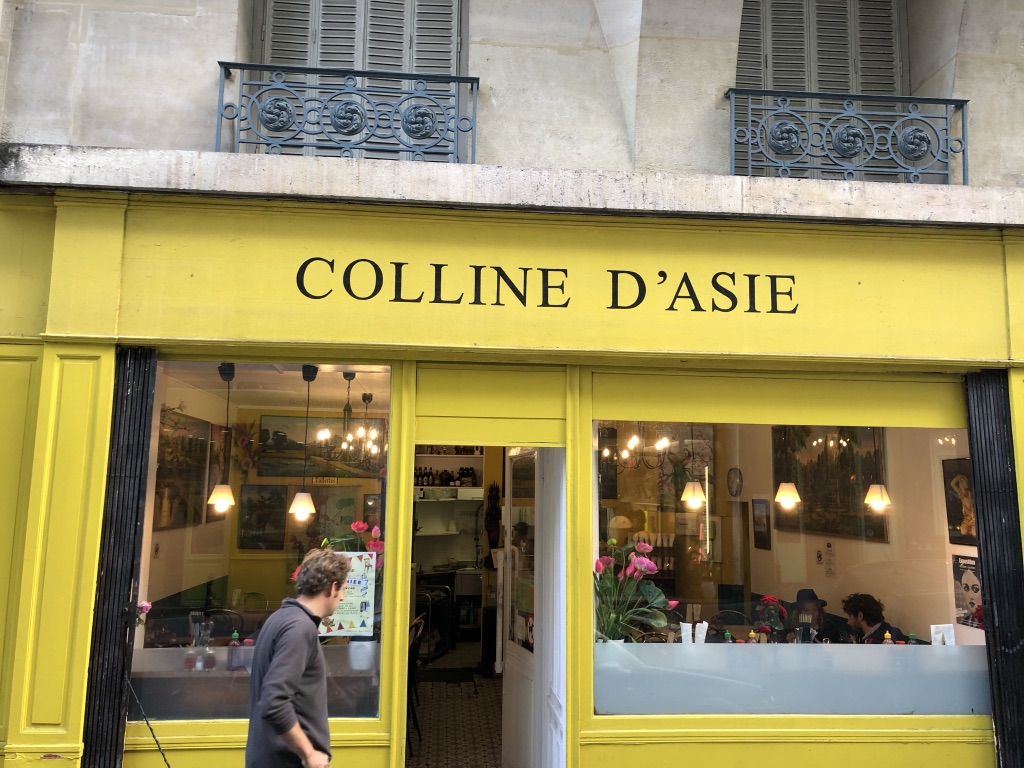 After a few enjoyable days rehearsing, the group rendezvoused (as did a flash-mob marching Samba band) at Gare du Nord, to travel on the Thalys to Dortmund. Will and I had initially travelled from London St. Pancras to Paris on the Eurostar and now we were travelling on another high-speed train towards Dortmund. Both the Eurostar and the Thalys were excellent, convenient and environmentally friendly modes of transport. [The rest of our trip to Halle and eventually Berlin Tegel would be by coach, with only one flight to transport us back to London Heathrow]. 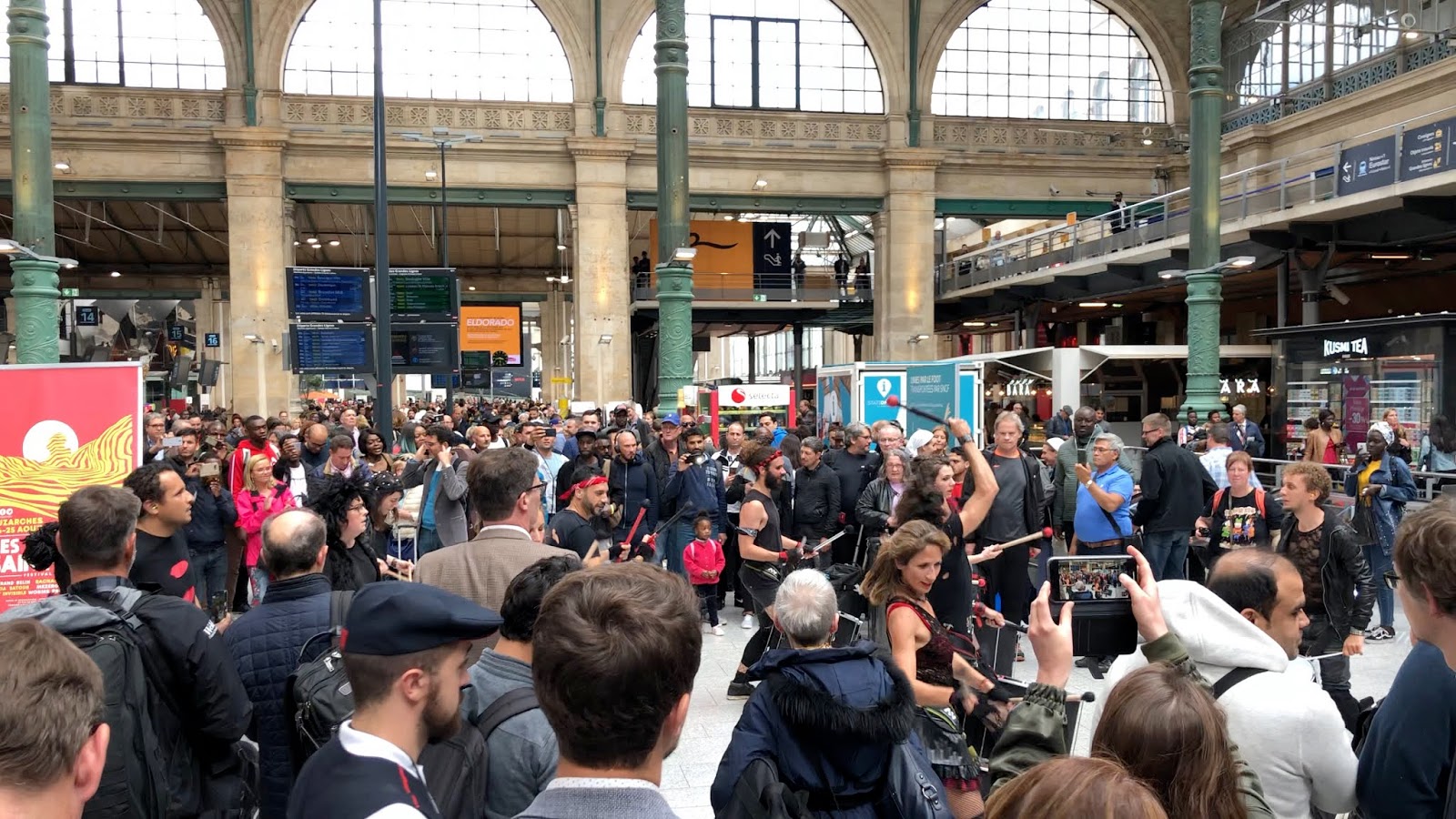 The rehearsal and performance in Dortmund took place at the Orchesterzentrum NRW (Nordrhein-Westfalen) on Brückstraße. The venue had a large stage and a modest audience capacity and it was filled to capacity during the performance.


Christophe Rousset set a high standard for the orchestra in this concert performance of Handel’s Agrippina. It was clear from the elaborate Overture that this was going to be a dynamic performance. The string section (led by Gilone Gaubert) in Les Talens Lyriques is phenomenal and there were excellent oboe interjections throughout the performance from Vincent Blanchard, including refined renditions of the intricate solo passages in the Overture and in several later arias. It is also worth mentioning the fine recorder playing, doubled by the oboists Vincent Blanchard and Jon Olaberria. The continuo section also deserve praise for their outstanding concentration and finesse throughout: Emmanuel Jacques (cello), Karl Nyhlin (theorbo), Stéphane Fuget (harpsichord) and Christophe Rousset (directing from the harpsichord).
I had played in six performances of Agrippina (staged) in the Deutsches Theatre in the Göttingen Händel Festival in 2015 and I knew that the difficulty in playing this type of trumpet part would be knowing (or remembering) exactly when the entries come within the opera. Our entries were sparsely spread out over the two hours of the first half. I had asked for copies of the score for the movements preceding our entries and the orchestra’s librarian had kindly provided these for us to follow which made locating our entries much easier. Our playing colleagues were also very helpful; without us asking or prompting them to, several of them would give us subtle knowing glances in the movement preceding our entries to make sure we knew where we were. Christophe Rousset also gave us a clear and supportive look several bars before our entrances. I was glad to have had the experience of playing this piece before at the Göttingen Händel Festival, but even if I had not known it already, I felt like I was in safe hands with such helpful colleagues looking out for us.

After an excellent concert, we enjoyed a drinks reception in the lobby of the Orchesterzentrum with the promoters of the festival.

The next day, the orchestra departed Dortmund by coach towards Halle (Saale). The next performance would be in the Halle Händel Festival with a different soprano performing the title role of Agrippina, Ann Hallenberg.

This was my fourth professional visit to Halle. Three of the four visits were to perform in the Halle Händel Festival: firstly playing the Coronation Anthems with Festspiel Orchester Göttingen in 2014, then with Solomon’s Knot playing the Dublin version of the Messiah in 2017 and now with Les Talens Lyriques performing Agrippina. The other occasion was a performance of Bach’s Christmas Oratorio in December 2016 with the Halle Händel Festspiele Orchester.
It was great to be back in this wonderful place. Handel keeps a watchful eye over the Marktplatz, the Marktkirche (where he learned to play the organ) and the Roter Turm, and the city has proud associations as the birthplace of George Frideric Handel and as the former home city of Wilhelm Friedemann Bach. 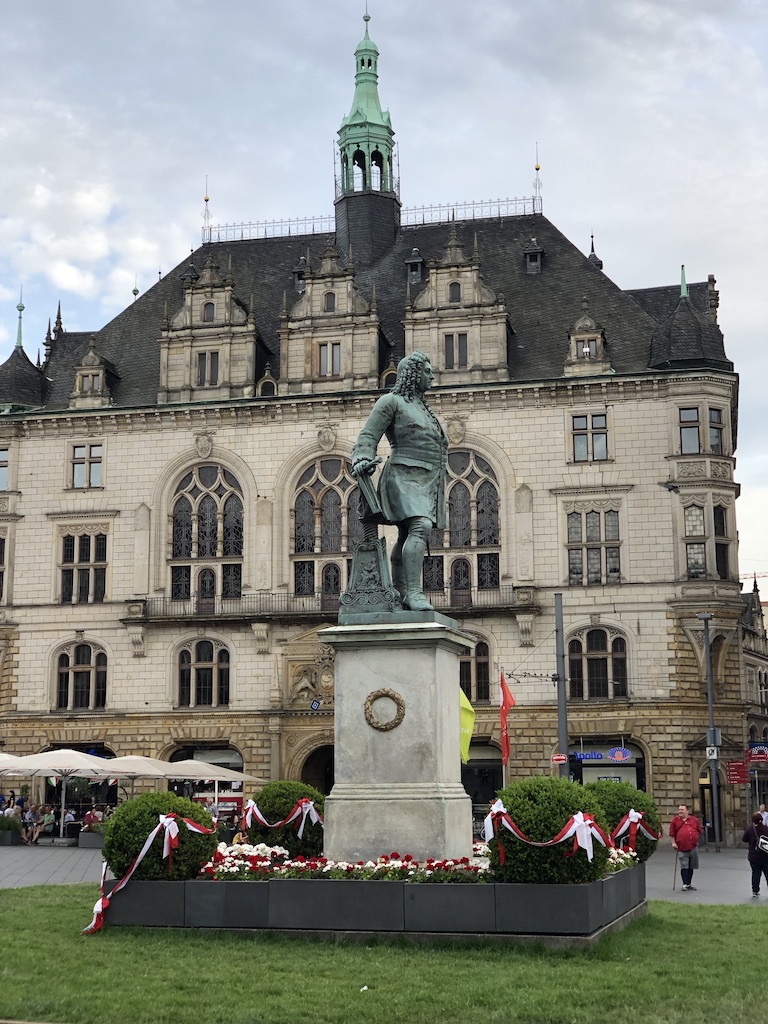 Our rehearsals on Sunday 9th June 2019 were used to familiarise ourselves with the new Agrippina and they took place in the Hallischer Saal of the Martin Luther University. The performance took place at 15:00 on Monday 10th June at the Konzerthalle St. Ulrichskirche, a well-equipped concert venue on Christian-Wolff-Straße. It had a large and reverberant acoustic. The hall was a church until 1976 when it was repurposed as a 500-seat concert venue. 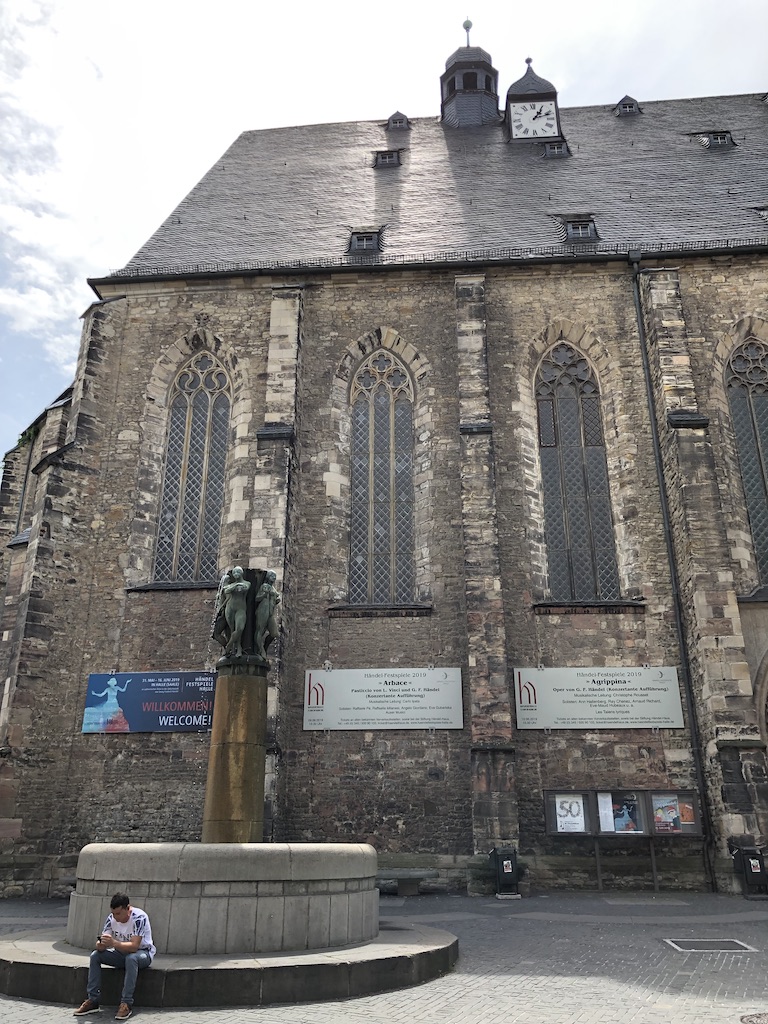 As the door that opened onto the stage was in close proximity to the trumpet section and Christophe Rousset had asked us to play while standing, we decided to remove the chairs from the stage and wait for our entries from an area offstage. This was much more comfortable for us as we could relax before our entries and it was probably less distracting for the audience for us to blow out all the condensation and water from our instruments before entering the stage. We moved at logical points in the music and the singers were often moving simultaneously. 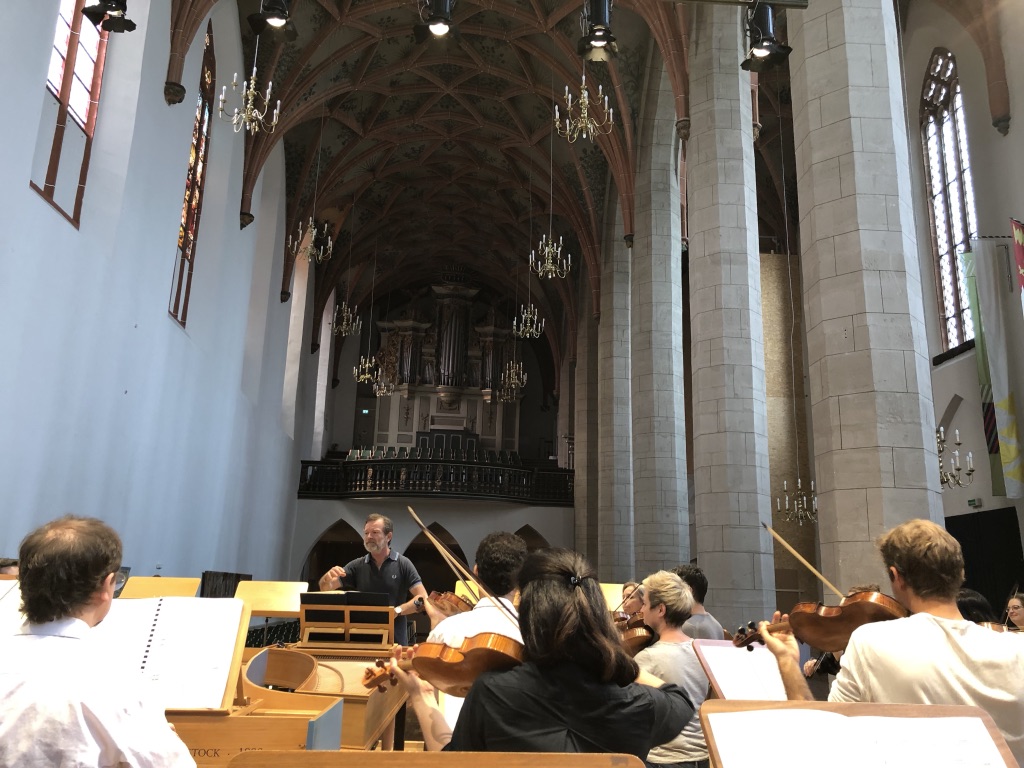 Although the role of the trumpets had been small, the feeling of job satisfaction was not diminished. Many people think playing less must be easier - but actually vigilance and concentration are required to know when to enter the stage, when to play and when to leave the stage. The playing itself must be precise and accurate - otherwise you can really damage your success rate, when expressed as a percentage of what you had to play for the whole performance. If you only play for a short time, you only have a few bars in which to have a musical effect on the audience. Finally, you do not have the luxury of feeling entirely settled (nor the instruments feeling properly acclimatised) in front of the audience. Preparation and experience are two very important factors when performing the trumpet parts for a Handel opera. 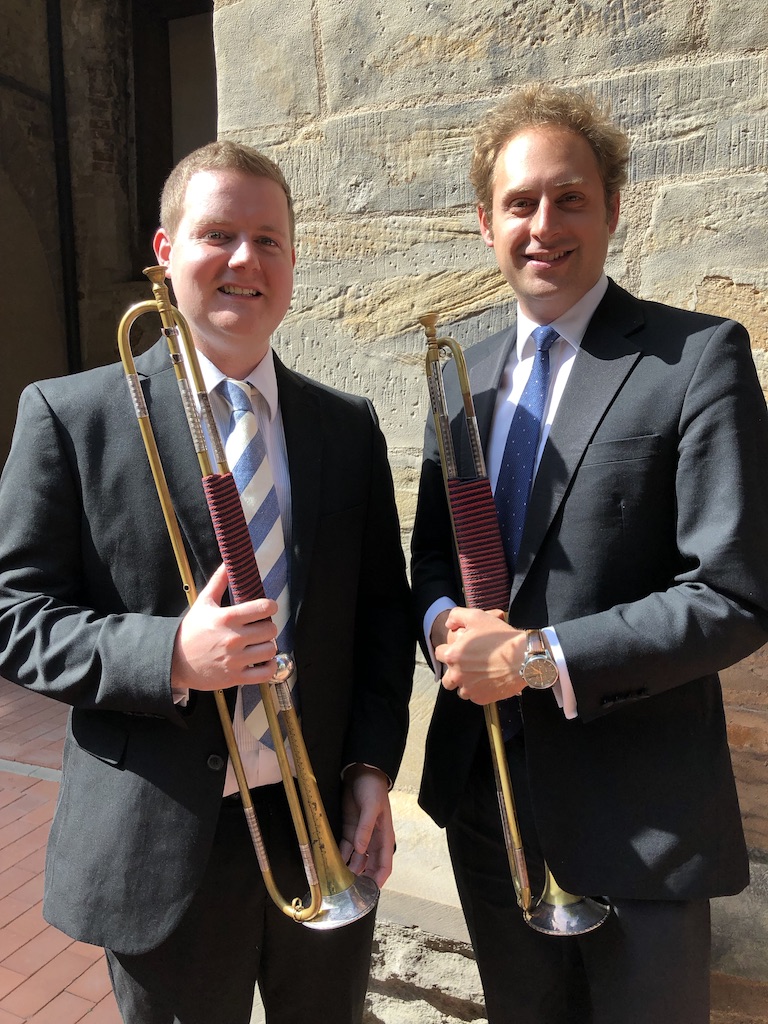 Having said all of the above, I’m amazed by the stamina of all the other players. This opera is very long, and even with a few carefully chosen cuts, it is still at least four hours long. Bravo to them all.


Will and I will rejoin Les Talens Lyriques later this month to revisit Mozart's La Betulia Liberata and the ensemble will be revisiting Agrippina later this year, to include a performance in Romania.