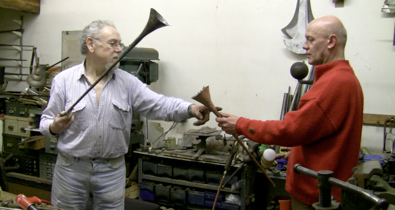 I currently have a natural trumpet which belongs to the Royal Northern College of Music (RNCM). I love the instrument (despite its characteristic scratches and dents) and will have to give it back in a year. I had been contemplating offering to buy it off the college, but I feared that as it is part of a set of two matching baroque trumpets it would be criminal to separate them.

It's made by a man called Frank Tomes, who has just retired from a long and very interesting career in making brass instruments. I met him for the first time in February (at his house with David Staff - his apprentice and my natural trumpet teacher) and I met him again in Scotland in July 2009 at the RSAMD and Edinburgh University where we were attending lectures on instrument making and the history of the trumpet. He is a lovely man and paid me the ultimate compliment when we were in Edinburgh. He said “you know, you’re the only person ever to have come to my house and play my instruments who played trumpet music on the trumpets, keyed bugle music on the keyed bugle, cornet music on the cornets and jazz music on the Jazzophone”.

I recently e-mailed Frank to send him some photographs of the trumpet events we attended together in July and inevitably got talking about trumpets. I told him (in jest) that I was planning to continue my studies at the RNCM just so that I could keep my current natural Trumpet (a Tomes!). Now that Frank has retired, I could think of no other way to get hold of a Tomes trumpet than to approach the college to see if they would sell theirs, which was when I received the following reply from Frank: “With regards to a trumpet I still have my last D/C Ehe unsold as I have been waiting for it to go to a good home. I couldn't hope for a better home for it than yours so if you would like it and can raise the readys then it is yours.”

David Staff, as I have already mentioned, is Frank’s apprentice and Frank is continuing to teach David all of the tricks of his trade. Having assumed that Frank had sold all of his instruments I had placed an order with Staffy for a D/C Ehe Trumpet and was hoping that he’d be in a position to be able to make a really good trumpet before I leave the RNCM and start my Postgraduate studies elsewhere (hopefully in London). However, learning the noble art of Trumpet making cannot be rushed, and although Staffy is an excellent successor to Frank, I wanted to have a trumpet which is similar to what I am used to, for the time being at least. I immediately e-mailed Staffy for his advice. His reply was really encouraging: “In haste, Russ that's great news. And what an honour to get the grand master's last. Go for it!!”

I told Frank that I feel very privileged to be offered his last trumpet and I shall think of his craftsmanship now every time I play the Messiah. The Bass recitative before The Trumpet Shall Sound finishes with the line “at the last trumpet”.
Brass Instrument Making, Trumpet
Russell Gilmour