Saturday, 19 Sep 2020, 11:00
During lockdown I had the idea of organising a natural trumpet course, when restrictions would allow, to ‘blow out the cobwebs’ after these many months of isolation.

Finally, in September, I was able to invite a hand-picked selection of amateur, semi-professional and professional natural trumpet players to two venues in Bedfordshire where we would play natural trumpets (without finger holes) as an ensemble, focusing on quality and refined playing as part of an educational and practical course.

I spent a long time organising the course, writing risk assessments (particularly for Covid-19 safety) and compiling course booklets and handouts. Every player had their own 54-page booklet of music to play from, which enabled suitable (2.2m+) social distancing, and we enjoyed a chronological array of repertoire and treatises from before 1598 to as late as 1891. The handout contained a list of all the pieces that we played over the weekend and a piece to play at home.

The course began on Saturday in Stewartby and the first day culminated with an intentionally audience-less and informal performance at an open-air church in a nearby village. We played a few favourite pieces from the first day of the course; music by Monteverdi, Schmeltzer, Riedl, and Dauverné resounded in the Bedfordshire countryside. There was a fantastic atmosphere and sense of achievement felt by all at the end of the first day, especially as this, for many, marked the end of a musical silence of six months or more.
‘Thank you so much for organising this weekend in spite of everything - I was deeply impressed. It made me so happy to be playing with other people again and it was needed more than I can say’ 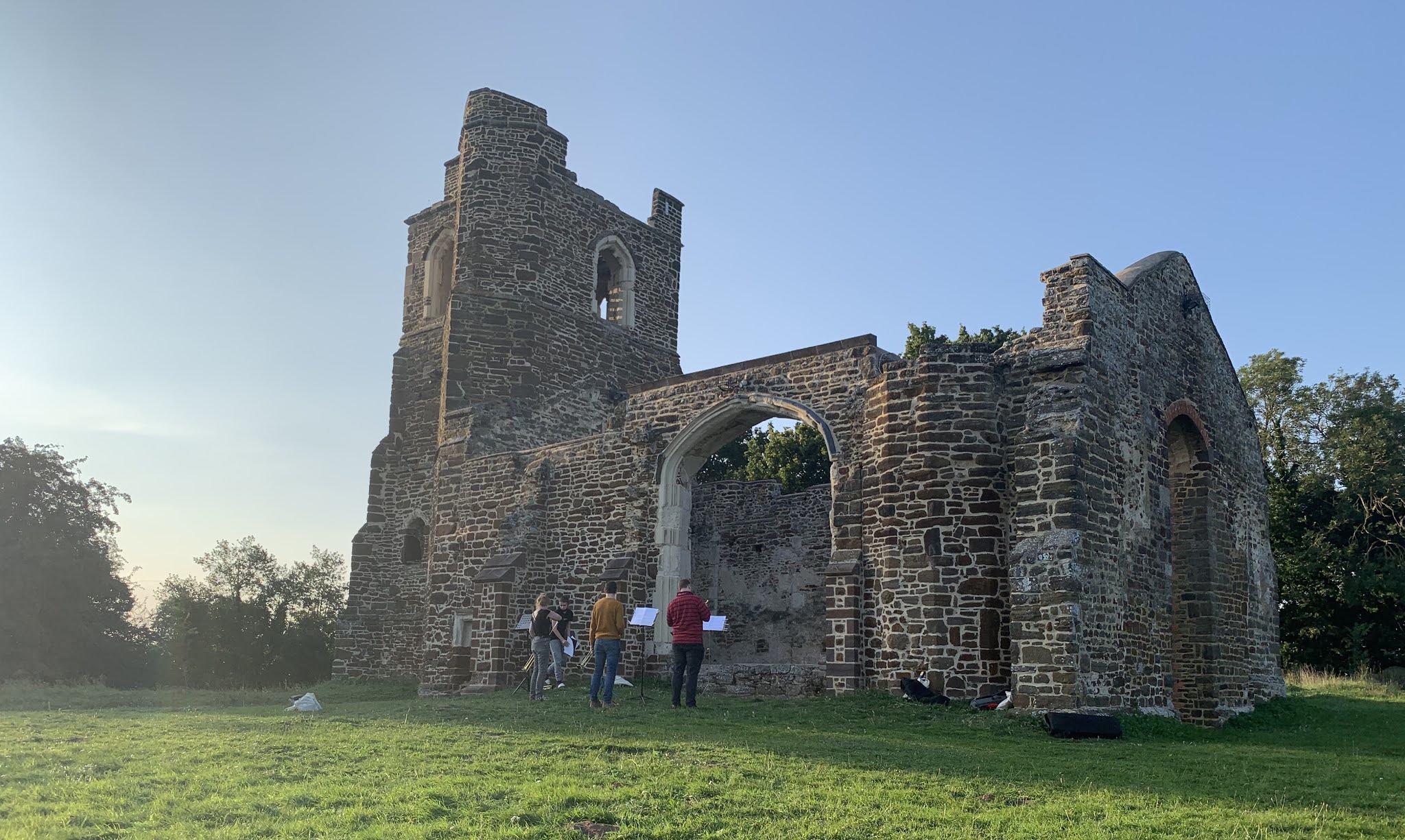 The second day of the course took place in Houghton Conquest. We were joined by professional timpanist Ben Fullbrook, who completed the ensemble and gave an informative introduction to the baroque timpani. All participants of the course had improved overnight, and it was particularly impressive to witness the incredible progress of two players who were playing the natural trumpet for the first time ever. We played lots of different pieces, including French Baroque music by Philidor, and Handel's Music for the Royal Fireworks. We also played music by Johann Ernst Altenburg, which provoked many interesting questions and highlighted an extreme of trumpet ensemble repertoire.

‘Russ kept things moving, and looked after the top and bottom end of ability ranges, including difficult as well as easy pieces to keep everybody engaged. The Altenburg was a worthwhile experiment, and gave the most advanced players a challenge.’

I am indebted to Sam Kinrade who helped me to set up and pack away, and undertake the many additional duties that Covid-19 regulations have enforced on such an endeavour. I thoroughly enjoyed organising and running the course, and the course participants have indicated that they would like me to organise another in the near future. I think this will become a regular fixture in the year - maybe even twice a year. If it can be done in this most difficult of years, I think the future of the course looks very promising.